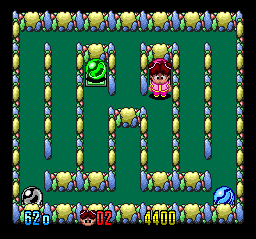 The Turbografx-16 was always the “other system” in the states, seeming to not have the popular titles that the Genesis and Super Nintendo had, while many of its popular titles were either already on or ported to other systems. However, looking through the something-hundred game library can net some interesting gems, and Chew Man Fu is certainly one of them. With its frantic ball-kicking and maze-running mechanics and oriental flavor, it’s certainly one of the more enjoyable non-shoot-em-up titles for the TurboGrafx-16.

In the game, the titular Chew Man Fu has set some sort of curse to rob the world of fried rice, egg rolls, and all the other favorite foods. To stop his reign of terror, the player must go through 500 mazes by placing four colored balls (red, green, blue, and black) on four different colored pads.

The gameplay is similar to the Sega arcade classic Pengo, in which the various mazes have enemies patrolling them. These range from porcupines to tortoises to Sasquatches. Unless the player has an extra hit power-up, one hit from these enemies will cause the player to lose a life. There is also a time limit added for extra challenge. While the player can pull and push the various balls regularly with the II button, they can also kick them into enemies with the I button and destroy them. However, the enemies will eventually respawn. The player can also kick balls to break walls or collect items, but if the ball bounces back to the player, it can push the player back, sometimes into an enemy which will kill the player. Through the mazes, the players can collect various items that do things ranging from providing points to giving an extra hit. In between levels, the player’s father/uncle/relative gives tips on how to beat the levels, some being in general and some being specific to the next level in particular. If the player beats the stage with a certain criteria, they get a certain amount of diamonds after each level. If the player loses all of their lives, they can exchange some of these diamonds for an extra life.

In addition to the standard one player mode, there is also a two player-mode, a kickball minigame, and a level editor. While the game itself is pretty fun in short bursts, it’s hard to imagine playing this for 500 rounds straight. The graphics are bright and colorful, the gameplay is as smooth as butter and certainly gets challenging later on, but the music isn’t really anything out of the ordinary but alright considering what the TurboGrafx-16 can do. While there are plenty of these maze action-puzzle games around, this is one of the better ones, and its unique and comedic style makes it worth checking out at least once. Since its original release on the TurboGrafx-16, the game has been released on the Wii Virtual Console in Japan and North America, and the Wii U Virtual Console in Japan, allowing an old and new generation to get the world’s tasty Asian foods back.