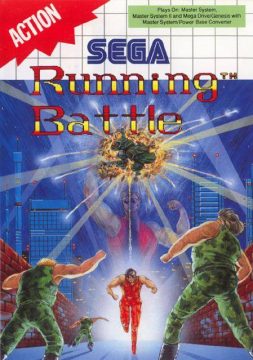 It shouldn’t be too difficult to goof up the basic premise of a beat-em-up when the basic premise is just to kick a bunch of bad guys’ butts. Whether entirely 2D or a 2.5D belt-scroller, beat-em-ups are all about meting out catharsis on any fools stupid enough to rush at you without weapons… and likely dying thanks to those which DO have weapons or are just really strong. The latter type of beat-em-us in the vein of Final Fight and Streets of Rage tend to have some tough enemies and big bosses which can really mess you on their own merits, but for the old-school type of 2D punchers-and-kickers like Kung-Fu Master and Bad Dudes, you move quickly, bad guys only take one hit or two, and you just keep rushing onward until you meet the boss of the level. Simple premise, right? Well, when you do something that you think is simple like pull the lever at a soft-serve ice cream machine, any number of things can screw up. You could put in too much or not enough, the flip may spill over the top of the bowl, and your toppings may fall onto the floor by accident. This premise applies to even the simplest of games, and the developers of Running Battle probably just gave up and sloppily gulped the ice cream right from the nozzle. Speaking of those developers, it was programmed by Opera House, a team mostly known for porting games (the PC Engine version of Shin Megami Tensei, the Genesis versions of Rastan Saga II and Midnight Resistance) rather than original work. 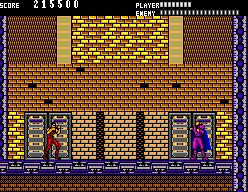 Released only for Europe as a late Sega Master System game, Running Battle is simply not great. It attempts to jazz things up with a story about how Sgt. Gray, a policeman of a near-future cityscape, beats up punks to avenge the death of his partner, Sgt. Brody. However, it’s all window dressing for a “walk forth and punch enemies” sort of game. Heck, there’s almost no reason to punch normal enemies; just hold onto the attack button and jump at them, and the length and speed of the automatic jump kick will do far more damage than your standard fist. The kick is so effective that you’ll likely glitch out and hit enemies in the face with your foot multiple times if you hold the attack button and hit them just right. Enemies will occasionally drop power-ups when whomped, like life boosters or a rare 1-up. Unlike most games of this make where your hero’s enough of a badass to refuse the use of firearms, Grey isn’t above that and gets to use two types of guns. The standard pistol comes with thirty shots and drops most mooks with ease, while the rifle only holds ten shots but can penetrate through several goons at once. There’s also an SS power-up which boosts your move speed for forty seconds, but it’s not quite as highly prized as the guns when it doesn’t enhance your ability to kill enemies. Another power makes you invincible for five seconds and causes you to run REALLY fast, even over pitfalls; however, if it just so happens to run out over a pitfall, well… you don’t instantly die, but you lose a fair chunk of life. Sadly, there’s not much else to the game beyond this; besides the normal enemies and the occasional turret or electrical barrier, you just keep moving right through several corridors which all look the same. 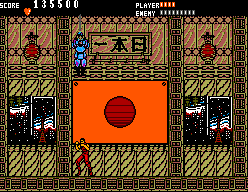 The boss fights should ideally inject some life into an otherwise banal action game, but they sadly fall short of this goal and just come off as really annoying. Take the first fight against Captain Brass, a midget pirate with a large sword and fleaman-like jumping abilities. Your prior strategy of spamming jump kicks flies out the window, as the jerk’s hitbox is a bit smaller than your standard fodder and kicks just sail right over him. It seems he’s also able to somehow instantly kill you if he jumps on you in just the right way. Fantastic. The next boss, Killer the Kid, is perhaps a bit less frustrating as he can be jump-kicked, but his penchant for rolling everywhere still makes him tough to hit, and you have to deal with flying bottles as well as his own gunshots. The third big bad, “Samrai Man” [sic] floats around everywhere like a top and summons lightning bolts when he feels like it, and he’s only vulnerable on the ground. You then move into the fourth and final level, which has absolutely no other enemies aside from the final two bosses. The first one, Milacle Man [sic again], just teleports everywhere while shooting stuff from his hands and having bricks fall everywhere. He’s actually kinda easy but takes a LOT of punishment for some reason, making him a tedious damage sponge. The final boss is against the big bad, Mr. M, piloting some sort of large gunship which also shoots electrical bolts and shrapnel bombs. It takes a whopping sixty kicks aimed at the cockpit to bring down (indicated by a numerical life meter on the bottom-right of the screen), and toppling the metal beast gives you a mere one-screen ending. It changes depending on whether or not you find a certain character in the final level by flipping a switch, but neither is very satisfying. 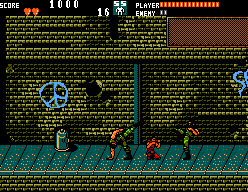 So Running Battle has horribly banal gameplay, coupled with some janky scrolling and lame boss battles. Even its graphics aren’t anything too impressive, albeit they certainly get the job done, but the repetitive nature of most levels’ corridors brings down its visual quality. The only really decent part is the music, which is alright for the Master System’s processor but there’s not much variety to the music outside of the main stage theme. The final topper to Running Battle‘s overall mediocrity is the fact that it was completely outdone by Black Belt, the 2D beat-em-up based off of Hokuto no Ken in Japan. This is particularly worth noting as Black Belt came out FIVE years prior to Running Battle, and yet still stands out as the superior game after those five years passed. Sure, it too is a bit repetitive, but it has far more frequent breaks from its standard goon action by interjecting several mid-bosses per level, as well as having some real cool boss fights that feel tough but not too cheap. Running Battle has none of that and it is forgotten today hence.