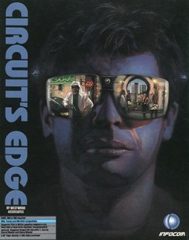 Circuit’s Edge is an interesting adventure/RPG hybrid published by Activision under their Infocom label, and developed by Westwood Studios. Based on George Alec Effinger’s 1987 book When Gravity Fails, it takes place in a dystopic cyberpunk future which, like most of the sort, owes a tremendous debt to William Gibson’s Neuromancer. The major difference is that instead of the world being overtaken by the Japanese, it’s instead been influenced by Islamic culture. Otherwise it’s the same dank pisshole we’ve come to expect; save for the few rich everyone else lives in the slums, with their only satisfactions being gambling, drugs, and prostitutes.

You control Marid Audra who, per usual pulp standards, is a down-on-his luck detective who has resorted to running goods for his pals. During a seemingly innocuous delivery you find your client dead, presumably murdered. The police arrive at the exact wrong moment and you are implicated in his murder, but thankfully the powerful mafia ruler Friedlander Bey gets you off the hook. In exchange for his aid he gives you a case: the murdered man is his assistant, and his death seems to be an attack against the city’s rulership. And so you set off on an investigation into the seedy underground of a city known only as the “Budayeen”.

The storyline in Circuit’s Edge isn’t particularly compelling – it’s decent enough, but still a fairly run-of-the-mill pot boiler. The gameplay isn’t all that enthralling either. This aspect leans more towards the RPG end of the spectrum, as real puzzles are sparse and most of the time is simply spent running to different cafes and bars, talking to people, and finding leads. You need to keep yourself adequately fed and rested as well. You’ll also end up gambling, beating up punks and selling junk to get enough money to buy cybernetic modifications called “moddies”, which can be equipped to improve various skills, like combat and hacking. You can be randomly attacked by muggers, but winning these fights usually just requires that you’ve installed the proper equipment. There are a handful of hacking segments, but they’re more realistic than the virtual reality depictions seen in the Neuromancer game.

The interface is cluttered, with a small graphical window showing your location, another smaller window showing either your face or the face of the person you’re talking too, a Windows-style menu bar at the top, a mini-map in the lower right, and a cramped space for the narrative text. Although you can use a mouse for various functions, you can’t actually interact with anything by clicking on it, instead requiring that you pick actions from the menu bar. Movement is handled similar to a first person dungeon crawler, with the sprawling city set up like a gigantic grid and the arrow keys used to turn or move block by block. Although there is a map function it’s mostly useless since nothing is labeled, instead requiring that you refer to the manual to figure out where everything in the city is. Not all of the events are linear, making it relatively freeform compared to a standard adventure game. The game runs in real-time, meaning certain people are at certain places during certain times (strangely, most businesses are closed during the day) and it is entirely possible to miss stuff if you take too long. More annoyingly you can only save your game in your apartment, and there is only a single save slot.

But while the story is standard and the interface is a pain, Circuit’s Edge really nails the atmosphere. The 16-color graphics are perfect to depict the city’s grittiness, and the music, while sparse, is appropriately moody. It’s quite progressive for a game from 1990 – there’s quite a bit of nudity, many of the females (including your quasi-girlfriend Yasmin) are “sexchanges”, and you can sleep with practically anything or even light up. (The game’s taxi driver has his lungs replaced with a device that makes him permanently stoned.) However, if you kill someone unnecessarily or partake in drugs, your benefactor will have no problem with taking your hide.

There are over 60 locations in The Budayeen, not counting the places you can get to by cab. You can easily spend the first few hours trawling the bars, chatting with the proprietors, trying to pick up hookers, gambling and watching holo peep shows, just taking in the game world. Sure, the visual depictions tend to repeat after awhile, but each location has its own unique description and background, and the writing is easily on par with Infocom’s better games, even possessing the same wry sense of humor. (Try watching the porno about the touching story of a Turkish girl and her camel.) While the interaction is somewhat limited – conversation is restricted to randomly chosen responses and inquiries for plot-related keywords, which need to be typed in – but there’s enough depth to the hellhole that is the Budayeen to make Circuit’s Edge worthwhile, even decades later. It also holds up better than Interplay’s version of Neuromancer. As a whole, Circuit’s Edge flounders as an RPG but succeeds as a work of interactive fiction.