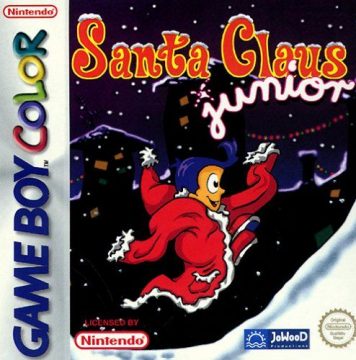 German developer NEON Software is perhaps best known for their PS2 cult title Legend of Kay, but they were also quite prolific during the late 90s as they made many games for the Game Boy Color. While most of these were based on licenses such as Maya the Bee, Tabaluga, and Pumuckl, they put out a pair of original platformers called Santa Claus Junior for the Color and Santa Claus Jr. Advance for the… well, Advance. Both of these games are surprisingly different from each other despite having the same Christmas-themed concept, but they’re both likeable, straightforward games worth checking out.

On Christmas Eve, a young boy called Nick is still awake, playing his Game Boy, when he looks out his window and finds Santa Claus being kidnapped by an evil witch. A fairy called Flöckchen asks him for his help, telling him of the witch’s castle deep in the woods where Santa is being kept. Donning the robes left behind, Nick sets out to rescue Santa and defeat the witch.

Santa Claus Junior is a very basic platformer, where you have to reach the end of the level. You can jump and climb up objects, and jump onto most enemies as long as they’re not openly hazardous on top. Otherwise, your main focus is on platforming and navigating levels. There are candy canes dotted about all over the place, and collecting 25 will give you a new life or restore your health to full if you’ve taken some damage. You can also find presents hidden in certain areas, though all these do is unlock a sound test at the end of the game after you’ve collected enough.

Still, these collectables encourage you to explore the stages, which is worth doing so that you can grab as many lives as possible. This is mainly thanks to how challenging the game gets as it goes on, starting from the third stage and slowly getting tougher until you reach the very challenging final levels. You’ll need good reflexes and planning to navigate tricky platforming sections and sometimes devious enemy placements that border on overwhelming, but it tends to be mostly manageable if you’re patient and take your time.

There’s also a few concessions offered: levels tend to have a few checkpoints or can be beaten quickly, you retain the number of candy canes you had upon dying so you can grab more, and a password system is available. You get passwords at the end of every level, and they’re short enough so you don’t have to worry about keeping track of them. However, the passwords also track everything about your playthrough, including your lives count and how much health you have (which doesn’t refill between stages), so you could end up in a situation where you’re stuck in a dead end with one life and barely any health.

This doesn’t seem so bad, except that the game doesn’t offer any continues. Lose all your lives and it’s back to the main menu. Screw things up badly enough with the passwords, and you might have to start the entire game over. There are three difficulty settings from the menu, but they only impact how many lives you have, so you may as well stick to having the maximum amount unless you really fancy a challenge. The password system is well-intentioned, but ends up making things far too difficult. (Also, you have to re-enter the password when you’re booted to the menu, which is an irritating inconvenience.)

Thankfully, Santa Claus Junior is still worth playing for how enjoyable it is. For one thing, it’s worth praising how the game doesn’t use any text apart from the passwords; even the menu uses only icons for its various options. This means that anybody from around the world can play without needing to read or understand any text.

While moving around is a bit slow since you walk everywhere, the straightforward mechanics make for a game to quickly get into and enjoy. This is complemented by solid controls that let you respond to danger in time, level designs that offer a mix of challenging linear stages and more open-ended locales with secret areas, and an overall conciseness in the pacing that ensures nothing overstays its welcome. It’ll only take about an hour or a little over to beat, but that’s fine when every idea is satisfyingly explored.

Visually, there’s plenty to like with cute characters, a varied use of colours between stages and a solid consistent framerate that lets it play well. What’s particularly noteworthy is how the stage theming progresses in a naturalistic way, leading from the boy’s house through the city into the woods and up to the witch’s castle. This is aided by how increasingly spooky and strange the mood becomes, with weirder enemies, somewhat unnerving backgrounds and tenser music adding to the atmosphere.

On that subject, the soundtrack by Allister Brimble (who has composed for countless games since the late 80s including Superfrog and the Rollercoaster Tycoon series) and Will Davis fits the game quite well with a mix upbeat jaunty tunes and more spooky pieces for the back half. If you’re a fan of that distinct Commodore 64-style sound that appeared in many European GB games, this is pretty decent, though it can become quite abrasive if you’re not.