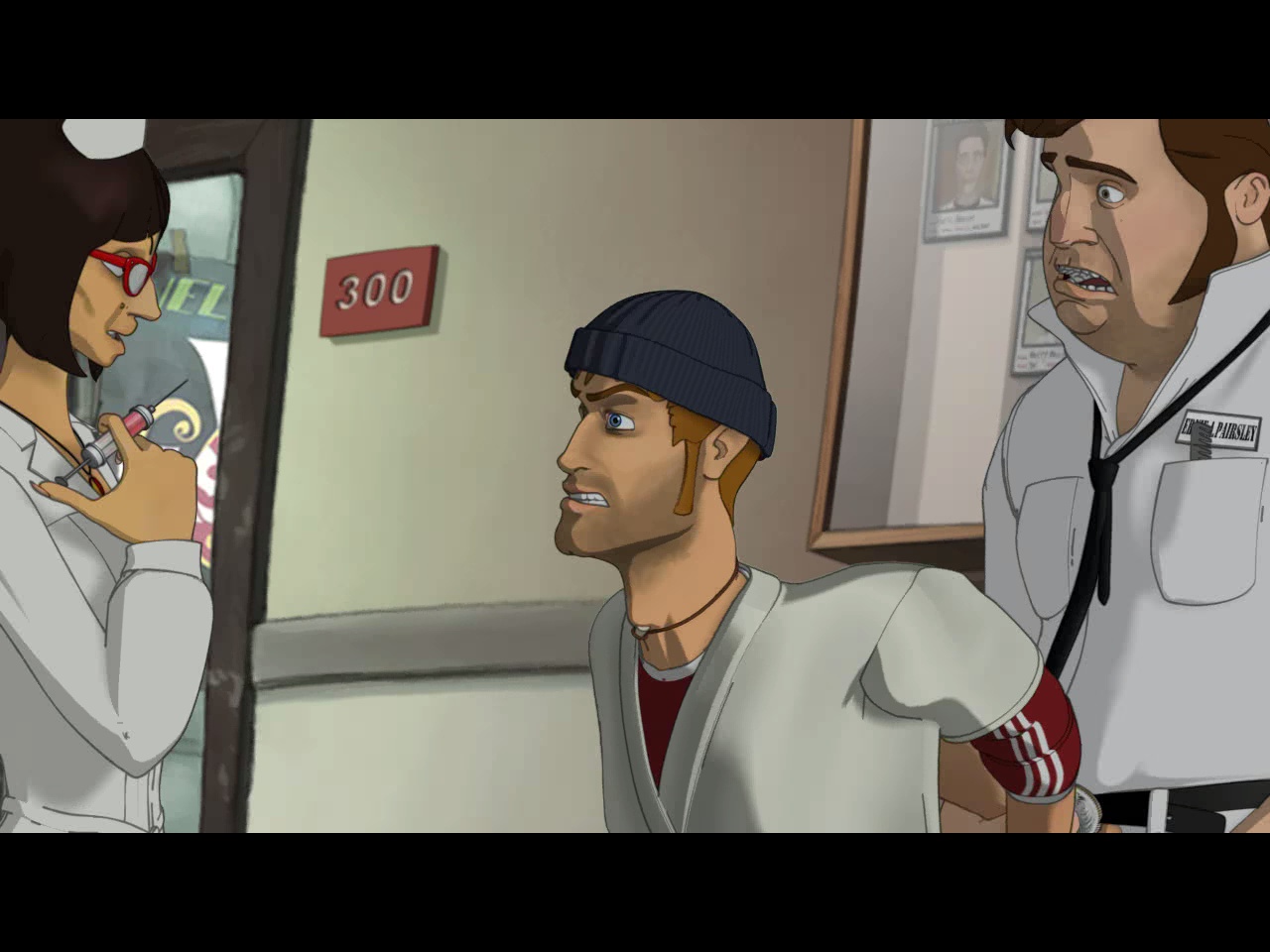 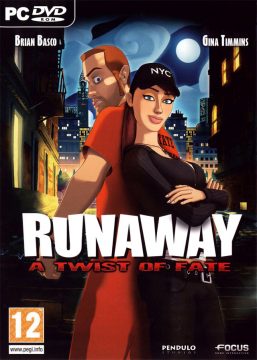 Pendulo followed up with the third Runaway game, released in late 2009. Rather than picking up immediately where its predecessor left off, Runaway: A Twist of Fate begins on a seemingly unrelated note. Brian (who’s been again redesigned to look a bit more thuggish) is held on trial for the murder of Colonel Kordsmeier, the army chief on Mala Island. He’s a bit of a wreck, with no memories of what happened directly after the events of the second game, so he’s checked into a mental institution, where he’s killed under mysterious circumstances. But not really, of course – it’s just a cover so Brian can escape and figure out who framed him. Meanwhile, Gina, who apparently escaped unharmed, begins an adventure of her own to discover what happened to Brian, and ends up investigating a different, although related, murder. She has no memory of the past either, and a good chunk of the game involves both of them piecing together parts of the puzzle.

The whole bit is a very clever way to structure the game, since it provides more motivation for the player to move forward, and it’s much more involving than its predecessors. But one can’t help but feel as if the developers lost interest in the supernatural setting of The Dream of the Turtle and wanted to do something different. A Twist of Fate feels closer in tone to the first game, being more of a darker murder mystery, right down to the assassins that are tracking down the heroes, and the only supernatural components are the scenes that deal directly with its predecessor. Despite the fact that the aliens are the driving factor of the plot, you never directly interact with any of them, and they only show up in a few cutscenes. It doesn’t negatively affect the storytelling, it’s just strange. Thankfully, the game resolves all of the dangling ends from its predecessor, especially Tarantula, who plays a pretty strong role in this game. A Twist of Fate also finally fleshes out Gina, and the chapters switch back and forth between her stories and the flashbacks of Brian escaping from the sanitarium. It’s great that she’s actually more than a damsel-in-distress here, although other than a few references to her pole-dancing past, she’s actually not that much more different than a female version of Brian. 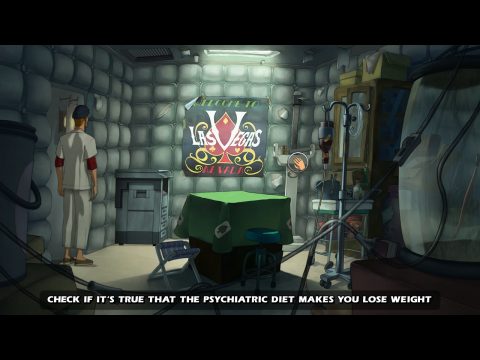 It’s not only the narrative that’s improved – Pendulo has really taken into account the criticisms of the earlier games and fixed a lot of the problems. The puzzles are still occasionally a bit off, but they are easier, and at least a bit funnier. One of the first tasks Gina has to do is translate a Swedish instruction manual. (Never mind that the IKEA-style pamphlets that are being parodied are, in reality, entirely illustrated, but let’s roll with it.) The first chapter takes place entirely in a graveyard, and you can’t leave. As Gina determines, the only way to solve this puzzle is to find a Swedish person buried somewhere in the graveyard, get the local paranormal expert to channel his spirit, and get the soul of the dead to translate it. That’s the sort of bizarrely overcomplicated situation that the series has devolved into on many occasions – except when you actually convince the spirit medium to conduct her ceremony, she exposes herself as a fraud, pulls out a Swedish-to-English dictionary and translates it herself in an attempt to cover her ass. Hey, there’s an actual punchline in there! The ridiculous puzzles in LucasArts games tended to be forgivable because their solutions were funny, and Pendulo finally picked up on that. Furthermore, it’s not even a particularly difficult puzzle, because Gina comes to most of the conclusions herself just by looking around, gently guiding the player to the correct solution. It’s certainly much better than the time fork.

Indeed, the whole game is much more user-friendly. The new hotspot indicator is a very welcome addition, and there’s an online hint function for pretty much every step of the way. Here, Joshua is confined to the role of a customer service representative deep in the bowels of Pendulo Studios, and he even offers some (fictional?) stories about the game’s development. Otherwise, he doesn’t play any real role in the plot, which is definitely for the game’s betterment.

The writing as a whole has improved a bit too. It still occasionally tries to be humorous and does a bad job of it, but most of the annoying aspects of the original are gone. The new wacky sidekick this time is Gabbo, Brian’s buddy from the insane asylum, who looks more than a bit like Steve Buscemi. Making him randomly shout “Banana!” at the end of every other sentence isn’t funny, but his references and parodies of action movie heroes prove a bit more endearing, and he’s used sparsely throughout the story. Brian’s other buddies at the sanitarium, and the ways to manipulate them, prove slightly amusing too. The voice acting cast is totally new, and while fans of the older games might be put off by the change, the new voices for Brian and Gina are definitely an improvement. Although the game is still six chapters long, it’s fairly short, and given that the puzzles aren’t as obtuse as the previous games, they go by pretty quickly. The upside is that it’s much better paced, and feels less tedious as a whole. 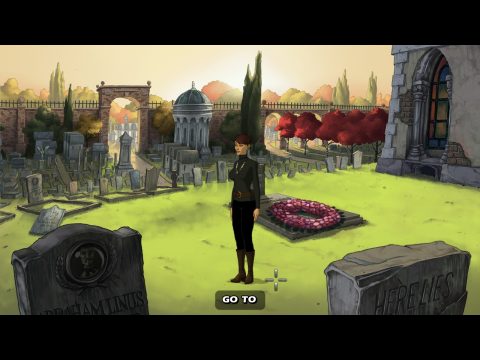 The graphics are technically on the same level as The Dream of the Turtle, and so the game still looks quite good. Given that a good chunk of the game is set in insane asylums and dirty back alleys, it’s not as scenic as the jungles and deserts from the previous games, but it manages to be attractive nonetheless. Vera Dominguez returns to sing the title song, too, which again, is quite catchy.

Although A Twist of Fate is hardly a classic, it’s still the best of the trilogy. The puzzles aren’t as frustrating, the characters are actually likable, the plot’s more engrossing, and the dialogue, while still not fantastic, isn’t nearly as awkward. Despite being the third in a trilogy and heavily connected to its predecessor (although not initially), it’s probably the best place for a newbie to jump in, because the quality really is quite a bit higher.

Runaway: The Dream of the Turtle