What an unfortunate name. Rodland is one of those single-screen arcade-style games like Bubble Bobble or Snow Bros. Like these, the goal is to kill all of the enemies on screen before they kill you. Here, you control one of two fairies (the Japanese part of the title means “Fairy Story”) named Rin and Tam, whose goal is to climb this magic tower, where their mother has been imprisoned. These cute little pastel buggers dispose of their foes by grabbing them with their magic wand and slamming them into the pavement repeatedly. Which is pretty amusing, all things considering, and much more direct than trapping them in bubbles or rolling them in snow. 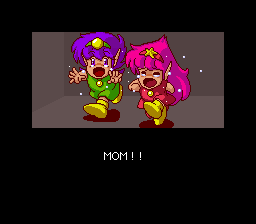 The catch, of course, is that you can only grab one enemy at a time. It takes a few slams to kill anything, so you’ll often get stuck in Dig Dug-like situations where you grab a foe and toss them to the other side, where they’ll be momentarily stunned, and then take out the next foe. Enemies can be stunned by other enemies that you’ve grabbed, but not killed, which also plays an important part in the strategy. You can’t jump, at least in most of the versions, but you can create small ladders (out of rainbows) that let you climb between the platforms. Some of the high-reaching locations can only be reached by riding on top of balloons, which float from the bottom of the screen in certain stages. Later on, you’ll also find doors which warp you around the screen. You also need to kill the enemies are soon as possible, before “Meanie Mode” is activated, which floods the screen with tons of difficult baddies, thus practically dooming you. 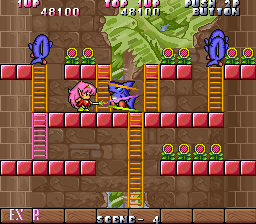 Beneath all of this cute-yet-slightly-sadistic crushing are some interesting scoring mechanics. Any foe, when killed, will randomly drop a weapon, which will automatically be activated when you pick it up. These include bombs, which take out everything in the immediate area; dynamite, which sends waves crashing left and right; tiny little while balls, which bounce around the screen; missiles, which charge straight forward; and “B” balls, which also bounce around a bit. Any enemy that’s killed by one of these subweapons will drop a fruit icon, which will grant many more points than killing them out right.

The screen is also filled with flowers, which grant increasing score bonus as you pick them up in succession, a la Mr. Do. If you grab all of the flowers in the stage, the enemies turn into what appear to be blood drops (or maybe peaches? It’s hard to tell.) Any enemy you kill will drop a letter. If you spell out EXTRA, you’ll get a bonus life. Handy! Of course, if you spend too long in a given stage, all of the enemies will turn nasty and become harder to kill. As you progress through the game, there are a few boss fights, although they don’t really take advantage of any of the more interesting mechanics. They get progressively weirder, consisting of alligators, whales and elephants, culminating in a multi-state battle where you need to fight several forms of a Minotaur, who eventually grows to the height of the entire screen while donning wings and a suit of armor. It’s a bit like the Cyberdemon from Doom, if it had been designed by a ten year old idiot, but it’s all the more charming because of it. 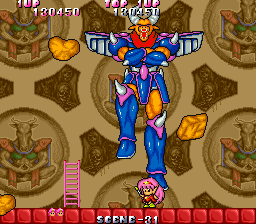 There’s also a “hidden” extra mode, which consists of 31 more stages, complete with new backgrounds, enemies, boss battles and story scenes. This time, you need to find your lost father, who went off exploring in a pyramid and promptly disappeared. So, instead of climb up a tower, you’re delving down into the Egyptian underground, which is apparently populated by robots and other assorted mecha. But that’s not the weirdest part.

When you conquer this mode, you learn that your father is actually dead, but his spirit lives on in the stars or something like that. In the grand context of Japanese media, it’s not that strange, considering the several dozen anime/manga wherein a main-ish character gets killed, and the surviving characters sit around and lament their departed buddy’s sacrifice, and then there’s a transparent image of them superimposed on the sun. It’s a huge cliche. But you almost never see this sort of stuff in the ending sequence of video games. Imagine that Nintendo made a game where Mario defeats Bowser, and he finds Princess Peach, poisoned, lying on a bed, telling Mario with her last breath that she loves him…and then the game ends. This is sort of devious plot that child psychologists must concoct in order to increase their clientele. Of course, Rodland can do this because it’s a no-name game that doesn’t have twenty-odd some years of history behind it, so it’s just eyebrow-raising as opposed to soul-destroying. (Although, Conker’s Bad Fur Day did something similar years later, but it was also aimed towards adults, and darkly Britishly humorous anyway, not cutesy little fairy things who just learned that their equally cutesy fairy dad has bit the dust.) 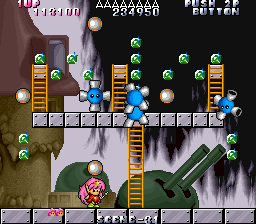 Rodland is a fun if slightly unremarkable game, but it was quite popular in Europe, where it was ported to several home platforms, as well as the NES/Famicom and Game Boy, by Sales Curve and published by Jaleco. (It was not released in North America.) 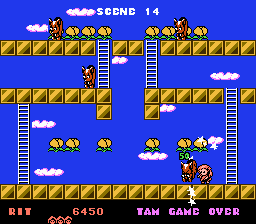 Like many 8-bit console ports, the NES version takes the template of the arcade game and does its own thing, and it really works for the better. The basics are much the same, except the sprites are much smaller, the action is much tighter, and the speed is quite a bit faster. Slamming enemies into the ground is actually a lot more satisfying, and the screen feels less cluttered, even though there are generally even more enemies at once. There’s also a rather thorough option screen, which lets you enable the ability to jump, alter the color of the characters, or change their names (which blink exuberantly on the status bar at the bottom of the screen, complete with a question mark. Also put in something dirty like SHT, SEX or VAJ and their face will turn read…strangely, they don’t react to ASS.) 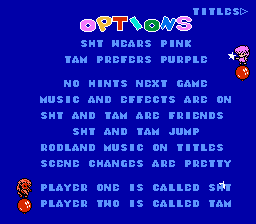 The soundtrack is also much, much better. The arcade game sounded like bootleg circus music – not the “amusing childlike wonder” kind, but the “scary Stabby the Clown” kind. The NES is bouncy without being annoying, and sounds like Commodore 64 SID chip music, giving it a very distinctive European feel. (The actual Commodore 64 music uses a few of the same songs, but sounds a bit different.) It actually sounds even better if you’re playing the European version on an emulator on the NTSC setting, because it speeds it up a bit. 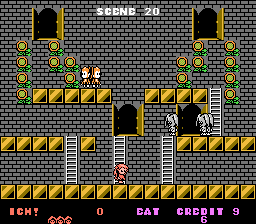 The visuals don’t change much either – halfway through the game, the background changes from “sky blue” to “castle wall”, and that’s about all the variation there is. Some of the boss encounters have been unwisely extended with brief side-scrolling action segments, which really don’t work well with the mechanics. Your credits are limited, but at least it keeps the game from getting too easy, and gives you an incentive to try for the bonus modes. The NES version is actually one of the most expensive officially released titles available in Europe, so it’s much more economical to track down the Japanese Famicom release, although its large shape means that it won’t work on standard toaster NES consoles, even with a converter.

The Amiga and Atari ST versions are the closest to the original arcade, offering up an even brighter color palette and marginally less irritating music. The difficulty is even toned down a bit. The Commodore 64 port looks somewhat similar to NES game, minus its extras, but plays a bit slower. The Amstrad version moves at a snail’s pace. The Game Boy version actually features a background, unlike the NES port, but the levels themselves are a bit larger and the screen needs to scroll to keep up. This hampers the pacing, especially since you can’t see all of the enemies on the stage at all times. However, you can use your wand while on climbing, which makes things a bit easier. There’s also a mobile remake for Sybian mobile phones, released in 2006. None of the ports appear to have the extra mode, and if any of them do, it sure is hidden. All of the European releases have the same terrifying cover, which appears as if Rainbow Brite had mated with those ugly Troll things from the 90s. In 2011, DotEmu released Rod Land: A Fairy Tale for iOS, which is just a port of the arcade game with touch controls.

Although Rod Land never got a real sequel, the characters did pop up in another Jaleco title, the puzzle game Soldam. This was even remade for the Nintendo Switch in 2017. 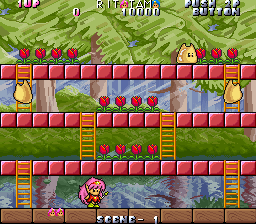 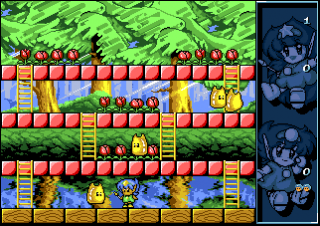 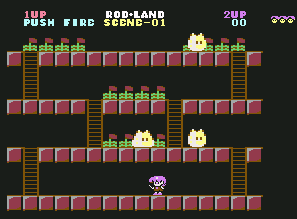 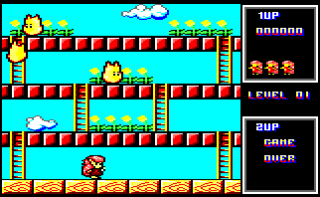 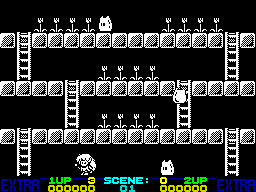 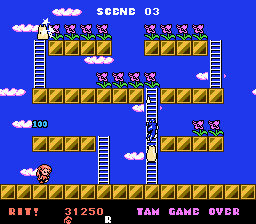