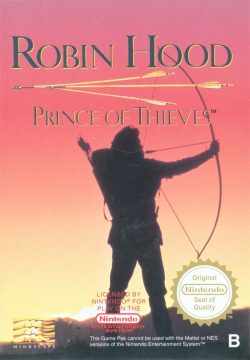 The legend of Robin Hood and his Merry Men has inspired tons of games over the years, but one of the more interesting is Robin Hood: Prince of Thieves released for the NES and Game Boy in 1991. Based off the film from the same year best known for Kevin Costner’s dodgy accent and Alan Rickman’s scene chewing, the game combines action, RPG, and horse riding gameplay into a “movie game” that’s hard to forget. Many lines of dialogue are lifted straight from the film, and the music by Paul Webb has a nice medieval flavor. This is no slapdash side-scroller in the vein of Cliffhanger or Total Recall. Instead, Robin Hood: Prince of Thieves mashes up genres into a fun adventure whose sum is greater than it parts. 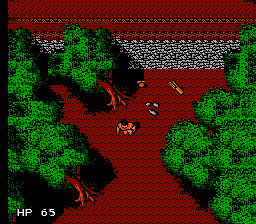 Things start off just like the movie. Sir Robin of Locksley is captured in some Arab Dungeons in Jerusalem. With the aid of a few prisoners, he eventually makes his way back to England. This first quest does a good job at introducing the player to the different modes in the game. Most of the game takes place from a top-down perspective where you control Robin Hood himself. Much like the Dragon Quest or Ultima games, you interact with the environment with a series of verbs (in this case, Talk, Look, Take, Search, Player, and Exit; the Exit option makes the menu vanish). For instance, to loot a corpse, you would first Search to see if there was treasure to grab. Then, to actually add it to your inventory, you would Take the treasure. 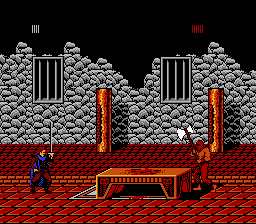 After picking up a sword, stabbing a guard, and freeing some prisoners, you have to duel against the prison guard. Gameplay switches to a basic version of Street Fighter where you can attack, dodge, and leap onto tables to combat the enemy. It’s not the deepest system around, but the large character graphics really make it stand out. If you beat the prison guard, you escape through a maze. At the very end is a large melee battle which resembles a simplistic real-time strategy game. You control Robin Hood, but if you die you can control another member of your party. There’s a nice sense of scope as your party gets rushed by a dozen guards. 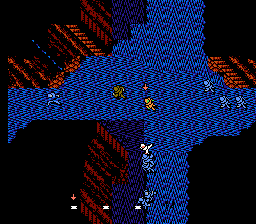 Although Robin Hood: Prince of Thieves does nothing to teach you how to navigate these different gameplay modes (the manual is little help either), this first quest eases you into it. Things only get harder from here. After your party reaches England and you start to form your band of Merry Men, the gameplay has a nice loop to it. After talking to a fellow with a hat at your woodland base, you head off into Sherwood Forest to go on your next quest. After navigating a brief forest maze, you have to complete a mission that involves either a maze, a duel, a melee battle, or some combination thereof. These quests either hew to the movie’s plot (Battle the Celts) or go in a more fantastical direction (Fight a Giant Boar), and none are optional. 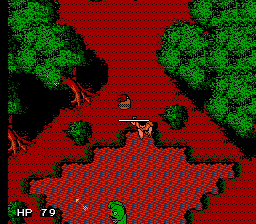 The overhead combat in the game is pretty simple, reminiscent of Gauntlet or The Legend of Zelda. If you are equipped with a sword, you have to get close to the enemy to hit them. If you have the more famous bow and arrow, you attack from a distance albeit with limited ammo. In general, using a sword is the best way to kill enemies. The trade-off comes when you fight enemy guards with crossbows. They fire arrows at you at such high speeds that equipping the sluggish bow and arrow is a must to pick them off at a distance. You gain a modest amount of XP from killing enemies, and can gain levels after killing dozens of them. Those looking for stat boosts from grinding will be let down as all you get is a much-needed HP boost. 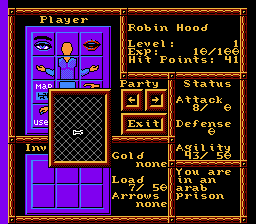 If you want to heal your characters or equip them with items, the interface gets a lot more complicated. After choosing Player from the Menu, you are taken to a paper doll interface reminiscent of Ultima VI: The False Prophetwhere you can slowly drag items to equip them (dragging a sword onto a free hand), eat them (dragging a loaf of bread onto your mouth), or use them (dragging them onto the Use icon). As complicated as this menu is, there are some things curiously missing: you can’t view a party member’s max HP, and the Map button only provides a limited view. Although you gain and lose party members throughout the game, their stats only matter in the rare melee battles. More often than not, NPCs like Kaseem or Duncan are mere inventory mules to hold excess food or potions. You can heal individual party members, but the health of Robin Hood matters most of all. You can cycle through different party members in the Party screen, but there’s little point to it other than shuffling inventory around.

There are even has some adventure game style puzzles in there. In true fashion of the time, if you get rid of certain items or forget to pick them up, you’ll be stuck later in the game with no recourse but to start over. If you remember the old adage “pick up everything that’s not nailed down” and hang on to all your weapons or any funky items, you’ll do OK. At a few points in the game, you have to do a horse riding minigame in which you have to hop over rocks. Think of the infamous Battletoads speeder-bike level, but a lot easier and shorter. As far as Nintendo games go, this one can take a handful of hours to beat. You get a limited number of continues, which comes off as a beat cheap given the nature of the game. There’s no save system, but there’s a hidden Password feature you can get to by pressing A eight times followed by B eight times on the title screen. You’ll have to find a FAQ to get the passwords to skip to the desired level. 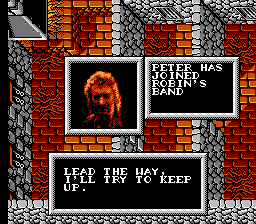 Even though the NES has a limited color palette, it uses greens, grays, and browns well enough to convey the verdant forests and regal castles on display. In particular, the exteriors of the castles give a nice sense of scale. Even more impressive are the character portraits used in conversation, which look far more realistic than graphics at the time due to a stippling effect. Even though they failed to secure the likeness of the actors in the movie, they look like real people and help you empathize with adventures at hand. Paul Webb’s score fits the flavor of the game perfectly, whether it’s the driving bass line of the title screen music to the more pastoral music you hear on the Player screen. Those looking for chiptune renditions of the Bryan Adams hit “(Everything I Do) I Do It For You” will be let down.

As a whole, Robin Hood: Prince of Thieves is a fun action-RPG that mixes genres, has varied quests, and lets you relive the movie in 8-bit fashion. There are certainly issues when it comes to controls and visuals – the game has become kind of a punching bag among the retro scene for its intensely muddy character portraits among other things – but its ambitions are still something to be admired.

Bits Studios worked on the Game Boy port of the game. The whole NES game is here on the small screen, which is impressive. However, compromises in the interface and gameplay had to be made which make it a real bother to play. Pulling up the Verbs menu takes up the entire screen, obscuring what’s going on in the background. Furthermore, the default overhead view is zoomed in a bit so you have less of a view on oncoming enemies. Large melee battles turned into an abstract, janky pixelated mess as the Game Boy’s hardware struggles to keep up with the action. It’s a faithful adaptation, but the NES version is the preferred version. 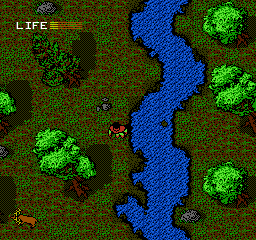 Before this game had the movie license for Robin Hood: Prince of Thieves, it was under development as The Legend of Robin Hood. A prototype ROM of this version of the game is floating around, and it’s quite different from the finished game. For starters, you can play the dueling mode or an archery mode from the title screen. Graphics are
quite bugged out in the archery mode, but the dueling mode is pretty similar to the “Street Fighter” style duels from the finished game. 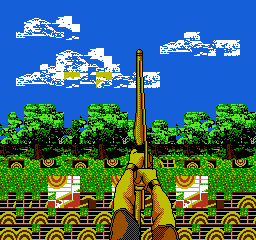 The color palette is less dull than in the main game. Instead of things starting off with Sir Robin of Locksley escaping from a prison as in the film, you are ordered to find three worthy companions. Right off the bat, you’re plopped in the middle of Sherwood Forest. Deadly bears roam the land right next to friendly NPCs. When you talk to individuals, you can question them on specific topics or try to rob them. The status screen looks mostly the same, but there are additional meters for Food and Water. It’s clear the developers were working on giving the game more of an RPG bent than we ended up seeing in the final product. The prototype is worth seeking out for a curious taste of what might have been. 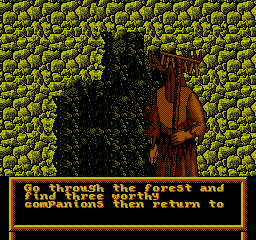 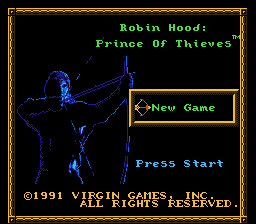 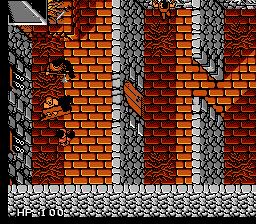