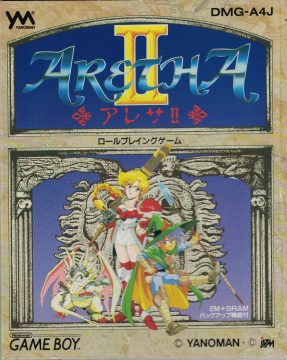 Aretha II takes place one year after the events of the first game. Materia Weathers is celebrating her 18th birthday back in Halo Halo Town at old man Floyd’s house. He lends Materia 30,000 PERA to buy champagne, which is somewhat overdoing it. Materia’s adventure begins when she sets out to invite her former traveling companion and powerful wizard, Doll, to her birthday. Soon after, she uncovers a plot about an evil being named Warwick stealing a powerful artifact called the “Aretha-gi.” Thus, Material and her friends embark to recover this item and save the world.

This sequel was released one year after the first installment in Japan. It improves on a few aspects of the first game, such as game balance, but experiments on several other parts as though to show its difference. Of course, this experimentation becomes a trend with this series.

At first glance, the game looks very similar to its predecessor. The player starts in Halo Halo Town, which has the original layout. The character sprites are almost the exact same. Once outside Halo Halo Town, the player travels through the Elmerda Region, visiting some very familiar sites with the same overworld music from the first game. However, the similarities soon end since this region is the only one from the previous game. The bridge that connects the Elmerda Region to the rest of the world map from the first game is now broken, and from that point is where the world map diverges from the first game.

Yet, multiple improvements hide underneath the exterior. one being that graphics and in-game illustration. The main improvement is Materia Weather’s in-game portrait. The other characters such as Doll, Sybil, and Ben Marxist also have improved portraits during dialogue scenes.

The battle system is still similar to the previous game, which is really similar to Dragon Quest. This time, however, Aretha II adds a “technical attack” system. The chance of landing these are low though. Unfortunately, this game removed weapons that have magical effects when used in battle. Whereas the predecessor had the “Mahar sword” and the “Mura Sword” that allowed Material to use some magic, this game has no such option, thus limiting the battle strategy severely.

Another addition to the battle system is the possibility of weapons breaking in battle. Instead of providing the advent of extra challenge or strategy, this feature causes more annoyance and frustration. Every time you attack, there is a possibility of your weapon breaking. That means a very powerful weapon that was seldom used can break. While the player can repair broken weapons with an item called “cult jam”, this random feature can easily drain the player’s money early on in the game.

For a Game Boy game, the exploration in this game rivals the console RPGs at the time. The world map is very large, and the dungeons are plentiful and long, if not extremely repetitive and bland. One interesting thing is that the first two towns in this game have the traditional top-down view reminiscent of Dragon Quest. Yet, the rest of the villages throughout the game have a 2D side-scroller view, similar to Zelda II: The Adventure’s of Link. This new gimmick actually makes the town exploration more confusing. Several of the dungeons even try to look different by having an isometric top-down view. Yet, other dungeons follow the typical Dragon Quest formula, so it was if the developers were trying to make this game different than the other RPGs, but were not fully committed in their approach.

Nevertheless, this sequel was well-received in Japan at the time. Thankfully, the story and the character interactions are the high points of the game. Fans of the first game get to see how Material, Doll, and Sybil move along. Consumers at the time got a bang for their buck with the game’s length, as it took many hours to complete, albeit most of that time will be spent grinding and traversing through the long, maze-like dungeons. And finally, the developers decided to include an actual final boss encounter with Howard in this one.