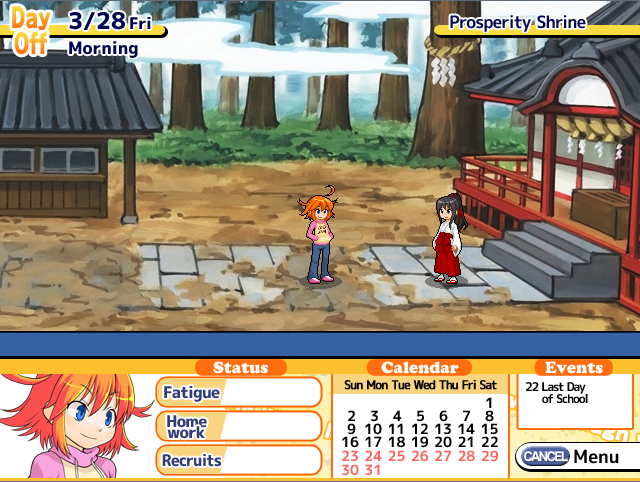 The rise of Steam has lead to a lot of obscure Japanese games finding new audiences in the west. While Recettear is the most notable name among these, another that tends to pop up in conversation is Cherry Tree High Comedy Club!. It’s a sort of adventure game/visual novel that’s modest in scope, but charming in its simplicity. It’s also about subject matter not normally explored in games at all; stand-up comedy. Well, sort of. The game uses that as a jumping off point for its real themes, resulting in a game oozing with personality. It’s also a great example of how different comedic sensibilities between western and eastern tastes are.

The story starts at the beginning of Japanese spring break, as Mairu Hibisu returns to town and her high school, fresh off some unseen adventure. She wants to resurrect the school’s old comedy club, which gave birth to a popular comedic duo many years ago, but her rich rival Chitose has other plans. Now a member of the student council, she’s not willing to let Mairu bypass the rules to establish a club, stating that she has until the end of April to gather together three more members besides herself and her best friend Hoemi, or else the club won’t be officially established or funded by the school. So, the goal now is to scout out possible club members across town, then convince them to join. The possible members are… 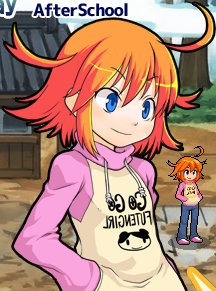 The main character and the one you control. She’s an adventurous teller of tall tales and dreams of being apart of a famous comedic duo. To accomplish that, she wants to resurrect the Cherry Tree High Comedy Club. She’s also the picture of irresponsibility and procrastination when it comes to school work. 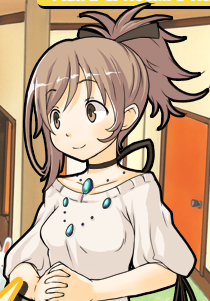 Mairu’s best friend since childhood. She’s also her roommate at the dorm and the club’s second official member (even if she didn’t really get a say in that). She’s Mairu’s opposite; composed, responsible, and popular with the guys in school. Mairu has a habit of showing her other side, though, making her a great straight man. 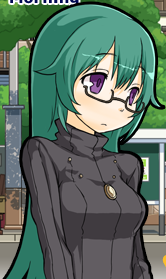 A new member of Mairu’s dorm. She lives with her dog and is incredibly shy, preferring to have her space and not sure how to act in social situations. She becomes Mairu’s first target for recruitment. 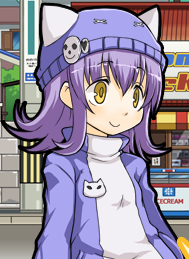 The daughter of the local candy shop owner and a friend of Mairu. She’s just starting high school and expresses interest in joining Mairu’s club, despite not really knowing what its aims are. She’s energetic and obsessed with looking more mature. 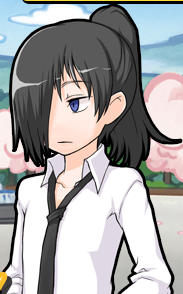 A quiet guy who also happens to be the son of a famous comedian. He has some issues with his father and denies being interested in comedy, despite showing that he is far more knowledgeable on the subject than would be expected. Mairu wants to bring him out of his shell. 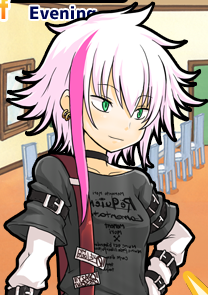 Another old friend of Mairu. She’s a punk rocker who works a lot of part time jobs and has a bad habit of missing school because of it though she’s far from a trouble maker. She has a short temper around Mairu, but is perfectly nice otherwise. She and Mairu share common ground with their focus on their dreams. 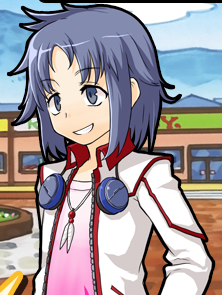 A sort of stalker who keeps tabs on every girl at school. Mairu finds him spying on Hoemi and Yoriko, then realizes that he could be a talented manger. His note taking isn’t just for finding a girlfriend, but for finding people who have a chance of being future successes. He’s conniving but well spoken. 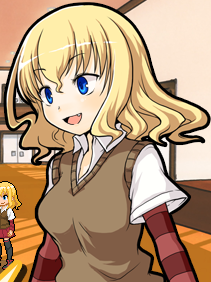 The daughter of the owner of a new museum in town and a Canadian exchange student. Mairu first meets her at the opening of the museum and becomes friends with her once school starts. She’s the last possible recruit to meet. She speaks in broken sentences and is obsessed with anime and Japanese mythology.

Like many low budget Japanese games brought over to the west, Cherry Tree High suffered some translation problems on first release. As usual for Capcom (who helped publish it), the game was originally released in the vain of Phoenix Wright. Japanese words, names, and concepts were brushed aside and called by American names, even when it’s obvious that the game doesn’t take place in America. There’s a Shinto shrine with a shrine priestess and a man who lives at a Japanese mansion in a kimono, it couldn’t possibly be anywhere else than Japan. Even the names of the characters were different, such as Mairu being called “Miley.” 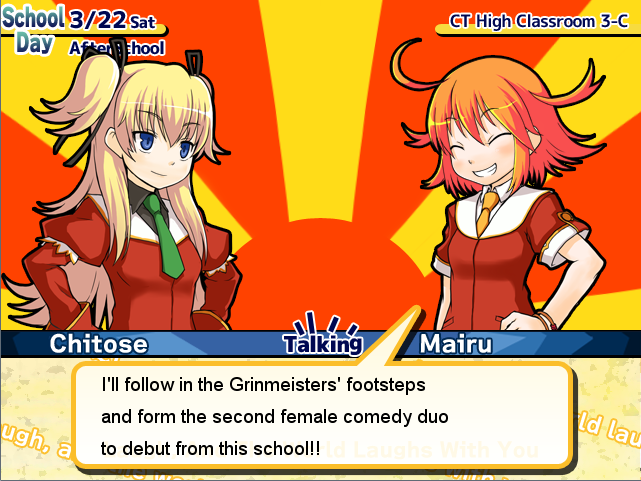 After enough complaints, the translation was fixed to use proper Japanese terminology, causing several of the cultural jokes to suddenly make sense. Playing the game in Steam allows you to switch between the proper localization and the westernized version whenever you start back up, an admirable attempt to please those who liked the original translation regardless. However, a few lines here and there still read as the westernized version while playing the proper translation, such as Hoemi calling Mairu “Miley” when you talk to her in the dorm room. Thankfully, these moments are only in basic dialog when you start talking with someone.

The game is primarily based on time management. You have a little over a month to attract at least three more members to your club, and every day is divided into three segments. Days off have morning, afternoon and evening segments, while school days replace morning and afternoon with lunch break and after school. The main difference is that you are restricted to the school during lunch break, limiting your possible actions. Your activities are meant to grow connections with your six possible recruits, gain money through odd jobs, and increase your repertoire. 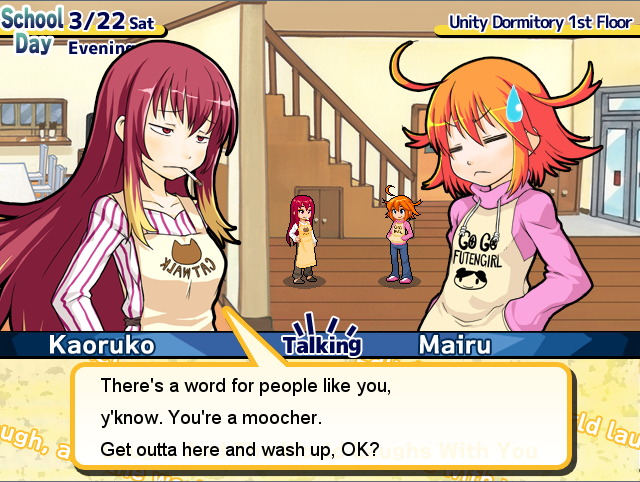 Repertoire is your overall knowledge on various subjects, and the key to recruiting. Every character has their own likes and dislikes, so the goal is to pick out the right topic they’ll respond to most, while also making sure your topic level is high enough to gain a lot of favor. Your knowledge on each subject is ranked zero to five, as are friendship levels. Once you hit a friendship level of five for a recruit, they become a member of the club. Each level up also includes a short scene where you learn more about the characters, what makes them tick, and their motivations. It’s very similar to Persona 3 and 4’s social link system in this regard… and so is the presentation, for that matter. The music is simple and cheesy, but the menus take heavily from Atlus’ design book, even down to the use of yellows and oranges Persona 4 based itself around.

The game also has a similar feel to those social link sequences. The stakes are minor, but every character has a bit more to them that make them feel a bit more human. Yoriko’s social anxieties, Shinnosuke’s father issues, Haru’s daily struggles and more all help give otherwise clichéd characters a bit of depth, with Yoshiki as the only major exception. Even Mairu has a bit more to her, though it rarely comes up. This helps give the game a comfortable mood, little in the way of stakes, but still engaging enough to want to see these characters grow. 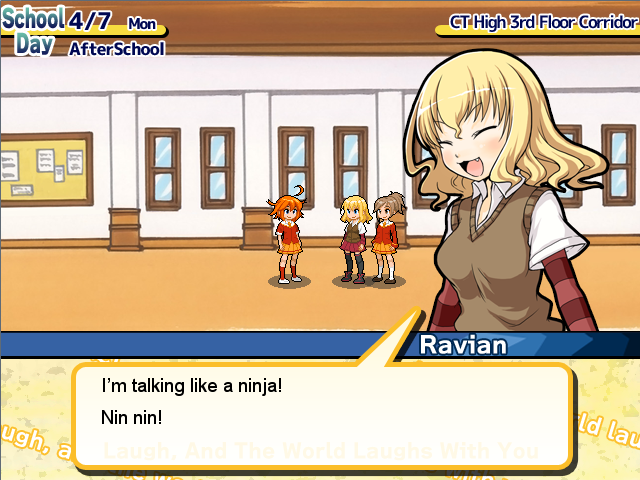 Even activities are similar to the Persona series. You have to choose between money, relationship building, and school work, with a fatigue bar mixed in forcing you to watch your health. Money is necessary to take part in activities that improve your repertoire significantly, while you can be penalized by not keeping up with your school work. You have to find a proper balance and make the most out of your time to recruit all six recruits, which you’ll want to do to unlock the best ending. The game does offer new game+, though, so you can carry over your built up repertoire and aim for the best ending once more.

Cherry Tree High Comedy Club! managed to scratch an itch no other game released westward even managed to quite reach. Persona 3 and 4 became cult hits in the west, and people constantly praised the visual novel elements as part of why they gained so much love. Cherry Tree High took the formula those games set out and focused on the fans of social links, creating a simple, relaxing game that didn’t demand the world from the player. It was one you could lose yourself in and just enjoy. A live sim that didn’t try to be a sim, but just a slice of life with a nice message about chasing your dreams and making the world a bit nicer than you found it. Sometimes, we don’t need something complicated or challenging. Sometimes, we just need to enjoy ourselves, and this game took that to heart.