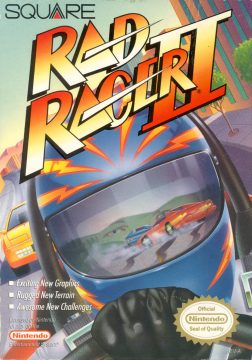 With the first game garnering majority of its half-million sales in North America, its sequel was developed and sold exclusively in that market. What was released isn’t so much of a continuation than it is a retread with a few additions and tweaks that are questionable at the very least. 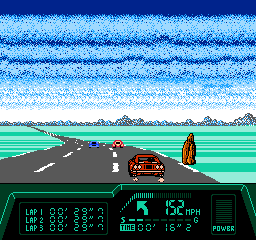 Gebelli’s coding expertise is still in use with some heavy improvements in the background detail. The scenic vistas are far grander in scope with more planes of fake parallax thrown in, though the bars of colors for the ground can come off more distracting. Most of the stages themselves are re-dos of the same themes are the first game, giving a feeling of déjà vu. The new sunset stage, with its choice of violet and orange, is a standout. The music falters again, downgrading from 3 songs to only 2 with no ability to switch on the fly during a level. The song “Gum Ball Crash” sounds grandiose like the tune of an action hop’n’bop platformer, while “Coast to Coast” gives more of an RPG bonus mode or fancy laid back flight. As a humorous gesture, the no music option is called “Sing Yourself”, and is the only means of hearing the car noises and hums in-game, curiously enough.

Things take more cautious turn in the changes to the actual driving. The loss of playing with 3D or with an F-1 race car isn’t a huge deal, but what happened under the hood of the red Ferrari is concerning. The pickup has been dropped significantly, leading to terribly slow acceleration. This change is to give a reason to use the Power meter to get a boosted launch from zero to vroom in seconds, but the actual implementation is hard to use, requiring a buildup with 2 buttons, then hitting the gas and hoping you down careen into anything. The car doesn’t go flying in the air from crashes, but the spin-outs can be just as bad if not worse with that horrible lack of speed at startup with one halt costing an entire run. Turning is also “driftier” in comparison. This lack of tightness can assist with smaller banks on the road, leaving braking only for the sharper turns on the track. The other cars are far more obnoxious. While there’s more variety in designs for the other contenders for lanes, the added graphical detail leads to sprite flickering as they approach. The new physics also leads to the player being pinballed between bumpers on a regular basis. The last levels also throw in more aggressive cars than cut you off to keep you from passing. These alterations lead to a more frustrating experience than the first game. 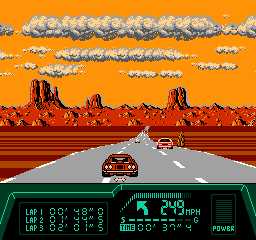 Rad Racer II is a sequel with small steps forward that are marred with new flaws thrown in. The 3-year gap between releases is too vast of a time for what little was improved to begin with. The title comes off a bit rushed to hit store shelves before polishing up the debut of the first Final Fantasy to North America, which would overshadow all previous Square games on the system and leave this “rad” racing game in the dust.

The legacy of Rad Racer is more of a timepiece of the advancement of console racers of the era. It was ahead of many of its competitors on a technical level, and was a joy to behold when the NES was at the top of its game. Square would not create another racer until Racing Lagoon and Driving Emotion Type-S a decade later. In the meantime, the first Rad Racer had the luxury of being showcased in the naked advertisement film The Wizard. The rival and 80s cool kid poster child Lucas in the movie straps on a Power Glove and proceeds to effortlessly blaze through the first stage of the game like he was making a commercial for both products before giving his iconic line about the Glove: “It’s so bad”. 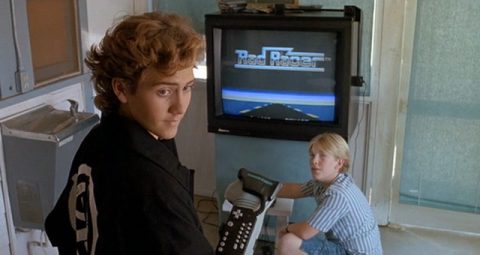 https://www.youtube.com/watch?v=AacoxHFYvZw – The Power Glove scene in The Wizard