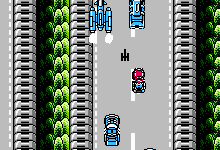 The original 1983 arcade Spy Hunter was a James Bond homage that thrilled players with top-down vertically-scrolling driving and shooting. The game placed you in control of a car that could shoot bullets, and the goal was to destroy any enemy vehicles that get in your way, protect pedestrian motorists, and rack up as many points as possible. This is pretty standard stuff today, but at the time, the mix of high speed and the ability to shoot while driving made Spy Hunter a huge success.

The Spy Hunter NES port emerged in the latter half of 1987 and the product was similar to the arcade. Too similar, in fact. Driving fast and shooting other vehicles for points was gangbusters in ’83, but removed from the “cheap thrills for a couple quarters” arcade atmosphere, the home port lacked any sort of progression to keep you interested. No levels, no bosses, nothing other than driving and shooting forever. It’s this dearth of objectives beyond point collecting that makes NES Spy Hunter feel, well, completely pointless. 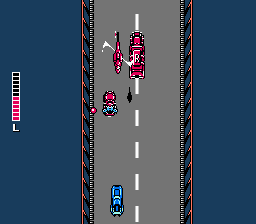 After an unsuccessful arcade-only sequel, the Spy Hunter series remained largely dormant until Sunsoft repurposed their Famicom racing shoot-em-up Battle Formula into Super Spy Hunter for the NES in 1992. While not an official sequel (Sunsoft ported the original Spy Hunter and obtained the rights to use the “Spy Hunter” name from Bally Midway), the game plays like an over-the-top, beefed-up version of the original.

Upon first glance, Spy Hunter and Super Spy Hunter look incredibly similar. In both games, you control an armed supercar at high speeds across different types of terrain. Your enemies are other vehicles and must be blown apart with extreme prejudice. This is where the similarities end, though. Spy Hunter for the NES is a ramshackle arcade port that has little reason to exist. Super Spy Hunter is an intense racing/shoot-em-up hybrid that propels the player forward with aggressive action and over-the-top setpieces.

The story takes place in the year 2525 with the United Nations under attack by unknown terrorists. The C.I.A. has sent their best agents to try to overthrow the terrorists, but all of them have gone missing or were killed in action. Finally, after even rookie agents have been sent out to their doom, the C.I.A. looks to you, Super Spy Hunter, to save the world from complete destruction. The plot has no bearing within the events of the game and was likely added just for its Western release. 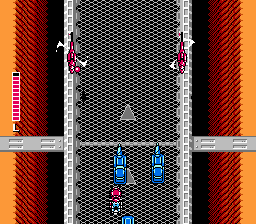 Though the game’s difficulty ramps up considerably in the later stages, Super Spy Hunter is, at first, surprisingly considerate of the player. The first stage, for example, is a freeway with insane curves, chunks missing, and abrupt turns. While these environment changes are initially intimidating, the game allows you to slow down and speed up manually. This enables you to process the onscreen shenanigans. Blinking turn signals, along with the occasional “Jump!” and “Stop!” proclamations also appear throughout the game to inform you of what action you’re supposed to take. Compared to other devious shoot-em-ups of the era, Super Spy Hunter is generous with its guiding of the player.

As with any shoot-em-up, power-ups are your friends. In Super Spy Hunter, they come in the form of red and blue vehicles. Both types of vehicles will cycle through different letters. Once the vehicle is destroyed, it will throw out the letter icon last displayed. Powerups from red vehicles mostly provide mods for your primary cannons, such as automatic directional control instead of manual, extra power, rapid shooting, and extra life for your measly life bar. Blue vehicles provide 1-Ups and secondary weapons, like screen-clearing bombs, oil slicks, tire slashers that remove cars from either side of you, and a detachable cannon attack. Once you’ve used the blue attack, they disappear until you destroy another blue vehicle, but your red attacks stay with you until you die.

Despite the game taking place in the far-off year 2525, the enemy vehicles don’t have interesting designs. They range from cars that try to bump you into the side, cars with drills on their front, trucks that unleash flammable barrels into the air, shooting helicopters, and semi-trucks that only exist to slow you down, among others.

The enemies are certainly generic, but the six environments are captivating. The aforementioned first stage is “Aquapolis” and places you atop a nearly submerged freeway. If you don’t drive on the visible portions, your car will sink into the briny deep below. Stage two is the Desert of Doom and takes you through large stretches of quicksand. Get sucked into a hole and a large chunk of life will be removed. The Hazardous Detour is next, a narrow stretch of road that branches, twists, and turns with little warning. Failure to take the correct branching path results in driving the same paths until you rectify your mistake. 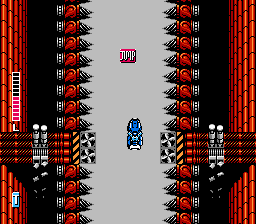 Stage 4, The Collapsible Canyon, is terrifying, with a see-through steel mesh/glass floor standing between you and the bottomless canyon below. Halfway through the level, you’ll jump off ramps and soar into the sky for a minute at a time, blasting helicopters, before the road finally reemerges. The Amphibious/Aerial Assault takes you from boat to car to plane in the ultimate “oh crap, please don’t die” level. There are no power-ups in the boat section and plenty of water bombs that kill you in one hit. The Aerial Assault is the longest section of the game, an endurance run with planes that spew out limitless bullets and require hundreds of hits to be destroyed. The final stage is a Weapons Factory that incorporates previous bosses, spiked drills for walls, lightning that prevents you from seeing the full stage at any given time, and a series of unnerving precise jumps.

The boss designs keep with the game’s vehicles-only motif. There are: armored tanks that break apart to reveal additional sections to shoot; an enormous one-hit-kill laser cannon that’s actually five laser cannons in one; a fiesty eyeball surrounded by two laser cannons; a Turbo-Prop Space Cruiser, which shoots eight missiles at a time, expels hundreds of bullets, and has two swinging chains that would look more appropriate in a Mario game. There are also three final bosses: two enhanced versions of earlier bosses, and a Super Missile. The Super Missile, once broken open by your blasts, reveals an eye that is surrounded by a cloud of destroyable blue balls. Shoot the eye enough and the blue balls turn to stronger red balls, some of which can’t be shot.

The ending is no more than a quick screenshot of your car driving away to some unknown vista with the pathetic words “You completed all missions.” There’s not even an exclamation mark on the end of that sentence to congratulate you for your accomplishments. Super Spy Hunter‘s lackluster farewell doesn’t take away from the achievement of beating the game, but it’s hard not to feel a bit slighted by the lack of effort put into the game’s final moments. 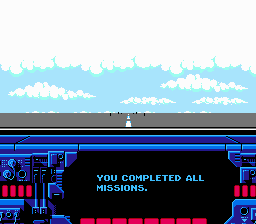 The Spy Hunter series would take a prolonged sabbatical after Super Spy Hunter until Paradigm Entertainment and Midway Games resurrected the name for a 2001 3D remake SpyHunter for the PS2, Xbox, and the Gamecube. A sequel to this remake followed, as did a bizarre spin-off called Spy Hunter: Nowhere to Run in 2006. The latter was intended to be a tie-in for a “Spy Hunter” film starring Dwayne Johnson, but the film remains in development hell. The series was last seen as Spy Hunter, yet another reboot released for the 3DS and Vita in 2012.

Beyond its initial release, Battle Formula was included on the Memorial Series Sunsoft Vol. 6 disc for the PlayStation, which also includes Gimmick!. It plays well, but the music, like most of the other NES games on this collection, sounds a bit off. This version was released on the Japanese PSN for play on the PS3, PSP and Vita, but input lag issues really mess up the PS3 version, since it’s an emulation of an emulation, displayed on an HDTV.