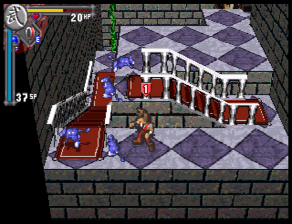 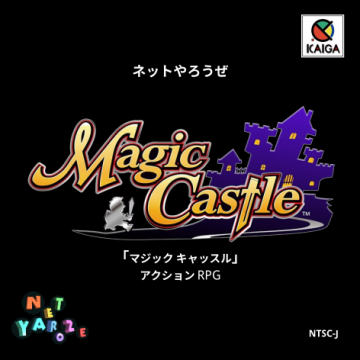 The year is 1997. Keiichi Matsunami and Hiroyuki Itoh have left their job in order to make their own job, by renting the place of a family member, a few computers, a Net Yaroze. With the help of two other individuals, they formed KAIGA in order to make Magic Castle.

The Net Yaroze was a development kit for the original PlayStation that launched in 1996 in Japan, and 1997 in other countries. Costing $750 USD (around $1250 accounting for inflation), hobbyists could use it along with a computer in order to develop their own games without needing to get expensive licenses and development kits. Besides the console, it included two controllers, a key disc, and an access card in order to boot games from a computer as well as a cable for the link, a CD-ROM with development tools, and manuals. You’d also get access to a forum made for Net Yaroze owners in order to collaborate, although they were region restricted despite the console itself being region free. Other restrictions were the lack of support for multitap, and because you couldn’t use burnt CDs, developers only had the console’s 2 MB of RAM at their disposal. 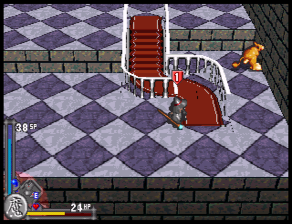 The team wanted to make their own game, and because they were running on their savings and due to the cost of normal development kits, they decided to use the Net Yaroze in order to make a prototype and pitch it to publishing companies in order to get funding. After around eight months, they had completed the concept for Magic Castle and made a VHS tape featuring the game to send to several companies.

Sony, being the company behind Net Yaroze itself, was one of the contacted companies, and they showed interest in their project, so the team scheduled a meeting with Sony to explain the project in detail. After several days, they received an offer from Sony to have them work in one of their projects, an offer they rejected because they wanted to implement their own ideas into a game.

Another company – that they decided to not name – told them that they’d use ten people to judge their game, the game would be made if any of them approved it. After sending the development environment for judges to play, they received the results: three judges wanted it made. There were several meetings and one big problem: the company would finance the development, but the team would have to find the development staff themselves. Because they didn’t manage to recruit more people for the project, it up being cancelled. Having exhausted most of their funds, the team disbanded, and Magic Castle was canceled. 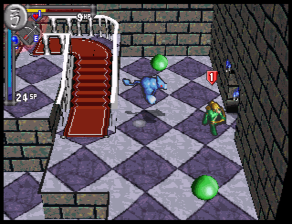 It wasn’t until December 2020 when Itoh found a floppy disk with the source code and assets, and decided to release the game as it was in 1998. He also released  the promotional video made to promote the game, a manual, and a newer build with options, more languages and a bit of story for context. Although the option for the newer build is called Full Game, a few more versions were developed after for balancing, and it’s possible more will come out in the future.

When you start up Magic Castle, you’ll find a special menu that lets you choose between playing the original beta, the “Full Game”, or watching the video they used to pitch the game to publishers. While the beta is Japanese only, the full game also has English and a few other languages, although knowing Japanese isn’t required to beat the game. When you select the beta, you’re thrown straight into the experience but in the Full Game you’ll see a scrolling text explaining that an evil lord turned the riches had stolen into monsters, and that four raiders joined together in order to defeat him.

Starting a new game in the Full Game will let you select the number of players, and between four classes: knight, wizard, archer, and fighter, while the beta automatically starts with the knight. The knight can block if he has a shield, the wizard can create flames, and she can fly with an upgraded rod, the fighter can grab and throw enemies, and the archer can fire arrows in front of her and vertically, as well as being able to dash in the air with the right equipment. Their abilities and the difference in their initial stats does enough to differentiate playthroughs.

Although you can technically have four players, there’s no multitap support, so if you add four characters, the first and the third will be controlled by player one, while the second and fourth will be controlled by player two. Multiplayer is cooperative, but each player is scored separately based on the money they pick up throughout to determine the winner. The game is an action-RPG where you can move around, jump, and attack, and depending on the class, you might be able to block attacks with the necessary equipment, or have a secondary attack that may or may not use mana. 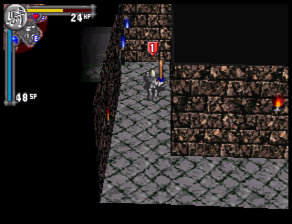 You start in the first floor of the castle – each floor is made up of 3D rooms designed after either a dungeon or a medieval-looking castle. The song that plays depends on how the current floor looks, and there are tiny variations of the song depending on the kind of room – for example, dimly lit rooms have a more tranquil version of the song. The layout of each floor and rooms changes in each playthrough. While the rooms and chests are 3D, the characters, enemies, and items are pre-rendered 2D sprites. While the game’s presentation is definitely on the simple side, basically being an indie project, it also has nice touches like rooms with different illumination, character sprites changing color according to equipment, and the shadow of characters not being a simple circle.

The objective of each floor is to find a key to the next floor. There’s no way to backtrack, and your ultimate objective is to find and defeat the evil lord. He doesn’t have a unique sprite, probably due to the fact that the game wasn’t entirely completed – instead, h,e looks like one of the knight enemies that can appear throughout the game. You’ll know you defeated him because the game will end as a result. He only spawns from floor 20 onwards, so that runs aren’t that short. Going through a floor you may find ivy to climb to go to a different room, and you may find traps that’ll toss you around and stun you temporarily. You’ll also find a number of enemies, which in the full game hide the key to the next floor, but in the beta the only reason to fight them is to collect experience and the coins they drop (sometimes they might drop potions instead). The coins can be used in the full game to obtain items at wish fountains, and experience will make your character level up and increase their stats. If you are playing in hard difficulty, the enemies will respawn, and to prevent grinding they’ll only provide 1 EXP when defeated again.

The game has equipment to increase offense and defense, grant extra attacks, increase jumping ability, and rings that use mana in order to add magic to your attacks or automatically heal you. There are also potions that you use on demand to recover your HP or mana, and scrolls to perform magic attacks. The Full Game adds NPCs, who will request various items – provide it to them and you may give you hints or trade items. Enemies include a variety of typical RPG monsters like rats, slimes, bats, skeletons, golems, and knights, all in different color and size variations. Additionally, outside the beta, it was made so that enemies would scale in power the deeper you go into the castle, so you have to be more careful with how you use our consumable items. 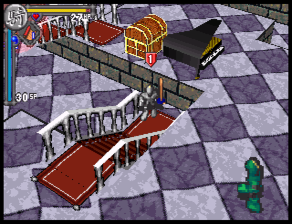 While there’s a novelty factor with being able to play a previously cancelled game, the game has pacing issues due to the characters’ slow movement – specially the wizard’s initial speed – which makes it feel like a chore to trod through the castle, especially when advancing as fast as you will basically guarantee you’ll be too under powered to take on the final boss. It’s hard to judge it too harshly since the developers may have added more elements into the final game, but in its current state, it likely wouldn’t stack up against other rogue-likes of the era from more established developers like Torneko: The Last Hope or Azure Dreams.