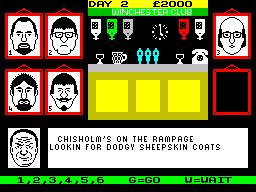 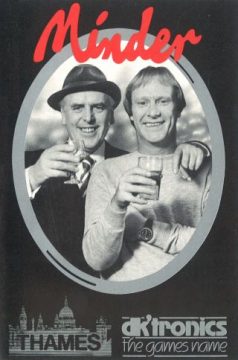 Minder was a comedy-drama produced by Thames TV that starred Dennis Waterman and George Cole: it centered around Terry McCann (Waterman), a good-natured former boxer ex-convict who does various odd jobs for the opportunistic, often legally dubious dealer Arthur Daley (Cole). Though it was slow to gain traction, Minder eventually became one of Thames’ most highly regarded productions, running from 1979 to 1994 as Terry and Arthur got into one unexpectedly complicated situation after another.

It’s not surprising then, considering how anything vaguely successful got a licensed home computer game at the time (e.g. Action Biker With Clumsy Colin, which was based the mascot for KP Skips of all things), that Minder got a game at the height of its popularity in 1985. It’s easy to assume that the game would just take the premise and shove it into any old genre, regardless of how well it fit. But programmer Don Priestly paid attention to the finer details of the show, and particularly how it evolved. Earlier series mainly focused on Terry and the jobs he took on (usually as a bodyguard or a ‘minder’, i.e. to mind or keep an eye on someone), since the show was intended as a Dennis Waterman vehicle. However, the chemistry between Waterman and Cole led later episodes to give greater emphasis on Arthur’s attempted deals and schemes. 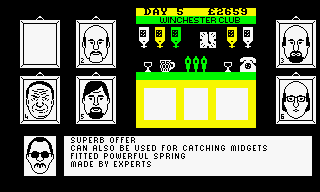 The game capitalizes on this by putting you in the shoes of Arthur Daley, giving you £2000 and two weeks to make as much money as possible by buying and selling goods at various prices. You do this by approaching dealers, or being approached by dealers, and negotiating prices and the number of items you’ll take or sell. Once you’ve come to an agreement, you can find Terry and ask him to either deliver or collect the goods (which you must do within a set amount of days). It seems simple enough, but there’s a lot more going on that can lead to plenty of complications.

Time plays a big factor in your activities, since you’ll need to find people or go to certain locations at the right time. You have from 9 AM until 2 AM, and every action takes up one in-game hour – choosing to wait around, making conversation (whether it’s a long haggling session or a brief drunken insult), or driving between the game’s locations. These include retail dealerships, who each sell different goods related to their name (for example, Watt deals with electrical goods and Carr sells motoring products), and Terry’s flat, where you can normally find Terry in the morning if necessary.

Your most frequent haunt will be the Winchester Club, where you can haggle deals for various goods, ask Terry for help, or even enjoy a nice drink on the slate. However, things get complicated because you can be suddenly approached by random strangers, or dealers hawking unwanted garbage onto you. If you’re especially unlucky, you’ll be pestered by Detective Sergeant “Cheerful Charlie” Chisholm, who’s always on the lookout for stolen goods – which will likely be in your stock! 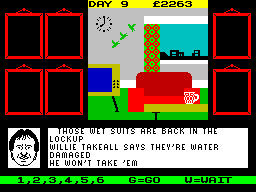 Yes, there’s a chance that your goods (and this includes what you start the game with) have been nicked, or even damaged. You’ll only get in trouble with Chisholm if he catches you at the lock-up, which you unfortunately need to visit to see what you need to collect or deliver. If you don’t want to spend the next few days at the police station and a few hundred pounds, you can ask Terry to dump whatever’s dodgy, though you can still try to sell them off to an unsuspecting dealer. That said, don’t be surprised if you get far less cash than agreed, and make sure to either ask Terry to mind you or avoid talking to that dealer in the Winchester, because they’ll often land you in hospital for a few days with a swift punch.

There’s a lot to juggle in trying to make some cash, enough that it can be a bit too imposing. Keeping numbers in your head when making deals and remembering what to deliver and collect can be tricky enough, without being interrupted by strangers, arrested or beaten up and causing you to miss your chance. It can also be tough getting used to the game’s conversation system. It works remarkably well most of the time, offering plenty of ways to say something (including slang for money; ‘sovs’, ‘a pony’, etc.), and characters always reply in such a way that you never get truly stuck in a loop. But you’ll sometimes need to use a specific word to make a deal – even if you use a fitting word, the context might derail the conversation or cause the other person to suddenly leave.

It’s definitely the kind of game where you’ll need a manual or a guide on hand to help you through the first couple of playthroughs as you get to grips with the mechanics, though it’s actually quite generous in places. You’ll always have something in your inventory at the start to focus on selling, characters will always ask you to clarify what you want to sell or buy, and you have to be very reckless to get punched out or arrested. Playthroughs are quite short, and you can always skip to the next day by going home, allowing you to figure things out without trudging through long sessions. 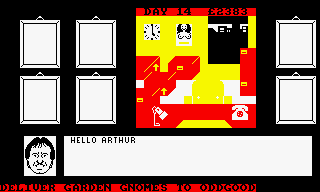 What makes Minder really work as an adaptation of the source material is that all the complications in making money, even some of the irritating mechanical obstructions, serve to emulate the TV series in a very particular way. Trying to make deals with hilariously hooky goods, avoiding the wrath of Chisholm or vengeful dealers, best-laid plans suddenly going awry due to unexpected circumstances – these happen frequently in the show, and that Don Priestly managed to put you in those situations and get you thinking like Arthur Daley just through the mechanics is an impressive achievement worth celebrating. While Minder can be potentially boring or confusing, it’s definitely worth looking into for fans of the series and fans of unusual management games.

The graphics strike a nice balance of simple and effective. The backgrounds are fairly basic, but the character portraits is where the visuals shine. The portraits for characters from the show such as Terry, Dave the bartender, and Chisholm do an admirable job caricaturing their actors, while in-game NPCs have a wide variety of expressive, memorable faces. Even better, the game has an algorithm randomizing the types of faces you’ll encounter on each playthrough, so you’ll always find someone fairly distinct looking.

There isn’t much sound design, apart from a rendition of the show’s famously catchy theme tune I Could Be So Good For You (sung by Dennis Waterman himself!) that plays during the driving screen between locations. The Spectrum’s arrangement is painfully noisy, with a sine wave that’s too harsh to stand for more than a few seconds. The CPC and MSX arrangements are considerably better thanks to having more complex sound hardware, though the MSX version plays the theme tune throughout the entire game – when a normal session lasts around an hour, this gets annoying very quickly.

On the subject of platform differences, all three versions play identically. The only noticeable distinction is the speed of responsiveness: the Spectrum responds to your typing the best, the CPC version is a little bit slower but still good, and the MSX port is very slow in responding to your inputs. In fact, it won’t register some inputs if you type fast, making the game a tedious crawl. Interestingly, the instruction manual details loading instructions for the Commodore 64 and Memotech MTX. However, the C64 version was seemingly never released (though it received a review from Commodore User), while Minder can only be played on the MTX by using the Speculator add-on to play Spectrum games.

A basic guide to the Minder video game, along with tips, articles about the game and an online emulator to play the Spectrum version – https://www.minder.org/mindplay/mindgame.htm

An interview with Don Priestly in 1998, where Minder is mentioned – http://www.worldofspectrum.org/interviews/PriestleyDon.htm

A page on the unreleased C64 conversion of Minder, including a review from the magazine – https://www.gamesthatwerent.com/gtw64/minder/ 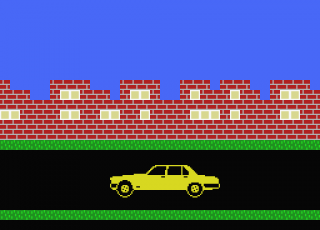 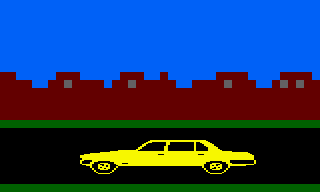 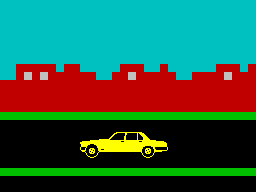 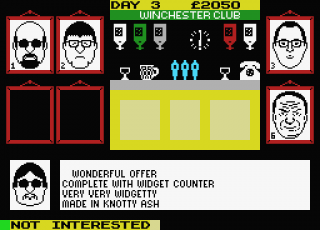 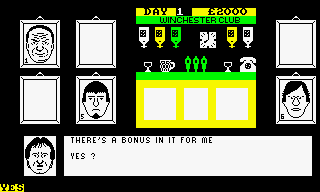 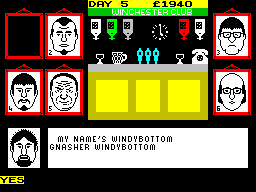 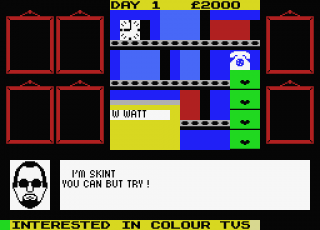 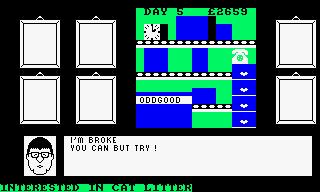 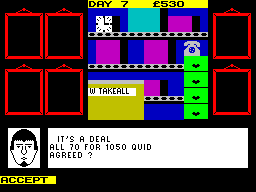