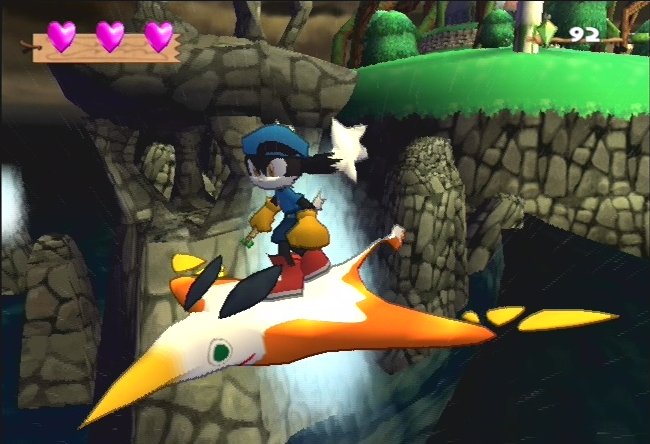 Klonoa’s PS2 outing introduces fully polygonal characters and gorgeous cel shaded graphics. The original game looked pretty decent on the PSOne, but some of the landscapes are incredible – Namco has crafted a world unlike any other, and Klonoa 2 is worth playing just to explore the scenery. Many of the locales are similar – wooded areas, caves, and so forth – but you also get to explore European style cities, carnivals and other beautiful locations. The PS2 also allows for even more dynamic camera effects – cannons will propel Klonoa through the sky, and the viewpoint tilts when Klonoa approaches a ledge, giving a sense of vertigo unheard of in most side scrollers. You’ll also find rockets that send Klonoa hurtling thousands of feet in the sky, giving a huge view of the whole level as you fall harmlessly back towards the earth. In respects to the 2.5D viewpoint, the original PlayStation version was a well executed experiment, while the sequel perfects it. 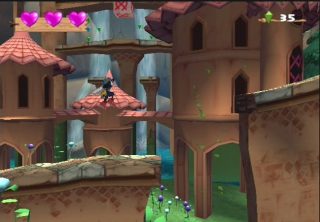 The story begins with Klonoa, unconscious and unaware of his surroundings, waking up in the strange land of Lunatea. He is discovered by a priestess-in-training Lolo and her dog Popka, who cryptically dub him the “Dream Traveler”, then request his help to save their land from the usual evil by ringing various bells in their world. During their travels, they’ll become entangled with the pirates Leorina and her sidekick, the dual-sided feline Tat. 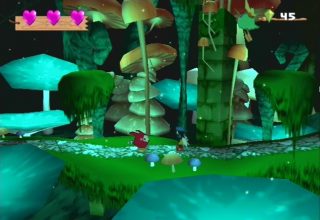 Klonoa 2 is still pretty short, but you now only take three hits before losing a life, so it’s not quite as easy. An overworld map also lets you choose the order in which you can tackle certain levels. Other than a handful of 3D surfing stages – which are a bit on the lame side – the gameplay is pretty much the same as the original. The music is much the same vein as its predecessor, but there’s a whole vocal song with lyrics in that crazy language they speak over in Klonoa world.