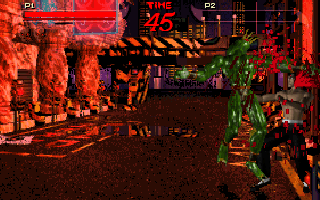 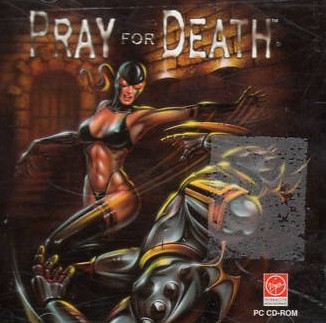 The PC was never really known for its selection of fighting games, and there’s a few reasons for that. For one thing, keyboards tend to not work out so well when you’re playing a fighter, even though there were always alternatives like the Gravis Gamepad. While we got quite a few Street Fighter II ports and the first four MKs, most PC developers had to rely on making their own fighting games. This tended to be a bit of a crapshoot, as Pray for Death shows nicely.

Pray for Death was made by a small Italian company called Lightshock Software, who had previously made another fighting game called Fightin’ Spirit for the Amiga. Fightin’ Spirit was a colorful, good-looking game with a very SNK-style look, that also happened to play pretty well. So it’s a real shame that they suddenly lost every ounce of talent they had while they were working on this game.

As the story goes, all the game’s characters are stuck in Hell, when Death decides to hold a fighting tournament, where the winner will get to come back to life. It doesn’t entirely make sense, seeing how apparently a robot and Chulthu are stuck in Hell, too…it’s never explicitly stated, but the great Elder God probably doesn’t believe in Christian lore, but whatever. The other characters are pretty boring, not counting Cthulhu (seriously, you have to admit that’s kind of awesome) and the big robot. You’ve got your Bruce Lee clone, required by law to be in every fighting game made after the year 1993, Anubis (somehow he ended up in a game worse than War Gods), a knight, a demon, some kind of techno-themed serial killer dominatrix, a viking, and a magician. They’re all lacking in much visual flair or personality, although to Lightshock’s credit, they all have their own unique, if poorly written, pre-fight banter on the VS screen.

When it comes to actually playing the game, what Pray For Death actually DOES is try to rip off Killer Instinct as hard as it possibly can. You’ve got two pre-rendered fighters, standing in front of an FMV background, and most of the fighting is done through strings of auto-combos. Unlike Killer Instinct, PFD manages to screw up everything it ever did. Characters tend to hang in the air for a second after you jump, and the game pauses for about a full second every time you land a hit on somebody. 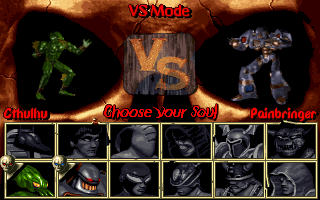 Combos are as easy to do as any of the game’s special moves, and are used by hitting three directions and a button. How long your combo tends to last is entirely dependent on whether you’ve memorized your character’s three combo moves, and getting out of them if you’re tired of watching your guy getting pummeled rests entirely on if you’ve memorized his breaker. Not even the fatalities, one of the few things that redeems one of these sub-par MK style games, are any good, because they all involve your character hitting your opponent, which causes him to shake around a lot, spew blood, and then fall over. At least the “Idiot Moves”, which are basically a cross between Friendship and Fatalities have some amount of creativity. Pantera, the serial killer techno dominatrix creates two giant speakers, which play out so much noise it kills the opponent, I-No style.

So, Pray For Death is definitely not a good fighting game, even on the limited selection. One Must Fall, the Super Street Fighter II Turbo port, even Time Slaughter manages to play better than PFD ever does. It’s an unabashed Killer Instinct ripoff with poor controls, a set of mostly lame characters, and terrible fatalities. On the other hand, however, you can have Cthulhu fight Bruce Lee. And isn’t that kind of sheer unintentional comedy what these Mortal Kombat clones were made for?