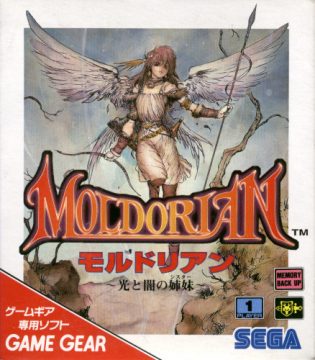 Moldorian, published by Sega in 1994, is one of the best turn-based RPGs on a 8-bit handheld, and one of the only good ones (Defenders of Oasis, also for the Game Gear, is another). “Published” by Sega, because though that’s the only company name that shows up in the game or on the packaging, it was really developed by a company named Rit’s, headed by the late freelance illustrator Kensuke Suzuki. Under his real name and his alias Hiroshi Kajiyama, Suzuki contributed graphics and character designs to most of Camelot’s output, from the classic Shining Force series to Golden Sun and beyond. While Moldorian was never released officially outside of Japan, it received a quality fan-translation in 2019.

Its battle system is notable for being both turn-based and without menus. Essentially, actions are directly mapped to buttons. Each character (and enemy) has their own individual turns, based on their speed stat. When a character’s turn is up, they step forward, and you have a few seconds to enter a command; if you don’t, their turn is wasted. For example, to attack, you’d press Forward on the D-Pad, select a target, and press Button 2 to confirm. To cast a spell, you first press Button 2, then the direction corresponding to one of the four spells you currently have equipped. Items work the same way, but with Button 1. It takes a while to get used to, but it does make for very fast-moving battles, particularly if you set the Battle Speed to High in the Options menu.

This is good in itself, but it also helps offset the high encounter rate, as does the fact that the dungeons are generally compact. In fact, the encounters mostly get annoying when you’re traveling through the oddly oversized overworld, searching for the next town “to the East” of the previous town. There’s a spell to cut down on it later on, which seems to be cumulative – cast it once and it barely does anything, cast it three or four times and monsters will usually leave you alone for a while, unless you’re underleveled for the current area. As with any good old-school RPG, there are also spells and items that let you warp out of dungeons and to any town you’ve previously visited. Like items, all magic is bought, though you only need to buy the basic spell for a character, and you can then upgrade it to a stronger form later on for cheap.

Moldorian is your classic fantasy land. In this world, there are two realms, inhabited by two peoples, the humans and the magi. Long ago, they were one, and all lived in the same kingdom, where everyone could use magic. One day, a pair of twin princes were born, one with magical powers, and one of without; after leaving the kingdom in search of answers, the latter founded his own kingdom in a foreign land, where humans came to live. The two peoples were close, until they weren’t; after 700 years, for reasons unknown, they separated themselves from each other, and have had minimal contact since. This backstory is found in the User Manual, which the fan-translators were kind enough to not only translate, but actually program into the game.

The game starts when a timid youth, Navarre, and his best friend and protector, Miria, head to the forest to retrieve a brooch Miria lost there. In the forest is a cave where monsters are said to live, and Navarre, in an effort to show the village bully that he’s not as wimpy as he seems, explores the cave on his own. As he comes back out, however, Miria is kidnapped. His father, a former castle knight, goes after her kidnapper, but when he doesn’t return, it’s up to him to do the same. With the help of Miria’s older brother, himself an active knight, and others he meets along the way, he goes on an adventures that will eventually take him to the land of the Magi.

The premise is a common one – in particular, there are numerous parallels with Rhys’ adventure in Phantasy Star III, though it plays out quite differently. Where Moldorian stands out is in the little details that give its world more life than is ordinary for RPGs on 8-bit consoles, particularly in terms of the characterization. Not only is Navarre not the genre-typical orphan, he’s got an actual extended family, complete with grandparents and siblings. It’s impressive how little respect he gets from anyone in the beginning: as far as anyone sees it, he’s a weakling and a coward, always hiding behind the braver Miria. Yet his family and the rest of the village folk aren’t portrayed as evil or particularly mean; they love him, they just want him to be better.

Likewise, the NPCs and playable characters you encounter are often related to each other in various ways. Everyone in the village knows each other. The bully was raised by his grandmother, who lives at the other end of town and has a thing for your grandfather. Even the bully isn’t one-dimensional. Much later on, when you run into him halfway across the world, he’s a lot friendlier than before. By then, you’ve both grown, and the former dynamic is gone; you’re a warrior and an adventurer, and he’s become a wizard’s apprentice, having left the village like you did to go look for Miria.

Well, are you, punk?

Being a Game Gear release, it’s also only about half as long as the average console RPG circa-1994, if that. With just 10 hours to fill, the game has no time to get bogged down in filler content, and it moves at a breezy pace.

Graphically, it has towns like old-school Dragon Quest, where houses are seen from overhead minus the roofs, a side-view during battles, sort of like Final Fantasy, but with more realistic proportions, and Shining Force-style character portraits during conversations. The sprites are small and the colors vibrant. If other Game Gear titles like Royal Stone or Defenders of Oasis look like they belong on a 16-bit console, this one looks halfway between the 8-bit and 16-bit generations, like an early SNES remake of a NES game might turn out.

The soundtrack is also one of the better ones on the system. The composer is Hitoshi Sakimoto, who’d go on to work on major games later on, like Ogre Battle and Final Fantasy Tactics and Final Fantasy XII. Unlike the Genesis, the Game Gear has very little in the way of bass and percussion, so it has to rely more on melody, which is something Sakimoto excels at.

Apart from the encounter rate, there are more minor inconveniences. The game will not tell you in any way when you’ve equipped a piece of cursed equipment (though there are very few in the game), and you won’t know for sure until you try to replace it and find that you can’t without first visiting the priest (a curse will slow a character down drastically). Likewise, you won’t know whether a weapon has a special effect until you use it in battle; some of the later weapons have awesome effects like double attacks or spells that trigger at random for extra damage. On the other hand, you can save anywhere, at anytime, which is quite practical.

That aside, Moldorian is still a solid old-school RPG, and as one of only about a dozen games that really live up to the Game Gear’s potential, it’s certainly worth a look.

Outside of this game and Kensuke Suzuki’s freelance work, Rit’s (under their label Gimmick House) were also responsible for the Dragon Master Silk duology of first-person dungeon crawlers, originally released for PC-98 computers and later ported to the Saturn. According to his official twitter account, Suzuki passed away in 2018.