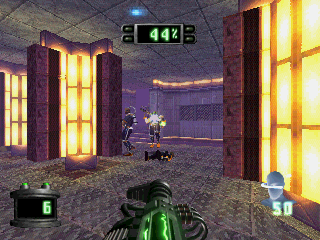 During the mid-90s, fledgling developer Insomniac Games was looking for a debut project to give them the game design experience they currently lacked. Inspired by the ground-breaking DOOM, they decided to create a first-person shooter in that style but with their own spin on the formula. After a couple of years and a change of console from the failing 3DO to the successful PlayStation, they eventually came out with Disruptor: a fairly impressive title that showed off their technical and designing chops, with plenty of challenge to spare.

In the distant future, intergalactic soldiers called LightStormers are infused with psionics that grant them special powers and head out to protect the local cosmos from all manner of evil-doers. One of them is Jack Curtis, a highly capable young man training to follow in the footsteps of his legendary, mysteriously murdered father. If he wants to become a true LightStormer, he’ll have to follow his brother’s advice: “think fast, shoot fast, and kick ass”. (An actual line of dialogue, delivered through one of the game’s live-action cutscenes.) 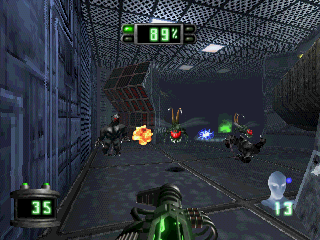 Disruptor plays like most DOOM-inspired shooters of the day, with your goal being to reach the end of the level while blasting whatever comes your way. You start with a basic pistol-turned-machine gun, before you find other weapons that come with specific types of ammo. There’s two styles of laser rifles, A.M. blasters that function as either shotguns or grenade launchers, a lock-on cannon whose blasts follow enemies, and secret weapons that can only be used once but pack a powerful punch.

While there’s an impressive weapon variety, what really makes things interesting is the introduction of psionics. Introduced from the second stage onwards, these are special powers that pull from a set resource of psionic points and can be used in a variety of situations. You can hit enemies up close with Shock, temporarily protect yourself with Shield at a drastic reduction to your speed, take out multiple foes with a projectile Blast, and restore health with Heal. You can also use Drain to siphon enemies’ health into psionic points to collect, which you’ll certainly need since you can’t restore or regenerate your powers otherwise (though killing enemies with a Blast also leaves points behind). 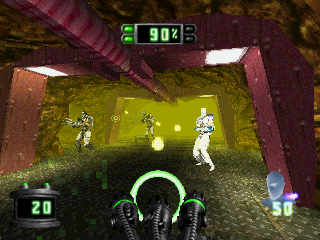 What this results in is a game full of various weapons and powers at your disposal, where they’ll have to be used carefully per situation in order to make it to the end. This can sound potentially overwhelming with how much you have to juggle, but Disruptor does a good job at slowly introducing everything. Each level gives you a new weapon or power, ensuring that there’s always something new around the corner, and backs this up with a different kind of objective or enemy type to contend with. One level will have you shooting enemies and avoiding explosive hostages, while another will have you stumbling through wide open deserts to find a secret temple.

The variety seen throughout is commendable, and helps to flesh out a solid foundation. Although certain aspects of the controls are slightly awkward, like having to hit the shoulder buttons to swap your weapons and psionics, moving and shooting is responsive enough to give you a fighting chance and a good time. Enemies come in all kinds of types and are placed intelligently, requiring different types of weapons, psionics and strategies to overcome. There’s even a handful of secret areas to keep you looking around for much needed health and ammo pick-ups, though there aren’t any bonus stages. 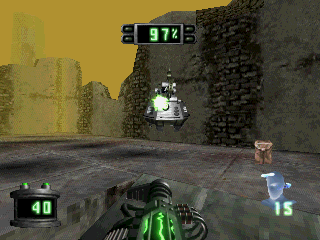 However, one area where things perhaps get a bit too much is in its difficulty. Around the midway point, the challenge really starts to ramp up. Enemies become increasingly tougher, and because levels become considerably more cramped, you can’t avoid projectile blasts as often and might even get shot point-blank. Pick-ups become much scarcer, and using Drain to restore your psionic points is a pain since you have to physically grab them, meaning you could be running up to enemies mid-firefight.

This is exacerbated in some cases by some pretty lengthy levels, such as the Jupiter and Antarctica stages which go on for around 15-30 minutes. To the game’s credit, there are checkpoints you can restart from if you die, but you only get three attempts to do so. If you die again, you have to start from the very beginning. It feels like it was meant to stop the player from brute-forcing their way through stages, but it’s too harsh a punishment considering you already have to go back a good bit. 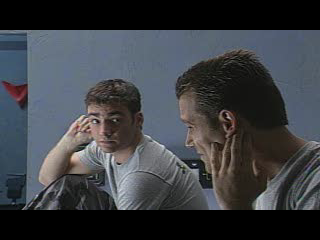 In short, it’s a challenge that players will either rise to with glee, or run a million miles away from. And there’s no real way around it: while you have three modes of difficulty – Practice, Regular, and Hard – the former only lets you tackle the first five levels, while Regular is frequently challenging as is, nevermind Hard. This isn’t an easy game, and you’ll have to decide whether that’s what you’re into or not. At the very least, you have the option of using passwords in addition to saves if you want to visit later levels, though you can’t save your game after doing so. (And there’s the usual cheat codes to give you invincibility, unlimited ammo, etc. if you want to forego challenge and blast everything to kingdom come.)

Playing on Hard doesn’t unlock anything besides an alternate ending cutscene, and that’s as good a time as any to discuss the game’s story. Presented through live-action cutscenes that are clearly shot on a very tight budget and deadline (apparently not even allowing for retakes), it’s easy to laugh at them. However, they’re presented and performed so earnestly that they end up becoming rather endearing, with everyone delivering the frequently cheesy dialogue straight to the point of being compelling. The story itself is fairly typical in its character dynamics and plot developments, but it’s somewhat likeable because of that. If you’re in the mood for some mid-90s TV sci-fi schlock, this is a pretty good take on it. 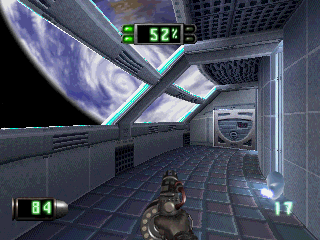 Where Disruptor shines is through its graphics and music. The framerate is consistent to allow for action that looks and plays well, but what really stands out is its art direction. Conceptualized by Catherine Hardwicke (who went on to direct the award winning drama Thirteen and the first Twilight movie), each level uses a distinct color scheme and architecture to stand out from each other, with individual sections having unique designs to help with navigation and level variety. The limitations are even used to create some memorable imagery, thanks to the use of pre-rendered sprites and an atmospheric fog.

Regarding the audio design, the sound effects used are easily distinguishable in the moment and sound appropriate, though they don’t have much more impact than that. Meanwhile, the music does an excellent job at selling both the frantic firefights and the tense pauses in between, dynamically switching between different arrangements to suit the onscreen action. If the dramatic orchestral style sounds familiar, that’s because the music was composed by David Bergeaud, who went on to compose for the first several Ratchet & Clank games.

Disruptor might not be the most notable project to come out of Insomniac Games, but it’s a challenging and impressive title worth checking out for fans of their work or 90s console shooters.

A playthrough of Disruptor streamed by Insomniac, where Ted Price and Brian Hastings discuss the game and provide insight into its development – https://youtube.com/watch?v=u9JnKOgYCFM

An IGN article discussing the history of Insomniac, featuring the creation and development of Disruptor – https://www.ign.com/articles/2012/09/28/always-independent-the-story-of-insomniac-games