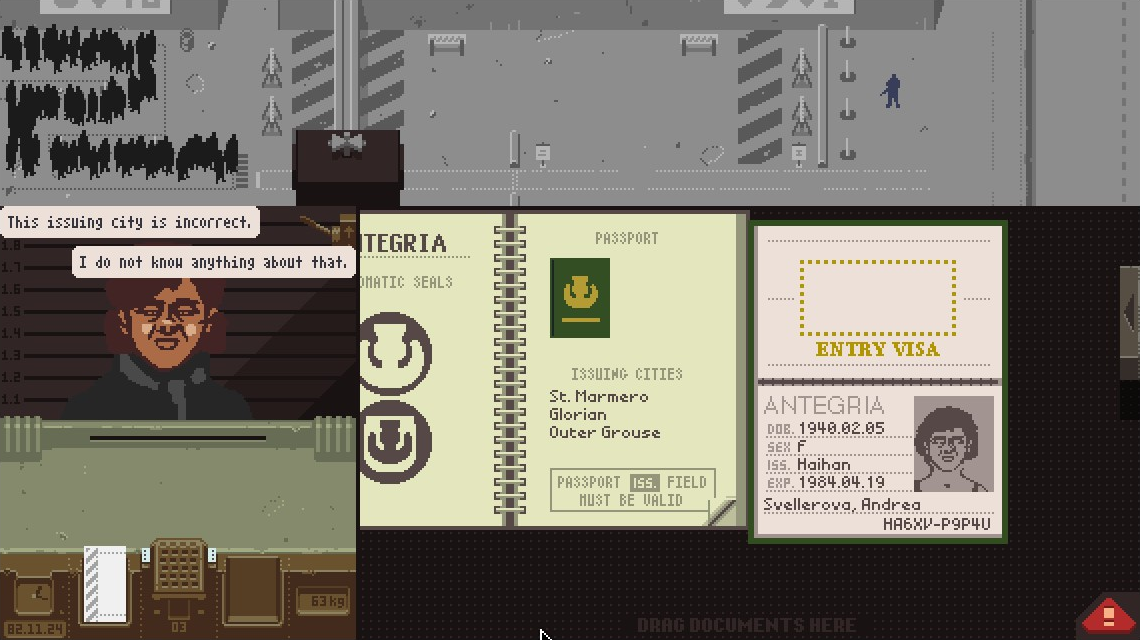 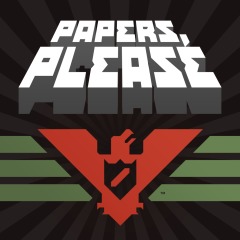 In 2013, Lucas was temporarily living in Singapore, helping to port a game named Rocketbirds: Hardboiled Chicken to the PS3, and having to frequently travel back and forth to the United States. It was this state of frequent departures, arrivals and document inspection that inspired the idea of a game based around a passport inspector with the difficult task of determining who was and who wasn’t granted entry into a country. Lucas had previously developed The Republia Times, a short free-to-play browser game about a newspaper editor who is pressured into printing strictly favorable stories about an oppressive government, and borrowed elements from the setting to create a dystopian Soviet-like country named Arstotzka. 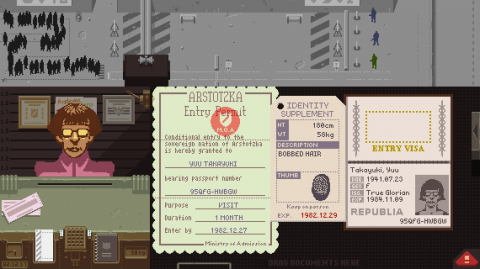 The world-building in Papers, Please is fantastic. There are dozens of touches, some big and some small, that highlight what kind of country Arstotzka is. The way your second day of work is hastily cut short by a terrorist attack, but your third day of work continues on as if nothing has happened. The reaction – or lack thereof – of one of the guards when an angry stranger drops a bomb on your desk, screams “Death to Arstotzka!” and runs out of the booth. The fact that detaining wanted criminals and human traffickers is a task that falls squarely on the shoulders of an unnamed immigration inspector. But perhaps the most disturbing thing about Arstotzka is that in spite of all of this, hundreds of people line up every day for a chance to get inside.

The gameplay in Papers, Please is simple, at least initially. You are the nameless, faceless inspector manning a checkpoint between Arstotzka and Kolechia and your job is to approve or deny entry to anyone who tries to enter the country. On the first day, there is only one rule; you may only admit citizens of Arstotzka. On day two, you can admit anyone, as long as their documents aren’t expired. Then citizens from other countries require a valid Entry Ticket. Then an Entry Permit. Then citizens of Arstotzka need to present ID Cards. Workers then need a Work Pass. Then a scanner is introduced to catch out anyone trying to smuggle medicine or contraband into the country. On Day 14, the official Daily Bulletin issued by the Ministry of Admissions begins including pictures of the three most-wanted criminals of the day, who are to be detained if they attempt to enter the country. Later, an outbreak of Polio mandates that all entrants must present an up-to-date Certificate of Vaccination. By the final days of the game, it isn’t uncommon to be presented with five different documents which not only need to match with the entrant, but also with each other.

As the rules and regulations continue to increase, it becomes a lot more difficult to process every entrant in a timely manner, which is unfortunate as your pay depends on the number of entrants you process correctly. Turning away an entrant with valid documents, or admitting someone incorrectly, will result in an immediate citation. The first two citations of the day are warnings – and you obviously won’t get paid for them – but afterwards, money will be docked from you. This creates a uniquely stressful situation where you want to process as many people as possible, but failure to do so perfectly will hinder more than help. Given the randomized nature of most of the people who will enter your booth, it is entirely possible (though unlikely and ill-advised) to immediately approve certain people at random, hoping that they happen to be correct. And while the slow and steady approach is safer, when you’ve spent half a minute poring over someone’s details, only to discover after you admit them that their name was misspelt, or they were 3kg overweight (potential smuggling) and you didn’t notice, it genuinely feels like a betrayal. 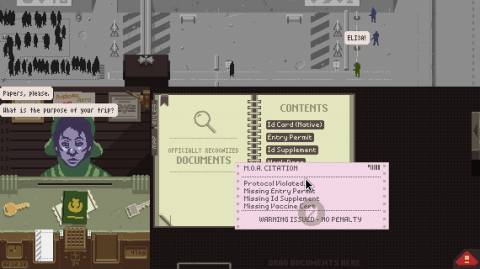 The money you earn is mostly spent on your rent, food, and heating, which you will need to keep your family alive and well. Food and heating are optional, but missing one (or both) will cause your family to become ill, and medicine will cost extra. One or more of your family members can even die, and while the game will continue, if your entire family die, or you run out of money, the Arstotzkan government decide that you no longer represent the positive qualities they’re looking for in an employee and hastily replace you for a Game Over. Despite this, it’s not too hard to keep your head above water, and if you have trouble making enough money, you have the option to accept the odd bribe if you don’t mind the citation, or work with one of the guards to detain more entrants with incorrect documents rather than turning them away.

Readers who might be concerned that all of these rules, expenses and penalties could prevent you from getting too far in the game will be relieved to hear that there is an Easy Mode, which changes nothing except for giving the player an extra 20 credits at the end of every day, which allows a little more leeway in making mistakes; at least until the rent increases, or a relative moves in with you, or a day at work is cut short by a terrorist attack and you’re forced to return home with a much smaller wage than expected. Easy Mode strikes a nice balance between letting players see all of the content that the game has to offer without having to become too proficient at the game, while still offering plenty of challenge.

One of the biggest compliments you can pay to Papers, Please is that even going into the game knowing full well what type of game it is, how it will try to make you feel, and the methods it will use to accomplish this, it is still fully capable of surprising you. The first few moral choices you get are as simple as you would expect – a married couple want to enter the country, and the husband’s paperwork is in order, but the wife’s is not – but then broader plots start to emerge, with an organization plotting to overthrow the government, a man seeking revenge for his murdered daughter, and of course, the irreplaceable Jorji Costova; an affable, good-natured but extremely ill-prepared man who repeatedly attempts to enter with no documents, forged documents, incorrect documents, and occasionally his entire body weight in drugs. 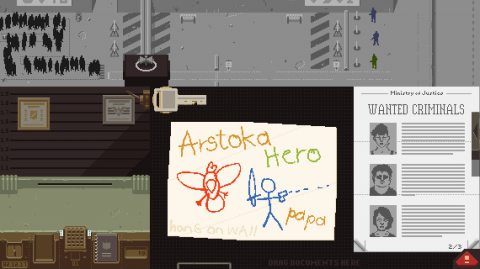 In contrast to the purposefully melancholy graphics and deep, booming soundtrack, Papers, Please isn’t afraid to be funny every now and again, and it’s because of this that the emotional moments stand out. On one occasion you can admit the lover of one of the guards, despite her incorrect paperwork, and while the sadistic buzz of the printer letting you know that your mistake has been noted and your superiors have been informed is no less terrifying, you can watch at the top of the screen as the guard will happily call her name and they’ll both run towards each other and embrace.

Papers, Please can be repetitive in long sessions, and despite the presence of an Endless Mode, there isn’t much to motivate you to keep playing unless you really enjoy checking paperwork. But Lucas Pope created a wonderfully empathetic game, because you truly are the immigration inspector in this scenario, and these truly are your choices to make. How far will you go to serve your country and protect your family, and how far will you go to remain a good person in the difficult position you are in? And to what extent are those mutually exclusive goals? Papers, Please asks the question and it’s up to the player to answer it. Glory to Arstotzka.