The Sega System 24 board seemed to be the go-to place for innovative, two-player cooperative games. Beyond Crack Down and Gain Ground, Sega released Bonanza Bros., a substantially goofy cops-and-robbers themed game. The main characters are Mobo and Robo (Mike and Spike in the Genesis release), a duo of thieves, although the scenario differs slightly between regions – in the Japanese version, they are sent to Badtown in order to break into assorted criminal organizations in order to find evidence, while in the English versions, they are testing out security systems for paying clients.Your goal is to infiltrate a small building, obtain all of the treasures, avoid detection by the guards, and escape, all under three minutes. Stages include museums, department stores, mints, antique shops, cruise liners, and at the end, a pyramid.

Unlike most stealth-themed games, retro or otherwise, Bonanza Bros. is viewed from a 2D side perspective. However, you can also duck in and out the scenery, in order to hide in alcoves and avoid detection. Although you are armed with a weapon, the rate of fire is slow, and the bullets only temporarily stun enemies. Many typical foes can be taken down easily even without hiding, but some require substantially more strategy. The most common are the guards with riot shields, which are invincible from forward attacks and must be shot from behind, but also tough are the bomb-lobbing guys, which require several hits to take down.

This is where the cooperative elements of Bonanza Bros. work best. Like Crack Down, the screen is divided into halves, with each player being to explore independently of the other. The stages are non-linear, making it a matter of having one character distract the guards while the other sneaks up from behind to take them down. You can also open doors to slam unsuspecting enemies, and a few stages have 10-ton weights you can activate to smash them into pancakes. A map screen in the center of the screen indicates the positions of both players, as well as the treasures, though not the enemies.

Such tactics obviously rely heavily on stealth, and this is where the game begins to get a little shaky. The best stealth games rely on consistency, on being able to analyze patterns and know how to react, but Bonanza Bros. doesn’t quite work like that. Most of the time you can hide from enemies by hiding against the walls, but sometimes the guards seem to be able to see through or around them. Sometimes they’ll immediately forget about your presence once you leave their sight, others will become excited until you take them down or leave the screen completely. Most of this is forgivable because, unlike Metal Gear, where all enemies turn aggro the moment you’re spotted, only the enemies that actually see you will try to attack. There are many instances where stealthy takedowns are impossible anyway. But the controls are slightly clumsy and were clearly not designed for fast action. This is especially true given the tight time limit, which almost requires that you disregard stealth tactics every once in awhile to steadily move forward.

Despite being (kind of, sort of) criminals, the theme of Bonanza Bros. is light-hearted and comical. Mobo and Robo look like plastic figures, with large rounded heads and edges. The enemies appear the same way, with some lacking proper limbs and body parts connected by thin air. Other comical aspects add personality, like the bothersome flies that will swarm around if you stand still for too long, or the pieces of junk on the floor that will cause you to slip if you’re not paying attention. It’s also impossible to look at Bonanza Bros. and not be reminded of Activision’s Atari 2600 classic Keystone Kapers, both in theme (though inverted, since you played as the cop in that game) and in the layout of the map. 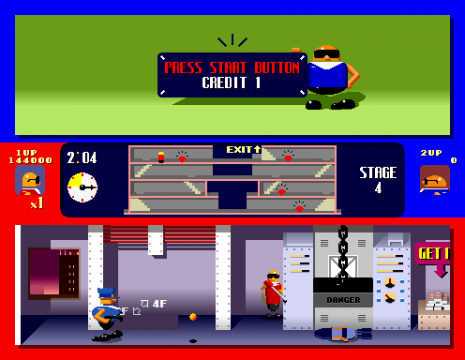 The largest benefit of the Sega System 24 was the high resolution display, which allowed for extremely crisp graphics. None of the consoles of the time could replicate this, so the ports of Bonanza Bros. aren’t quite as nice looking. Otherwise, neither the graphics nor the gameplay were particularly complex, so the game transferred well to home play. The major difference is that most of the home versions limit the number of credits.

The X68000 version, ported by Dempa, is nearly arcade perfect. It utilizes the computer’s high resolution mode to produce graphics identical to the arcade release, and the music is also very much spot-on.

The Genesis version is, for the most part, a great port that looks and plays well, and even sounds a little bit nicer. Unfortunately, it’s missing two stages (for ten total, versus twelve of the arcade), as well as the bonus stages where you need to collect gold while dodging spotlights. The tutorial stage is also gone. However, as a bit of fan service, the art museum stage now features pictures from assorted Sega games. There are also small Pac-Man style story interludes after every few stages. The Genesis version also shows up on the Wii Virtual Console, on the Sega Genesis Collection for PS2 and PSP, Sonic’s Ultimate Genesis Collection for PS3 and Xbox 360, and as an unlockable bonus game in the Japanese version of Sonic Gems Collection. (It was removed from all other regions for reasons unknown.)

The Master System version was only released in PAL territories. It is only single player, which is a double edged sword – while it loses cooperative play, without the need for a split view, the action now takes up the entire screen. You also need to pause the game to see the map. This isn’t a problem on emulators, but playing on the actual system, it’s a huge pain since the pause button is located on the console. The graphics are okay, but not nearly as colorful as the other versions. It’s also easier, considering some of the tough enemies don’t show up until the later stages, but the range of your gun is much shorter to sorta balance this out.

The PC Engine version, published by NEC Avenue, has brighter graphics than the Genesis version, but on a technical level they’re similar. It’s arguably better overall, due to its faithfulness to the arcade version, with all of the levels and bonus stages. The real treat is the jazzy redbook audio soundtrack, featuring synthesized saxophones.

The PlayStation 2 version, published as part of the Sega Ages 2500 line, was bundled together with Tant-R, a collection of mini-games which use the same graphical style (see below). It’s not much of an upgrade from the arcade version though. The graphics have been slightly redrawn, and it runs at a higher resolution than any other version, but due to the blurry upscaling, it actually looks worse than most of the other ports. The soundtrack is also cheap and not terribly good. 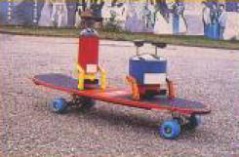 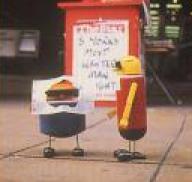 Bonanza Bros. seems to be a bit more popular in Europe than it was in the US. Part of this may have to do with the goofy advertising – the box cover has the main characters inquiring “I’m Mobo, who the hell are you?”, responding with, “I’m Robo, who the hell are you?” The back features photographs of Mobo and Robo as action figures, posed in various real life locations. It adds a lot of goofy attitude and personality which aren’t really present in the games themselves.

It doesn’t hurt that the the European home computer ports are fairly decent, and all support the two player split screen. The Amiga version, produced by Tiertex and developed by Synergy, is excellent, about on par with the Genesis and PC Engine versions as far as visuals. It is a little tough to control, though, since it only supports one button. Therefore, you tap the button to shoot, and hold it to jump, which is inconvenient. All of the other computer ports suffer from the same issue. The Atari ST version is almost identical to the Amiga port, though some minor background graphics are missing and it’s missing sound effects. There are some minor graphical changes too, like the ATM in the front lobby of the first level replaced with an arcade cabinet.

The Commodore 64 version is generally well done, though it feels a bit glitchy, considering that you don’t fall over and drop your stuff when you get hit. Instead, you just blink a bit and your life counter goes down. The Amstrad version is more colorful than the C64 port, but it’s slower, jerkier, and missing music, though it’s still playable. The ZX Spectrum runs at the same speed, though is stuck with monochrome graphics. Both the Amstrad and ZX Spectrum versions are missing the map, though there are several additional treasures to collect in each level. 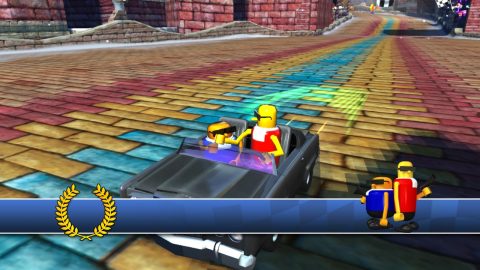 While not nearly as popular as other Sega properties, the Bonanza Bros. show up as playable characters in Sonic & Sega All-Stars Racing, driving a black convertible. When then win a race, they make motions that appear to be them snapping back and chugging a beer. Unfortunately the duo was removed from the sequel, Sonic and All-Stars Racing Transformed. 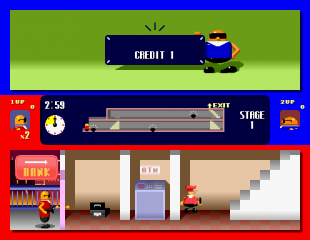 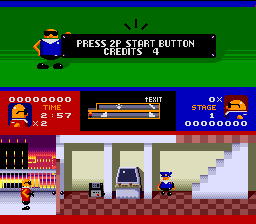 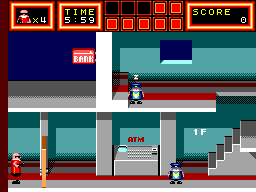 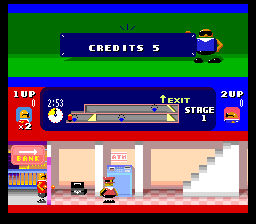 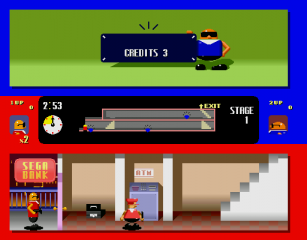 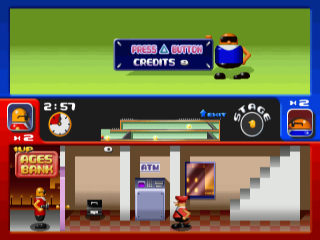 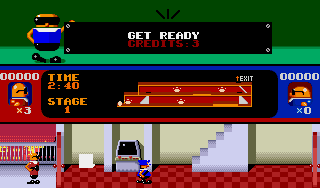 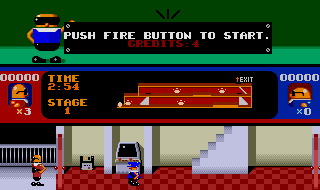 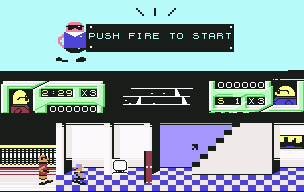 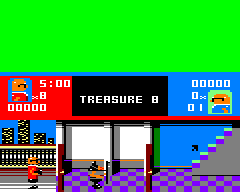 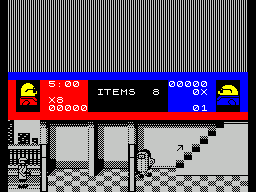 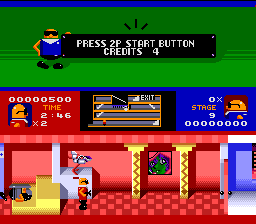 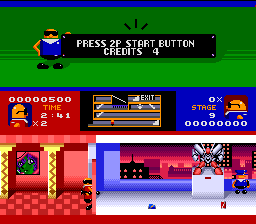 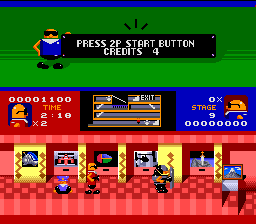 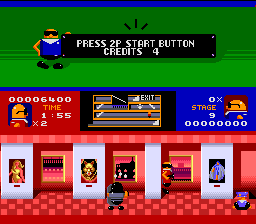 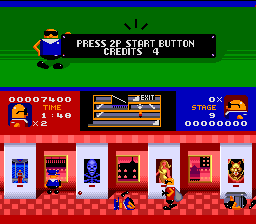 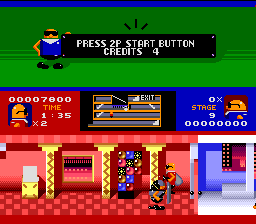 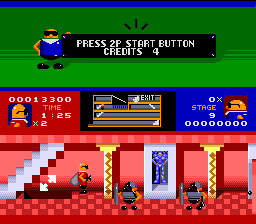 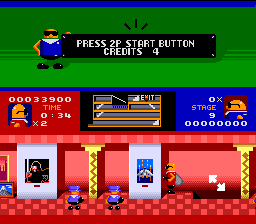