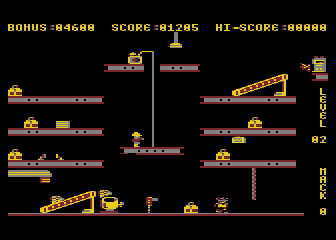 Hard Hat Mack is an 8-bit computer game from Electronic Arts. It’s clearly inspired by Donkey Kong, in that it takes a single screen arcade-style platformer that takes place on a construction site. Instead of simply reaching the top of the screen, each level has its own unique goal. In the first screen, you need to grab girders spread throughout the screen, place them them in the gaps of the structure, then grab the jackhammer that’s mysteriously floating the around the screen to solidify their place. In the meantime, there’s some guy causing trouble running around, along with rivets that are shot from the top of the screen and bounce down. It’s an alright little game. Like Dig Dug, the music stops and goes as you move your character, playing a short little ditty that becomes remarkably catchy despite maybe being four seconds long. But the most interesting aspect is the title screen, which shows all of the characters. 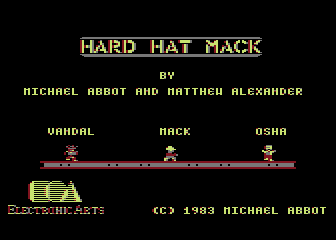 One of these bad guys was a “Vandal”. Simple enough. More confusing was the character labeled “Osha”, which seems like a weird name. But it’s actually not a name, but rather an employee of OSHA, which stands for the Occupational Safety and Health Administration, the governmental division that strives to ensure safe working conditions. Which relates to this interesting story from a 1983 issue of the computer magazine Infoworld:

Earlier this month, Electronic Arts, a home-software publisher based in San Mateo, California, found itself in hot water with the state government. Hard Hat Mack, one of the company’s arcade-style games, was banned from at least one Emporium-Capwell store after a California legislator objected to one of Mack’s enemies, a white-shirted good name OSHA.

In Hard Hat Mack, OSHA runs around the game screen, clipboard in hand, trying to squash Mack, a blue-collar construction worker…California state senator Dan McCorquodale took offense to Electronic Arts’ comic portray of OSHA as a video-game villain and dashed off a latter of complaint to the Emporium store in Santa Clara, California. Hard Hat Mack was anti-worker, he said, and it gave the children playing video games the wrong idea about their friendly federal government. Six days later, the store pulled the video game.

The last laugh may be on Mr. McCorquodale. All of this publicity will probably spur sales of Hard Hat Mack. It’s rare to find a game that is part fun and part humorous social commentary. 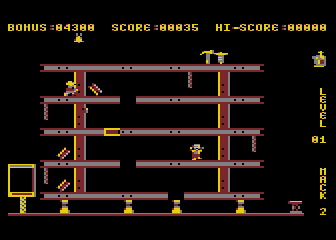 In the long-run, obviously this didn’t affect much of anything. No one really remembers the game nowadays, and since it’s not violent in the way Death Race was, it hasn’t exactly made a mark on history. Still amusing, though.