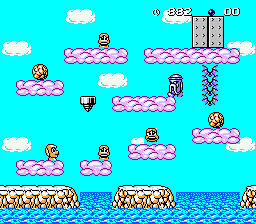 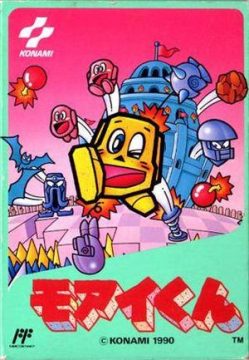 In what perhaps seems like a strange choice for a game, Moai-kun is par for the norm from Konami. The game is a puzzler/platformer that was inspired by the Moai head statues in Easter Island. Though it’s not so odd given that the folks at Konami have liked to insert the Moai head into their games for what has been going on for several decades now. This is just the first time that the Moai head was given its own game.

The Moai head first came to attention of gamers in the original Gradius for the arcade released in 1985, but it seems the Moai had a more low-key debut with Pandora’s Palace, a coin-op game released in 1984. The Moai head went on to become a common fixture in Parodius games and has even made cameo appearances in some of Konami’s popular franchises such as Castlevania and Metal Gear. However, the Moai head went from being a cameo character to a full-blown playable character in Konami’s Wai Wai World, an action/platformer mashup featuring an all-star Konami cast released in 1988. However, the Moai head’s star was on the rise and in 1990 he was given his very own game called Moai-kun.

The story is, the evil Skull Empire has invaded Pucchi World and kidnapped all the island’s inhabitants, the adorable Pucchis. It’s up to Moai-kun to use his wit and strength to save the day and rescue the Pucchis from the clutches of the Skull Empire. 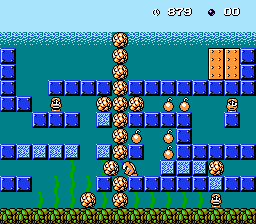 Moai-kun is a platformer/puzzler consisting of 56 stages. On the outside the game is rather quite simple with the main goal being to rescue the Pucchis in each stage to open the door to the next stage. This concept is almost identical to the one found in the classic game Adventures of Lolo and in fact, stylistically both games match up pretty well especially with the cutesy style. The game also does feel like a bit of a throwback to various arcade and computer platforming classics in that each stage is of a simplistic design consisting of one screen structured around multi-tiered platforms to navigate.

The gameplay is a simple – jump and smash blocks with your head, and grab the Pucchis while killing or avoiding enemies. The game also features various things like bombs that can blow up the block beneath you, an earthquake button that flips enemies on their heads and the occasional falling platform. Another interesting thing about this game is that the world is not flat, but round. Meaning if you walk off the edge of the screen, you will reappear on the other side of the screen. If you get stuck in a stage, by pressing Select, you can reset the stage, but lose a life in the process. The game is simple, but it’s also deceptively challenging. Each stage becomes progressively harder to complete. The challenge does not lie in directly battling the evil minions of the Skull Empire, but rather figuring out what blocks to smash so you can rescue the Pucchis AND hop back up to the door out. A simple question that can only be answered with a complicated solution. Any puzzle game that makes you think deserves props.

All said the game ends up being a challenging puzzler, which is pretty much all you could ask for a game of its nature and simplicity. As a curious side note, the game appears to have been originally intended to feature scrolling stages, but that feature was ultimately abandoned for whatever reason, but it can still be accessed with Game Genie codes. That would’ve made things more interesting for sure, but the game still has enough variety and challenge to stay cool and frosty.