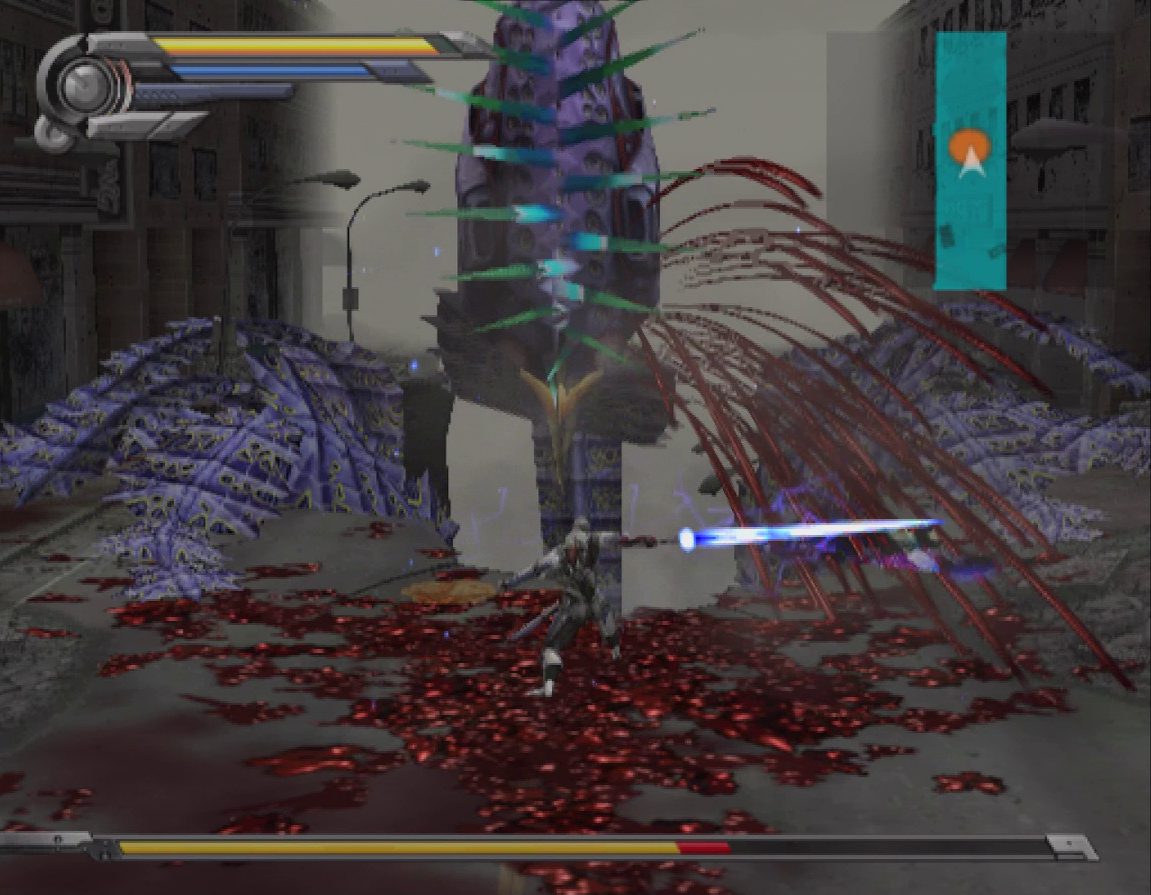 The PS2 was home to all sorts of B-tier action games that spawned from Devil May Cry’s success, from Capcom’s own Chaos Legion to the conceptually absurd but otherwise solid Bujingai. Most of these games have their fans, but Konami’s Nanobreaker was left in the dust entirely. Despite utilizing the engine of Castlevania: Lament of Innocence, a generally well received game, Nanobreaker was lambasted for its repetition, boring environments, and uninteresting story. Even with Koji Igarashi as a producer and Kazuhide Nakazawa (Silent Hill 2 and 3) responsible for the art direction, Nanobreaker is completely lacking in visual or thematic identity, instead counting on the player to embrace the potential of its mechanics. If you’re willing to experiment with the options provided, you’ll find that there’s perhaps a bit more to Nanobreaker than people realized at the time. 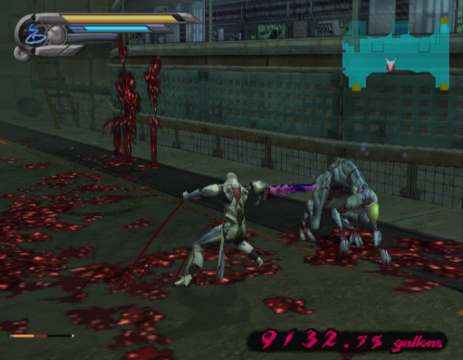 Part of what made Devil May Cry a hit was its entertaining dialogue and charismatic protagonist. Nanobreaker fumbles this right from the outset, with protagonist Jake Warren being about as likable as a piece of cardboard, though the overall premise is at least interesting, if underutilized. In the no longer distant year of 2021, the United States creates an island facility dedicated to the research and development of nanomachines, fittingly named “Nanomachine Island”. All seems well at first until the main computer that controls the island’s nanomachines suddenly goes haywire, causing the nanomachines to create beasts known as Orgamechs by mutating the humans they inhabit. Jake, the cyborg leader of a military unit that was disbanded for killing civilians, is brought out of cryogenic sleep to protect scientist Michelle Baker as she travels to the island to shut down the computer.

Other characters are introduced, such as Keith, a fellow cyborg soldier and former member of Jake’s unit who wants him dead, and Michelle’s father, who supervises the island in secret, but cutscenes are infrequent and brief enough that no one gets much development. Due to his reputation as the “Genocide Hero”, Michelle spends most of the game trying to avoid talking to Jake, so their relationship remains predictable despite them both getting the most screen time. The strangest part has to be the game’s ending, in which Jake, Michelle, and her father attempt to escape from the island via car, only to careen off a broken bridge that Jake forgot to mention earlier. It’s an abrupt, bizarre moment of humor in an otherwise dour game, and raises the question of whether our heroes made it out alive or if they really did just die unceremoniously for the sake of a punchline. 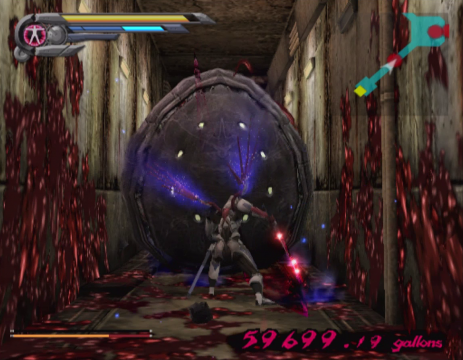 Gameplay is king in Nanobreaker, so most of your time will be spent cutting up Orgamechs using Jake’s plasma blade. Using a combination of horizontal and vertical slashes, as well as “Shift” moves triggered by pressing R1 with either attack button, you can create a variety of combos that usually end in some kind of weapon transformation. At first, you only have combos that end with the greatsword transformation, which is useful for dispersing crowds but isn’t terribly strong. Once you start finding Combo Chips, you can use them to extend your combo trees, granting you access to an impressive arsenal. Transformations like the spear allow you to pierce through enemy armor, whereas other transformations like the axe and scythe let you do devastating damage with enough of an opening. Each weapon has valid use cases and can dismember your opponents in different ways, encouraging you to learn as many combos as possible in order to apply the best weapon to the situation at hand.

To supplement your combos, there are boosters that can be activated to provide Jake with special attacks or buffs that can also be powered up further with enough use. Some of the boosters you’ll get include the ability to automatically reflect lasers, plasma orbs that serve both as a shield and as a way to interrupt enemy attacks, and a double-sided plasma blade that devastates even the nastiest of foes. It’s a good thing booster energy isn’t hard to come by, because it’s unlikely you’ll max out more than one of them without regular use and some grinding. 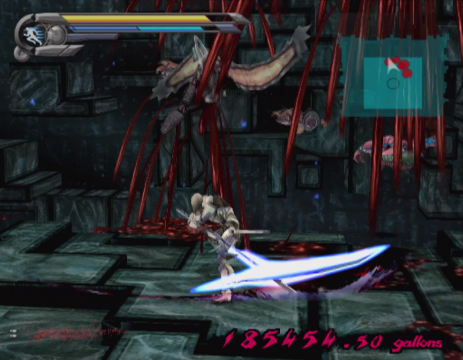 Nanobreaker revels in its excessive gore, with every attack you pull off causing ridiculous amounts of blood (it’s referred to as oil in-game, but they’re not fooling anyone) to gush from your foes. This isn’t just for show though, since spilling as much as possible has in-battle benefits. As your trail of carnage grows, Jake’s limiter will eventually turn off, represented by wings sprouting out from his body. This temporary mode gives you a significant power boost and adds secondary effects to certain combos. Every time you hit certain bloodthresholds (measured in gallons), Jake will recover some health or booster energy, or you’ll get a permanent upgrade to your health or booster gauge. Considering that healing is otherwise rare (neither save points nor continues heal you), this encourages you to remain aggressive to stay alive. The system isn’t perfect here, considering that it leaves you with no way to heal during boss fights, but it’s commendable for trying the idea a decade before games like Bloodborne and 2016’s Doom would perfect it. If you want to make things extra silly, you can also change the color of the blood to several different options, including a rainbow option that makes the game look like a Skittles commercial.

Jake also has a plasma whip that can be used to capture enemies, drawing them to him. This functionality is great on its own, but it’s also possible to do what’s called a “Capture Counter” by attacking right as the enemy lands at your feet. Doing so results in an instant kill against most foes, making it easier to deal with opponents that shoot projectiles. The capture also has situational applications as well – during segments where you have to escort Michelle, you can pull her out of harm’s way, and it’s also used to pull certain bosses out of their shells so you can properly attack them. It feels like a predecessor to Nero’s Devil Bringer in Devil May Cry 4, since it’s a tool that gives the player the ability to strategically engage and thin out herds on their own terms. 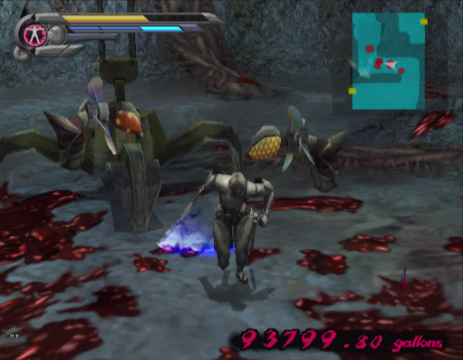 While cutting down swarms of Orgamechs is entertaining, the highlight of the game is the boss fights. These encounters offer some complementary spectacle and they also provide sufficient tests of skill, especially when you contend with Keith, who has a moveset that’s nearly the same as yours. One particular boss is a massive tank armed to the teeth, and you’ll have to slowly pry away at its defenses in order to reveal the vulnerable, fleshy core within. Another boss, the Mammoth, subverts this setup in a clever way – the fight starts with a shell-like exterior that shoots lasers, but once you destroy it, things actually become more challenging, since exposing the boss makes it more aggressive than before. Aside from the three phase final boss fight that feels downright cruel, they’re well balanced affairs that can be approached in several ways based on the player’s combo and booster preferences, supplementing the game’s best elements.

Despite IGA’s pedigree, Nanobreaker is far from being a Metroidvania, containing bland, linear environments with few secrets to be found. You do get additional mobility options like a glide and double jump, but they have limited applications. The game starts out on gray, dilapidated streets and most of the environments afterwards retain that grayness. There are at least some varied challenges throughout, such as a cage match that requires you to kill enemies before they weigh down the cage enough for it to sink into the acid below, and a sequence where you have to launch enough enemies into a crusher on a conveyor belt in order to break it. The soundtrack is rather strange too, mostly featuring tracks that try to go for a somber, melancholic atmosphere that doesn’t fit the action at all.

There are some nice bonuses to unlock, including the ability to play as Keith, as well as Jaguar from Neo Contra, who has blistering offensive capabilities in exchange for a miniscule health bar. The hard mode provides a greater challenge by giving enemies new attacks and the “Splatter Mode” is a fun bonus that asks players to simply cause as much damage as possible in specific scenarios. At the time, it was possible to submit your best scores to a Konami website, but that website unsurprisingly no longer exists. 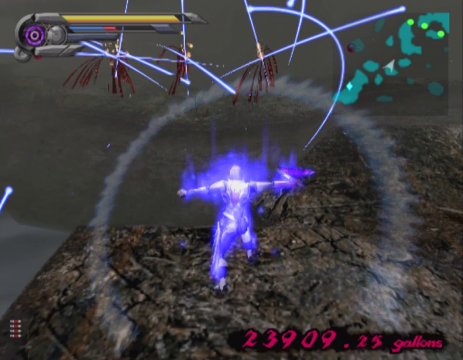 Nanobreaker is a game of interesting, practical ideas hidden within an unappealing wrapper. Konami was clearly onto something with some of the combat mechanics, since several future games would use similar ideas to greater success. Despite its potential, the only acknowledgement Nanobreaker has received since its release is in the form of a Yu-Gi-Oh! card, which curiously depicts a female cyborg that isn’t Jake, leaving one to wonder if this character was a scrapped idea once meant for bigger things.