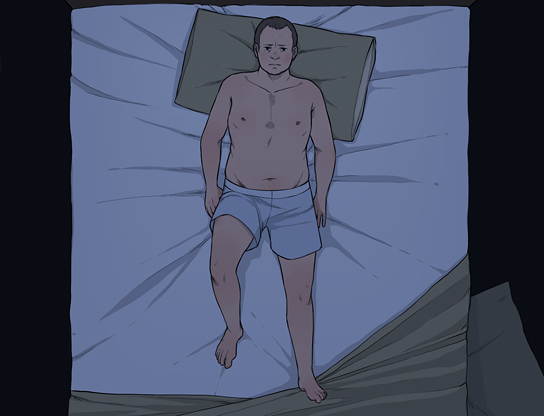 Indie gaming has been involving for a good while, and one of its most popular subgenres in the western world has become the narrative game. Many of these developers are more interested in telling a story than presenting a traditional game for a player to have fun with, and it’s been met with mixed responses, mainly due to how so few of these developers understand how interactivity with their chosen medium can change the experience. But it’s unclear if these developers even think things through that far. Some are so focused on capturing an idea or feeling that all the flaws in their title can’t take away the sheer impact.

Actual Sunlight is one of those games. It is also not a happy game by any stretch of the imagination.

The designer, Will O’Neill, grew up in Toronto, Canada all his life, working not in any sort of videogame related field, but a creative director at a communications agency that had no real reach outside his home city. His real dream and passion was not in gaming, but in writing, creating a very darkly comedic and biting style founded in his own depression and self-loathing. To this day, subtly is not his strength, but sheer, unrelenting honesty at the cruel realities that surround us and his own many shortcomings, or at least as he sees them. His weight, a sense of lacking skill or talent, no significant others. These qualities, mixed with his crippling depression, made his twenties, as he describes them, a “black hole.” Sometime in his early thirties, his issues finally piled up, and he ended up nearly killing himself, though didn’t go through with it in the end. 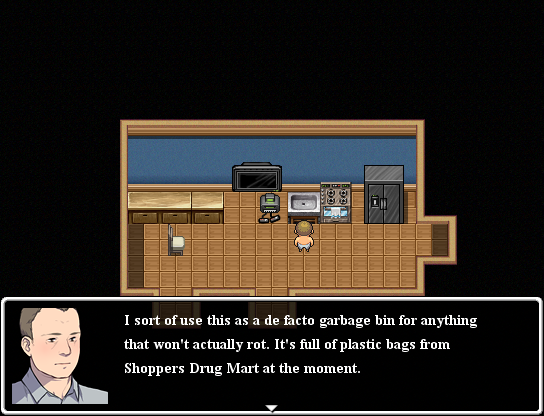 Actual Sunlight was O’Neill’s attempt to capture something beautiful about life in one of the ugliest times of his life. Picking up a copy of RPG Maker and playing with it for a bit, he eventually found a way to make the medium he’s been familiar with as a player work for him as a storytelling tool.

The title cast you as Evan Winter, who is effectively the creator himself. He’s a cog in the corporate machine that longs for a relationship with one of his co-workers and constantly day dreams in fantasies that cast him as different people with varying degrees of success, or he contrives satirical bits that expose his problems with the world and himself. He also occasional has thoughts that tell him to do things, like go to the roof and jump off. Evan Winter is not a well man. His story is told in two days, one regular day of work, and one years later where everything comes crashing down.

Make no mistake, this is practically autobiographical. A few names are changed and people combined into a single character to make the narrative run smoother, but the thoughts of the main character are thoughts O’Neill has had in his life. As you walk around and interact with the world, you’re interrupted by black screens of white text that type out some sort of skit or give some of Winter’s thoughts, and all of these skits range from cynically hilarious to crushing in how frank and grim they are. It’s not just Winter hating himself or people that have annoyed him, but monologues where Winter tries to ease his guilt for his many failures in relationships, or a direct address to the player about the events they’re about to play through. O’Neill is very clear about all of this, including that you shouldn’t see yourself in Winter if you haven’t wasted your twenties the way he did. All this horrible truth and fire spitting gives a power to the game’s writing that overrides every shortcoming. 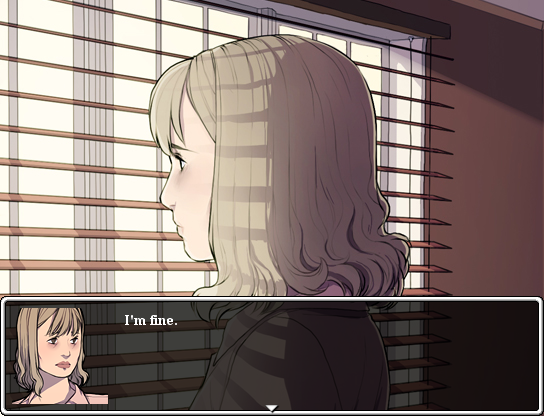 The game, even in its final form, is made crudely from RPG Maker, with the default portraits for unimportant NPCs used instead of new art. It does create an uncanny valley effect at times, but it’s clearly a choice based on budget. Very few tiles are custom made, and the well done CG art mixed in (from the talented Archia) doesn’t particularly match the game’s regular classic RPG style brought on by the engine used. But all these ugly contradictions seem to fit, if only because the story being told is about Winter’s (and O’Neill’s) ugly hypocrisy. Nothing about their story fits as it should, because they’re mentally poisoned, and the cheap production actually manages to compliment this in some way. It’s distracting at times, especially the generic menus, but you forget about it quickly as the story begins to move into that second day.

The game presents a familiar story to us. Man working in the office world is dissatisfied with his life, and he begins to take action to change his life. But this isn’t a feel good comedy, but an exploration of a man in deep depression with suicidal thoughts. Winter can’t simply take positive steps to improve himself, and even his attempt to tell off his terrible boss backfires on him. There are no cheers for him from his coworkers when he says what they’re all thinking, and the bad guy actually has a point. He knows how awful he is, but unlike Winter, he’s perfectly comfortable with it. There are no second thoughts, no worries that he’s not what he could be or that he can’t connect with people, just pure greed and self-satisfaction. He’s everything we hate about the world of management, and yet he’s the one who somehow takes the high ground in the confrontation. 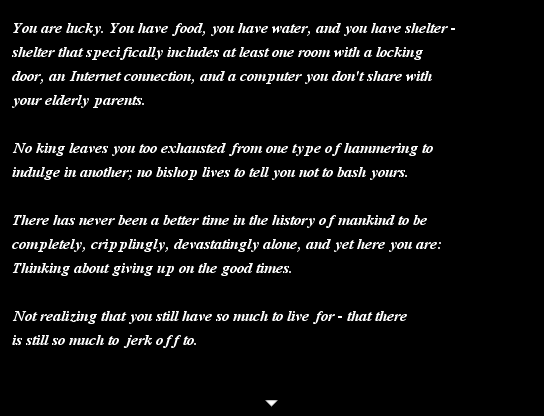 It’s not hard to see why. Throughout the game, we get to see what a normal day in Winter’s life is. His motto is “why kill yourself today when you can masturbate tomorrow.” He wound himself up in a relationship doomed from the start because his failure to do the right thing due to his own insecurities. The woman he had a crush on partly left because of his unsettling behavior. He buys games he doesn’t even want simply out of convolution, and despises himself for it later once the high of some online battles wears of. He hates looking at himself in the mirror, and he doesn’t even bother to cook himself a decent meal every once in awhile.

But Winter is not despicable, and pitiable isn’t the correct description either. If anything, Winter is human, possibly one of the most human game characters ever created. He’s a tragic figure, with countless faults that you at least understand, if don’t fully relate to. All the narration creates this complex, wonderful mind, and it makes the ending all the more powerful. He has so much promise, and he wastes it because of problems significantly beyond his power alone. He lives in a self-fulfilling prophecy, and when he violently tries to break out of this rut and change his life for the better, it’s simply not constructive. That second day is a mess of chaos, anger, frustration, grief, and despair, and it hits home incredibly hard. 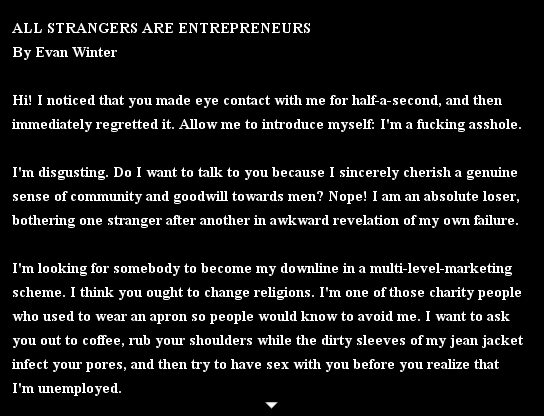 The game uses its medium well to its advantage, with little moments that add to the mood of the character. Trying to find a seat on a crowded bus, triggering scenes the way you’d randomly comment on something in your mind while in a bored haze. This feels like how a game should, where the player is central to the story, though not necessarily how it plays out. The player is important because they are poked and prodded by the game and everything in confronts them with, and it creates something terribly beautiful for the player to take in. This story simply wouldn’t be the same in just text, the impact would be lost. Unlike so many failed narrative experiments, Actual Sunlight respects its medium and does something new with it.

In real life, O’Neill chose to live and became a writer proper, mainly in the land of indie gaming. Of note, he’s written for Planet of the Eyes, a title about a lone robot chasing an unknown signal, and is making Little Red Lie, a biting commentary on the failing economic state of the western world. He’s even writing for the sequel of Always Sometimes Monsters, creatively titled Sometimes Always Monsters. He’s become a fixture in the medium’s smaller circles, even helping judge writing for gaming award panels, and his uncompromising voice is certainly a breath of unwelcome but much needed air.

Actual Sunlight was what made people pay attention to him, and for good reason. It’s utterly brilliant in so many respects, and turns all its technical limitations on their head for the sake of something small yet powerful. The game can be beat in about an hour to two, but it doesn’t leave you after you’ve played it. It’s one that needs to be played (minus those who may be disturbed by the themes at play, especially those suffering from depression themselves). There are as few games as beautifully, grossly human as this.