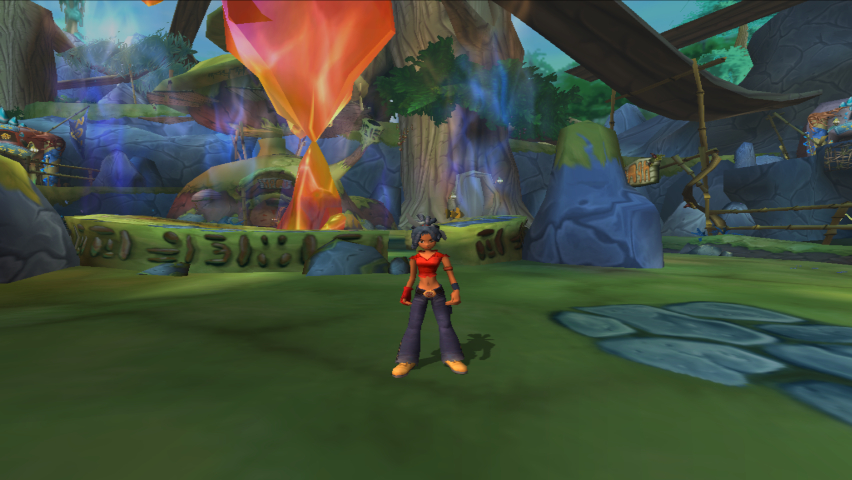 The PlayStation 2 was home to a lot of great titles that were simply underappreciated when they came out. One of those games is Kya: Dark Lineage, a wonderful third-person platforming action-adventure game that is now sadly forgotten. It was developed by French company Elden Games, known for titles such as Test Drive: Unlimited and Alone in the Dark (2008), and published by Atari back in 2003.

Kya: Dark Lineage is a 3D platforming game set in an exquisite, cartoon-like, fantasy world that aged well. You take on the role of the heroine Kya; a courageous blue hair girl equipped with a boomerang and some martial art techniques under her belt. The game kicks off with a cutscene showing Kya and her half-brother Frank as they get sucked into another dimension through a portal which Frank unlocks inadvertently.

Kya then awakens with three Nativs (animal-like creatures) looking down on her. shortly after, Kya and the Nativs are ambushed and chased by werewolves called the Wolfen. Kya’s only choice is to flee from the danger that befell her and survive until she reaches the Nativ City along with Aton (a Nativ who leads you to the way). After surviving the chase, Kya meets up with the village leader Atea who explains to her that the Wolfen are actually Nativs but mutated by the evil tyrant, Brazul. She also learns from Atea that Brazul has held her brother hostage for his experiments. Upon hearing the news, she makes a vow to rescue her brother from the clutches of Brazul and restore peace to innocent Nativs. 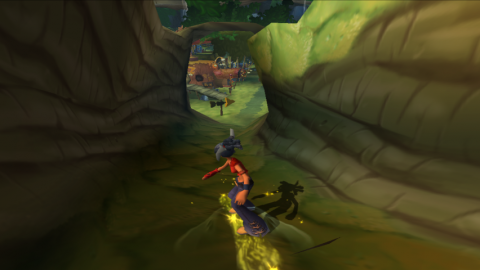 Kya‘s gameplay is a hybrid of beat-em-up, platforming, and exploration. The player goes through several levels while completing objectives that are often shown on the map. However, before delving deep into the adventure, the game starts by teaching you the basics of combat. Unlike some platforming games that use superpowers, Kya uses her fists and legs to defeat her foes. At first, the moves are pretty basic and nothing too acrobatic. Players only have to press the square or triangle button at first. However, upon progressing further, players learn new moves by buying ” bracelets” that act as an upgrade. These upgrades will help the player to perform more powerful and complex combos later in the game. The newest combos are extremely helpful, and not only that but upon purchasing the latest bracelets, Kya can actually guard and parry enemies attacks which helps to make the game easier.

These bracelets can be bought by collecting what’s called “nooties”. These nooties will be an aid to the player as they’re necessary not only to upgrade Kya’s moves but also to purchase items required to progress through the game. These items include the ability to perform wall jumps seen in the classic Prince of Persia trilogy, climb slippery surfaces, increase mobility and health, as well as, other necessary items.

While it may seem obvious from the first glance that Kya: Dark Lineage borrows from other 3D platformers, it still manages to pull off some unique mechanics that make playing the game feel unique. Diving deeply further into the gameplay, one of Kya’s best tools is her boomerang. The boomerang will be your only friend when you have no one around. It may seem useless when you first get it, but the boomerang can be used for many things. For example, you can launch the boomerang to open doors that Kya cannot access, cause a bomb to explode. In addition to this, Kya can also launch the boomerang, and control it remotely to access distant places. Bear in mind that the boomerang can also be upgraded by buying the newest one from the shop. At first, players obtain a wooden boomerang, then a silver, and lastly a golden one. With each new boomerang, Kya obtains new abilities.

There’s a neat transition from platforming to beat-em-up and vice versa in Kya: Dark Lineage. One moment you’ll be jumping from a corner to another while exploring the surroundings, and the next moment you’ll be infiltrating the Wolfen’s base. Infiltrating the base may seem like a walk in the park, but the developers have done a great job at making the base feel menacing and dangerous to get into. Sometimes, Kya will have to be stealthy in order to get in. Otherwise, one mistake and the Wolfen will alarm his comrade, which is not a good idea. 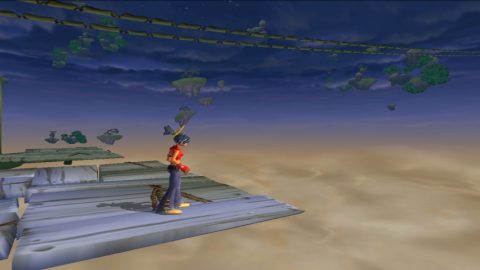 Defeating the Wolfen is quite easy, but the bigger ones can be challenging. Once you defeat a Wolfen, you can revert them back to their original Nativs state by performing a sort of exorcism. It’s an ability that she gets right off the start. When you revert the Nativs back to their state, they end up in the village. As a result, you get access to new shops that weren’t available before. These shops contain new items and bracelets.

What’s interesting about Kya is that it has this interesting idea of showing a sneak peek of your upcoming item from the shop. When you get back to the village, you’ll see those indicators that’ll guide you to your newest item. It saves you from spending time searching for it.

Another interesting mechanic in Kya: Dark Lineage is that she can fly. Well, not use her wings and fly, but she can perform a sky fall by jumping from the sky. Kya is all about the sky falling. The view is breathtaking, and the atmosphere is just superb. Still, this aspect of the game, despite being cool, it can get pretty annoying at times. The controls aren’t the best, and they’re hardly manageable at times. For example, when trying to avoid an obstacle you may find yourself colliding with it, or worse, crashing right into it when your intentions were to avoid it in the first place. This is something that can be annoying, especially when there are a lot of obstacles to dodge.

In addition to sky falling, the game has another interesting aspect, which is boarding. Unlike sky falling, the boarding mechanic has tight controls. You make Kya lean into the corner to keep her stable and gently move the joystick to avoid prickly vines, spiders, and fire. The boarding also works as a way of transportation in the village which can be relaxing at times.

On the visual side, Kya‘s graphics have aged well. The game’s visuals feel unique. It has a beautiful world that is seriously charming and calming. You’ll find yourself moving the camera around and looking at how beautiful Kya‘s world is. The camera can be a nuisance as it can completely destroy the player’s experience when it ends up being stuck in a specific corner, unable to move until the player moves somewhere else. On the music side, there’s nothing too memorable. Sure, the first levels have a couple of soothing soundtracks, but once you’re past those levels, you’ll pretty much find yourself listening to pretty much the same thing.

A great deal of dedicated work was spent on the making of Kya: Dark Lineage. The voice acting, the plot, and the character designs are nicely done. It is how a 3D platforming game should be.