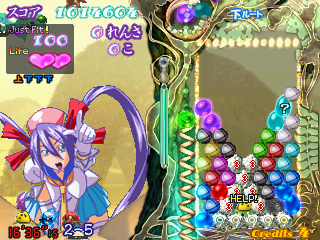 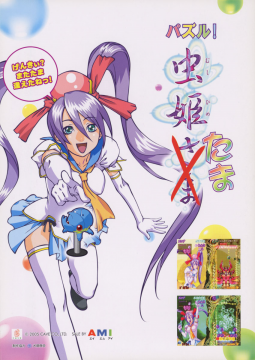 With the success of Mushihime-sama everyone wanted to know what Cave would in store for the series. No one was expecting the series’ next entry to be a sequel to a puzzle game originally released in February 1998, Up Poko (lit. lots of fish). Puzzle! Mushihime-tama is a spiritual sequel to Uo Poko, replacing the underwater motif of the first game with the look and feel of Mushihime-sama‘s world; with Reco taking over as the main character of the game.

The story of Puzzle! Mushihime-tama is rather silly, and doesn’t take itself too seriously. Like Super Mario Bros. 2, the whole game takes place in a dream, a young Reco’s dream, to be specific. Young Reco is dreaming about herself in the future, after becoming the goddess of Shinju Forest. For reasons unknown, Reco must save the Kabutan, baby Koju trapped under “Rainbow Stones.” If Reco doesn’t hurry, the Kabutan will be eaten by the bigger Koju. Thus, Reco goes to five worlds to rescue the trapped Kabutan before it’s too late!

Uuuuum… if you want to learn more, check out the Mushihime-sama character entry.

Tiny little round Koju babies. They’re stuck in piles of rainbow stones for some reason, and Reco has to bust them out of there!

The gameplay in Puzzle! Mushihime-tama can best be described as a “reverse Puzzle Bobble with a pinball plunger”. Rather than shooting balls from the bottom of the screen, players will launch colored spheres from the left side of the screen in an attempt to free the trapped Kabutan in each stage. After a certain number of spheres have been played, the ground will start to rise up one row at a time. This will continue until the player frees the Kabutan or loses a life by having it raise too high. Successfully clearing three or more spheres will prevent the stage from rising on that drop, but will continue on the next non-clearing drop. The game is played entirely without buttons, only using the joystick. Pulling back on the joystick manipulates the strength of the plunger, and releasing the joystick causes the plunger to launch the sphere onto the field from the top of the screen. When first starting the game, the strength and placement of the sphere will be denoted by a dotted line on the game board. This dotted line gradually fades away over time, eventually becoming completely invisible. The line will reappear if the player loses a life, and will once again fade away a few stages later.

Each world in Puzzle! Mushihime-tama consists of six stages, with the final stage being a boss fight. The non boss stages are cleared when the Kabutan is able to escape from the pile. This is different than in Uo Poko, where the player would need to clear all spheres from the playing field to complete a stage. The boss stages have Reco throwing burst seeds at a large Koju as it shimmies back and forth, trying to make it to the top of the screen. If the Koju makes it to the top of the screen, Reco will lose a life. Successfully clearing a world’s 10 stages, allows Reco to progress to the next world. The next world is actually selectable by holding up or down on the joystick, allowing the player to choose from a branching path system. 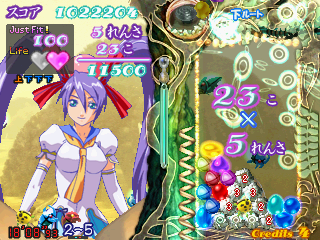 Puzzle! Mushihime-tama introduces a few new techniques not present in Uo Poko. The most noticeable being the Fit and Just Fit techniques. A Just Fit is performed by landing a sphere perfectly in-between the space where two other spheres meet. Getting 100 Just Fits will award an extra life for the remainder of the game, and will persist even if the player continues from a game over. The other, more difficult technique is the Counter Hit. After a sphere is launched, there are a few seconds before the next sphere is loaded onto the plunger. By pulling the plunger down before the next sphere is loaded, and releasing it after the sphere is released, hitting the sphere as its dropped will launch it at a much greater speed and force than normal. This technique is crucial when the player needs to smash through large numbers of breakable gems. The Counter Hit technique also doubles the scoring potential of that move. As the game goes on, Reco will react to the player’s actions, such as cheering, pouting, and even humming a tune. When things get really dire, Reco will sometimes throw a Burst Seed into the plunger chute. Burst Seeds will destroy all gems within a certain radius from where it lands, but usually happens too late to really make a difference.

Everything in Puzzle! Mushihime-tama is pre-determined, with the gems and the sphere order being the same every time. Therefore, scoring is based on how fast a level can be cleared, and in the fewest amount of moves. However, since the quickest solution will always be the same on each play through, it becomes a rather moot point, having time being the real factor. Of course there are Just Fits and Counter Hits, but they too become part of the solution, which again, become trivial once learned.

That being said, Puzzle! Mushihime-tama is a fun little game the first couple of times playing it. Thanks to the SH3 hardware, the game is quite a step up in presentation from Uo Poko, with Reco’s reactions managing to bring some charm and character to a puzzle game. The plunger mechanic may take some getting used to, but it works well enough. As of time of writing, Puzzle! Mushihime-tama does not have any ports, and can only be played in arcades or SH3 compatible versions of MAME.