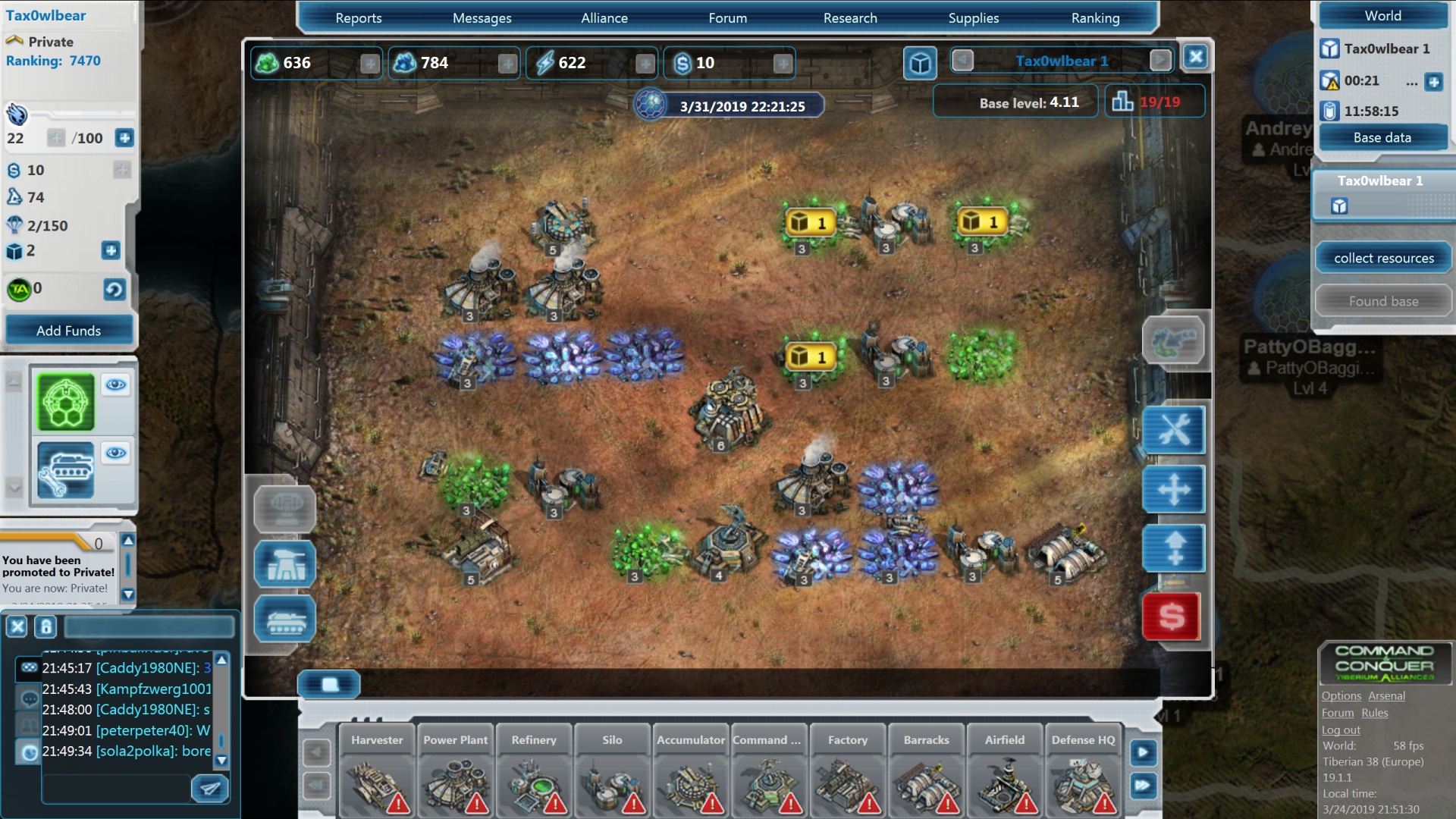 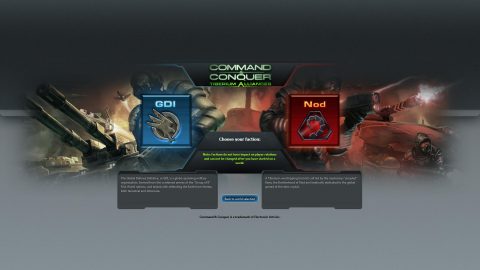 The release of Command & Conquer 4: Tiberian Twilight caused a lot of resentment among long-term fans of the series due its departure from established game mechanics and lackluster plot. The installment in the series, Command & Conquer: Tiberium Alliances, strayed even further from the roots of the franchise, but had the distinct advantage of being a free-to-play browser MMO instead of being not only a main installment, but the concussion to the entire Tiberium series.

Tasked with the development of Tiberium Alliances was EA Phenomic, a German studio known as Phenomic Game Development until their purchase by Electronic Arts in 2006. EA Phenomic had previously worked on Lord of Ultima, also a browser MMO spin-off of a franchise acquired by EA and not handled to everyone’s liking. That said, Lord of Ultima turned out to be popular enough to receive a kickstarted spiritual successor with Crown of the Gods after the former’s servers were shut down, which speaks for EA Phenomic. After EA Phenomic was disbanded, Easy Studios took over the development of Tiberium Alliances before it was handed to Envision Entertainment. The latter consists primarily of former Phenomic staff, whereas Easy Studios started out as a division of DICE. 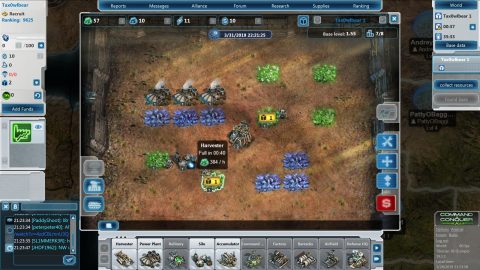 Tiberium Alliances is set between Command & Conquer 3: Tiberium Wars and Command & Conquer 4: Tiberian Twilight. Its main antagonists are The Forgotten, humans who survived the exposure to Tiberium, the crystalline substance that is the basis for all conflicts in the Tiberium Series. Usually lethal, The Forgotten were instead mutated and became social outcasts. On the plus side, their mutations permitted them to survive in areas otherwise rendered uninhabitable by the ever-spreading Tiberium. After their retreat into zones now known as the Forgotten Lands, the mutants acquired the Tacitus, and alien data matrix, under the leadership of a mutant named Athos.

This backstory, which is not elaborated on anywhere in the game, sets up the world of Tiberium Alliances: all servers feature a flat world with the Forgotten Fortress, a well-defended mutant stronghold, in the center. The rest of the map is divided into various cake slices new players can chose from. Once in the game, they are provided with a base and some starting resources. The gameplay loop is simple: players build up their army and base, attack mutant outposts, and, after forming the titular alliances, take over the mutant fortress together.

Of course things are not quite as simple. Tiberium Alliances is ultimately a FarmVille-style timewaster. In order to take over the Forgotten Fortress, an army needs to be assembled. To build and train troops, production facilities are required. These need power as well as Tiberium and blue crystals. For some reason, these blue crystals are apparently not the previously established blue Tiberium – a more valuable variant of green Tiberium – but just crystals that happen to be blue. Both resources need to be harvested with Tiberium harvesters. The list of resources continues with command points, which are gained over time and spent on attacking mutant outposts and the bases of other players. However, at the end of the day, players will spend one resource more than any other: time. Everything in Tiberium Alliances is timed, and even players with plenty of resources will soon or later be told that they have to wait another 9:42 minutes before they can upgrade their construction yard. 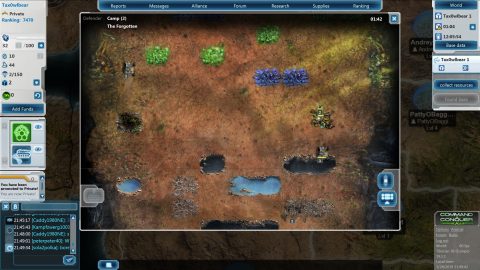 Speaking of which: all buildings and units can be upgrades, with upgrades being small and incremental. True to freemium game design, individual upgrades to almost nothing, but combined they add up eventually. Naturally, it is not possible to simply set up a base, expand it, leave the game, and come back a month later to see it filled with piles of resources. Bases need to be upgraded regularly, resources want to be collected, and maybe someone else decided to raze the base entirely while it owner was offline. This will not erase all progress, but be a setback and incentivizes player to log in regularly.

Once enough resources have been invested, it is time to strike. More often than not, The Forgotten will be at the receiving end of an attack, but brave player can also raid other player’s bases for supplies. The combat system is probably Tiberium Alliances’s strongest feature. Before the assault, all units are assign spots in multiple rows. Once the assault starts, these rows will attack the target base in waves, shooting everything in their path before they reach the opposite end of the battlefield and are evacuated. Army composition and unit placement are fairly important in this reverse tower defense segment, and seeing a planned attack being executed after the planning phase can be quite satisfying at times.

However, as soon as the troops are back home again, they need to be healed and repaired, and new command points are needed before the next assault can take place. All of this is by design, as to no one’s surprise, all the waiting can be reduced significantly with a little bit of cold, hard currency. Real currency, that is, not some fictional freemium gold coins. Like all mobile or browser games of its kinds, Command & Conquer: Tiberium Alliances baits player with a feeling of progression and constantly increasing numbers, before slapping them in the face with yet another cooldown. 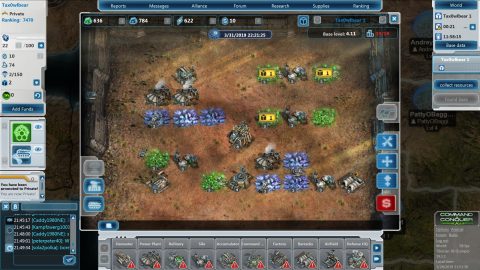 Graphically, Tiberium Alliances is above-average, thanks to designs lifted from Tiberium Wars (as well as Warhammer 40,000, which prompted some redesigns) but with regards to gameplay, it could be any game of its kind. Nevertheless, it retains a player base even years after its release, and avoided major fan backlash due to its nature as a spin-off. The Red Alert universe was to receive its own version of Tiberium Alliances, aptly named Command & Conquer: Red Alert Alliances, before the idea was scrapped in 2015. Tiberium Alliance’s true successor in the freemium department would be Command & Conquer: Rivals.