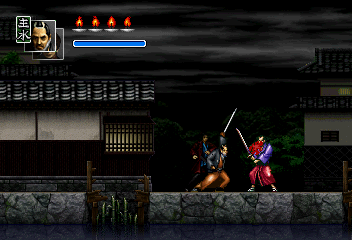 In Japan, period dramas occupy a place roughly equivalent to that of cop shows in America. Countless have been produced from the early days of television to this day, and countless more will be, no matter how similar they may be from one episode to the other and from one show to the next.

A common setup involves a group of do-gooder samurai or ninja, sometimes wandering from town to town, sometimes not, who disguise themselves as ordinary people in order to investigate wrongdoers, dramatically revealing their identity before the final confrontation. That the starting and ending point of every episode is nearly always the same doesn’t mean there isn’t plenty of room in the middle for different stories; and that so many series resemble one another doesn’t mean there isn’t space for different approaches and degrees of quality. 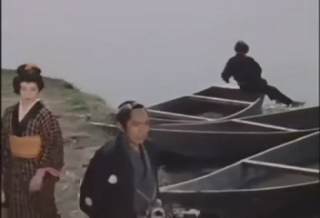 Among the most popular and influential period dramas is the Hissatsu (translated as “Sure Death” in the one official North American movie release) meta-series. First broadcast in 1972, it has spawned nearly 700 45-minute episodes, 28 TV movies and special episodes, 11 theatrical films, and a handful of video originals, with a new TV movie produced every year or two since its 2007 revival. Revolving around groups of assassins-for-hire who ply their trade around feudal-era Edo, it pioneered a darker tone and aesthetic, while maintaining a mainstream appeal through lighter comedic scenes. By day, the assassins are ordinary people who occupy manual or otherwise middle-class professions; by night, they plot and move on their targets, all of them unambiguously evil men and women who’ve done some wrong to “justify” their deaths. The assassins are euphemistically known as “workers”, and their method of killing often incorporate tools used in their daily trade.

Though the protagonists sometimes change from one series to the next, Hissatsu has most often focused on a low-ranking samurai by the name of Nakamura Mondo. 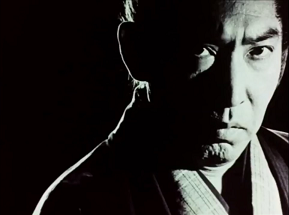 Introduced as a comic relief character on the show’s second season, Mondo appears to the world as a lazy, fumbling assistant-constable, forever stuck in that low-level position despite being well into middle-age, earning him constant nagging from his wife and mother-in-law. What his colleagues and family don’t know, of course, is that he is one of the deadliest swordsman in Japan. On the fifth season, he graduated to lead character for the first time, and would go on to star in over half the different series and most of the movies from that point on until actor Makoto Fujita’s death in 2010. 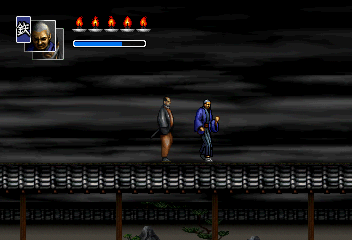 In 1996, however, Hissatsu was thought to have ended for good, and a final movie was produced to bring closure to Mondo’s story, fittingly titled Mondo Dies. Along with it, a video game was also produced – not an adaptation of the film, but an homage to the overarching series, bringing together four of its most popular characters in an old-fashioned side-scroller reminiscent of the Shinobi series.

The main twist is that you get to pick two of them at the start of every level and can then switch between them at will. Each character has a regular attack, and a special attack tied to a gauge that refills as you move. Those are not merely there to get you out of tight spots, but are essential to your progress, so a good strategy is to switch when one character’s gauge gets too low so it can refill while the other fights. The game can get pretty hard later on; as such, it’s essential to create well-rounded teams.

Nakamura Mondo
A master swordsman, his special attack consists of two rapid slashes that create a small wave, instantly killing any regular enemy. He can also perform a continuous series of strikes by pressing the attack button repeatedly. Though he has no long-range option, he’s the best fighter in close-quarters and can hit things below him from the crouching position.

Tetsu
A blind monk, he fights with his left fist, lending an almost beat-’em-up quality to the game. His special is a spiritual wave reminiscent of Ken and Ryu’s famous Hadouken. It has the advantage of traveling through your foes, so it can kill as many as there are on screen. It is very costly, however, and cannot be performed often.

Hide
An acupuncturist who uses poisoned needles to stab his enemies. His regular attack is the weakest in the game, being short of range and requiring three attacks where Mondo and Tetsu need two, but his ability to throw the needles to instantly kill regular enemies is invaluable, especially since it takes so little of his gauge. He also jumps a little higher and further than the others.

Yuji
He uses the string of a shamisen dipped in candle wax to whip his foes in a manner similar to the Castlevania Belmonts. Though it deals little damage, his regular attack is still overpowered due to its long range, its ability to hit multiple enemies at once, and the fact that it cannot be blocked. It’s pretty slow, however, and faster enemies can still overcome him, while its high-and-straight angle of attack makes it awkward in certain situations. He has the worst special of all; it’s just a stronger version of his regular attack, but it hits higher, so that several enemy types will just duck beneath it.

All characters can also block by holding the button after a regular attack. 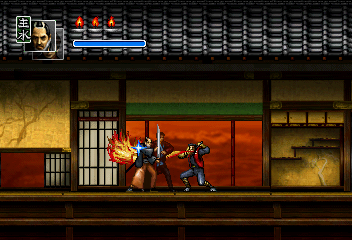 Even fire can be blocked.

The game is divided into five levels, each corresponding to a separate hit job. The story is told in cutscenes composed of still drawings in an odd sort of half-realistic style, along with bits of texts.  Those segments being in Japanese, it’s hard to say what they might be about, but they are short, and they can all be skipped. 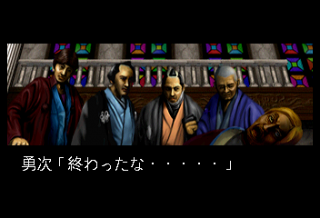 Spoiler alert, if you can read Japanese.

The first two levels are short, straightforward, and frankly, a little dull. It’s during the third level that things pick up, and thankfully, it sets the template for the rest of the game: it’s much larger, with multiple paths to get to the end, and rather than be simply traversed, it must be explored in order to find your target’s hiding place. In a nod to its assassin premise, the first few among said targets are weaklings cowering behind a bodyguard; beat the bodyguard, and you can then walk up to them and slay them in a single hit. 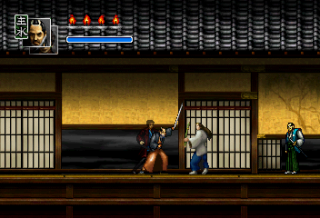 The man in the blue kimono has to go!

A gory little scene follows each level, depending on which character dealt the fatal blow: Mondo cuts them down, Hide plants a needle in their necks, Tetsu crushes their bones with a powerful blow and Yuji hangs them from the ceiling with a shamisen string. During regular gameplay, small splatters of blood also gush forth with every hit. 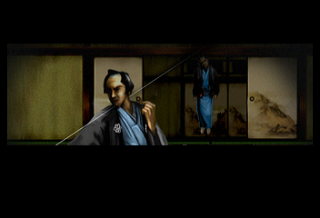 A hero hanging the villain, an uncommon sight in a video game.

Most boss fights are rather simplistic, revolving around simple patterns of blocking and counterattacking. Regular enemies, however, can be very dangerous later on. There are purple ninjas who, if you get too close, divide into three and surround you, and green ninjas that throw projectiles and tend to duck under your attacks or block them a lot; both types will sometimes leave a trap on the ground when they die, which is easy to step on if you’re not careful. In the final stage, a large, European-style castle, medieval gunmen and swordsmen hang out in large groups – it’s much safer to pick them out at a distance. 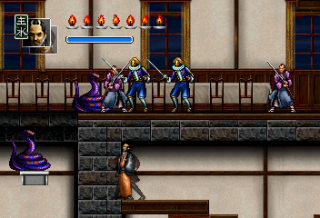 There are platforming segments, too. The mandatory ones are pretty simple, though some alternate paths, particularly those involving climbing the towers in the castle, require more skill. This highlights one of the game’s flaws: though responsive on most occasions, there is a quirk with the controls where inputs will not register in certain circumstances, though it feels like they should. For example, you can attack during a jump, but not immediately after landing; or sometimes jumping will not work if pressed right after or together with a step forward. Playing around these issues is simple enough, but it does take some time to get used to. 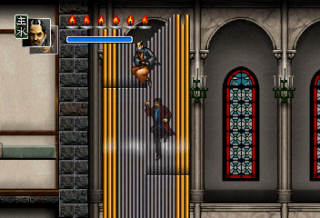 In one of the coolest bits of level design, you jump up an organ’s pipes to the castle’s ceiling.

Visually, the game remains close enough to its general Sega Genesis vibe. Though the realistically-proportioned sprites are slightly unusual, it’s all pretty standard otherwise. The Hissatsu series is also known for its spaghetti western-influenced soundtrack, and most of the game’s music consists of variations on its theme song, full of mournful trumpets and galloping classical guitars. In video game terms, it’s comparable to Wild ARMs, though not quite up to the same level of excellence in either composition or sampling quality. Still, the theme is quite nice. 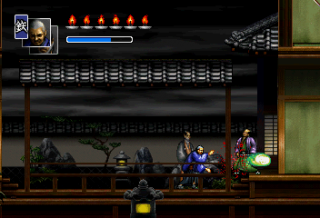 Hissatsu! was only the second video game adaptation of the series, the first being a 1990 Famicom RPG. The show being virtually unknown in the West, both games unsurprisingly remained in Japan. Starting with a 2001 Dreamcast release, a number of pachinko sims were produced, but nothing in more interactive (or interesting) genres. The Saturn game remains well-worth checking out for fans of the Shinobi series or Genesis-era side-scrollers in general.