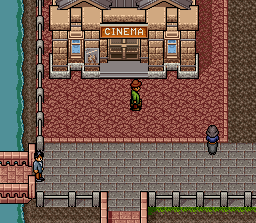 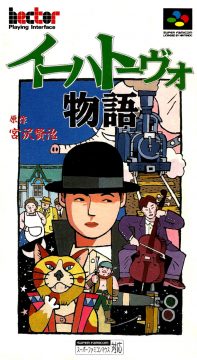 The phenomenon known as “I” is a blue light
coming from a temporary, organic alternative current lamp
(a synthesis of all transparent spirits).
With the landscape and every each of us,
it blinks incessantly, yet never stops glowing:
A light from the karmic alternative current lamp
(the light remains, the lamp vanishes).
– “Spring and Asura” Preface

This puzzling quote is what displays on your screen when you start Ihatovo Monogatari. Released in 1993 on the Super Famicom, it’s actually a bit hard to figure out why it’s so poetic as the game was developed and published by a studio called Hector, a small Japanese development team specializing in the production of generic simulation games that went bankrupt in 2002 and was instantly forgotten by history. Before the release of the mysterious game in question, the company proved to be quite a card by producing a Famicom government simulation titled America Daitouryou Senkyo, priced at ¥9,800 (almost twice the regular price of Famicom games). And this was amidst a sea of random golf, casino and board games. However, in spite of these getting-nowhere-fast adventures, the first miracle happened in 1992 with the release of Moon Crystal, a Famicom platformer with polished animation (it wasn’t localized due to its late release, but a patch does exist). Was this unexpected game a prefiguration to Ihatovo Monogatari? In any case, some guy in Hector’s staff managed to bring the project to the table. A project whose art direction is of a mind-boggling level considering Hector’s past experiences. But there is bad news, even though you probably expected this: this game, which is already pretty obscure to begin with, was never released outside of Japan, though a fan translation was released in 2018 to make it playable for English speakers.

After a mysterious cut-scene bathed in mellow music, you wind up in a station. You have absolutely no information about who you are, nor where you are for that matter. You then leave the platform, for lack of any other path to follow. Once outside, you lay foot on the game’s main place: Welcome to Ihatovo Town! You are now standing there, firmly holding on to the case you’ll walk around with for the whole game. One question is brought to your mind: What to do?

This game was sold and labeled everywhere as an RPG – but it’s nothing like an RPG! Absolutely nothing like one. Indeed, it’s a pure adventure game: no battles nor upgrades whatsoever, and no game over of any kind; even the inventory is rudimentary. You can’t make anything clearer than Ihatovo Monogatari’s gameplay: You just move around, talk to people, check your surroundings, and these interactions may trigger events. The progression is based upon an antechamber structure, namely with Ihatovo Town as its center: You first trigger the needed events in the town, which will in turn unlock a new place that can be accessed through the world map displayed once you wander outside the bounds of the city. You then start the process again in the newly accessed zone (with the addition of a few items), and this continues until you get one of the 7 books the protagonist seeks. Here the chapter ends, and you’re sent back to Ihatovo Town to start a new chapter. That’s it, pure and simple. The entire game plays that way. Zones accessed in previous chapters even become inaccessible as soon as their chapters are completed. You also can’t “miss” anything in this game. Furthermore, the game will only take a few hours to complete.

But what’s point, then? Why bother play a Japan-only game lost in the depths of Akihabara second-hand stores if it’s so… unoriginal? Well, first, the game’s progression curve. There is no denying its linearity, but it’s actually handled pretty well and the game world is designed in a way so that a feeling of freedom is still experienced by the player. Of course, the game still plays in a straight line, but it’s a bit like if we really were “playing” a novel, wandering around the roads of a story that was already written. A special mention must go to Ihatovo Town, as it’s actually vast and populated, and walking around its streets is rather pleasant. In the end, the game’s linearity isn’t really a flaw, but rather a property that forms an integral part of its progression system. 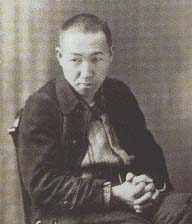 OK, maybe so far it doesn’t too interesting. But the art direction is is the heart of the game! Indeed, Ihatovo Monogatari‘s background is inspired by a Japanese writer and poet’s universe, and not just any writer – Kenji Miyazawa. You may not have heard of him, but he’s very well known and renowned in his native country. You may have seen Isao Takahata’s 1982 anime movie Gauche the Cellist, though. Well, know that it’s based on a Miyazawa short story! This writer had developed a distinctive and personal style by drawing inspiration from his own life. Born in a well-off family of pawnbrokers that made profit from interest-bearing loans given to poor peasants of the surrounding countryside, he soon felt disgusted by the family business and committed himself against rural misery. His writings are influenced by proletarian literature and romanticism as well as magical realism and, above all, Buddhism (the intro quote is a good example). Incidentally, “Ihatovo” is an Esperanto neologictoponym created by Miyazawa to refer to an imaginary land inspired by his natal Iwate. The writer’s universe is widely featured in the game, with characters and places coming from a variety of his short stories like The Fire Seashell, The Cairo Leader, Ozbel and the Elephant, The Biography of Guskor Budori, The Cat’s Office, Night on the Galactic Railroad and even Gauche the Cellist.

However, a vital aspect of the game seems to have been left out by the art direction: the visuals. Don’t misunderstand, this game isn’t ugly; far from it, it’s actually nice! But after reading Night on the Galactic Railroad, one may expect something more daring and wild than just “nice” visuals. A dreamy, surrealistic imagery fleets through all of Miyazawa’s works; it’s a bit sad they didn’t go as far for the graphics as they did for the poetic influence, as it could have been a huge plus that would have boosted the game’s aesthetic achievements. The good news is, the soundtrack kind of makes it up for it! Composed by Tsukasa Tawada, who hadn’t worked on anything serious at the time (apart from the Famicom version of Maniac Mansion), it’s absolutely enchanting. Indeed, a lot of work went into it, as much for composition itself (the intro theme, “Ihatovo Praise”, is splendorous) as for sound design; the instruments really sound like they come from a customized orchestra that was specially made for the game. Besides, it seems Tawada’s talent wasn’t ignored, as he was hired by Enix afterwards to work as a sound designer for the Dragon Quest series (III and IV remakes as well as episodes VI and VII) and then solicited by Nintendo to work on Pokémon spin-off’s (Coliseum, XD, Trozei and Battle Revolution). So, if the game remains an aesthetical success, one can be a little upset by its lack of a visual audacity that could have made it downright fantastical. It’s definitely a beautiful experience that you should consider trying if you’re curious!