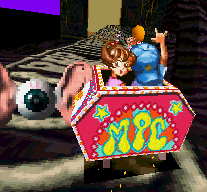 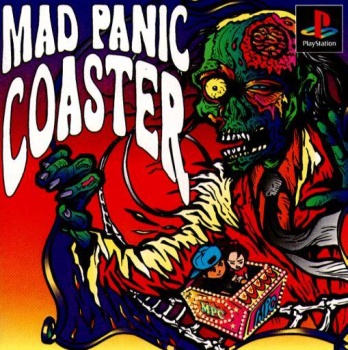 Remember the mine cart riding level from Donkey Kong 64? Imagine that as a whole game. Now imagine it going incredibly fast. That’s basically Mad Panic Coaster in a nutshell. 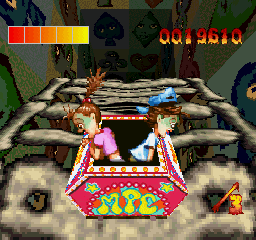 In Mad Panic Coaster, you control two elementary school students, Bakuyan and Kyako, as they try to survive a ride on 15 hellish roller coasters. The premise is that these tracks were designed by a crazed man named Dr. Jones, who became some sort of bio-mutant, and worked for years to create the best roller coaster in the world. Since these were designed by an insane person, they obviously weren’t subject to any safety testing, and they don’t have any rails or barriers of any sort. It’s up to you to steer the roller coaster car using the D-pad to make sure it stays on the track. The roller coasters also have various monsters, traps, and jumps to avoid. In addition to jumping over gaps, hitting Square will make the girl throw some sort of yellow ball projectile that explodes at a long range, while hitting Circle will make the boy throw that same type of projectile at a shorter range. Falling off the track or getting hit by something will cost you health, and once you run out, you must start the level all over again. Once you make three laps around the track, a rainbow with the words “lucky” form around you as the car comes to a stop, and you move on to the next level. Every three roller coasters, a boss will be fought after completing the third lap. This boss is similar to the regular enemies, except that they take many more hits to kill. To defeat them, you either throw enough projectiles at them or survive another three laps. 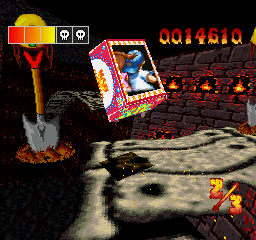 The levels take you through a plethora of locations, ranging from scary castles to the ocean to Wonderland to the inner cities. Each roller coaster has its own unique enemies, and while the game may move too fast for you to see these enemies in close detail, pausing can show that a lot of work went into these details. Most of the game is constructed out of polygons, but the boy and girl are sprites, allowing them to appear more expressive than PS1-era polygonal characters would typically allow. The music, while slightly limited in terms of variety, is fitting for what goes on in the game, consisting mainly of instrumental thrash metal and hardcore punk tracks.

Mad Panic Coaster goes incredibly fast, capturing the thrilling sense of an amusement ride, but sometimes too fast for its own good. You barely have any time to react to half of what’s going on, and just mashing the attack buttons can sometimes be the best strategy. When there’s a jump coming up, it’s usually signaled by a few rows of guitars along the track. While this is fine for the first few levels, eventually the guitars go by so quickly that you may not even notice them. Something more visible like a red triangle with an exclamation mark would probably have been better signal. You will also die an excruciating amount of times, at least until you’ve memorized the tracks well enough to conquer them. 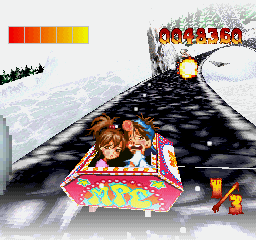 Mad Panic Coaster feels like it was meant to be an arcade game, like one of those motion simulator cabinets. The fact that the difficultly ramps up to absurd levels by the end, culminating in a bullet sponge boss fight and a disappointing ending with the two heroes at the beach, and the way it considers health and continues, it may have been designed that way. To that extent, Mad Panic Coaster isn’t the sort of game you can sit down and play for any significant amount of time, but there is an appeal to all the crazy action that goes on, and there isn’t really anything that’s quite as thrillingly insane. 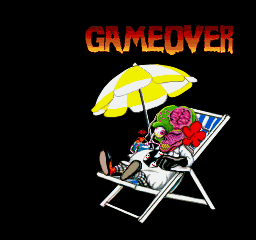 The game was published by Hakuhodo in 1997, an advertising agency in Japan whose only other game is the RPG Himikoden: Renge. The developer of this game is unknown, as the only company shown before the intro screen is Hakuhodo. However, given that Himikogen: Renge was developed by Chime Corporation, it is unlikely that Hakuhodo actually developed Mad Panic Coaster.