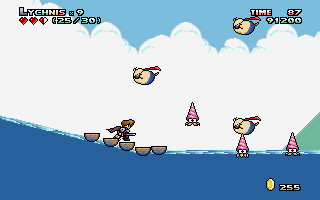 Developed and released exclusively in South Korea during the DOS heydays, Lychnis is a 2D platformer, and a very average one at that. It stars the courageous knight Lychnis and the tomboyish mage Iris, on their way to save the fantasy land from clutches of the overlord Sakiski. It also bears some very uncanny semblance to Mario games, specifically Super Mario World from four years prior, from aromatic aesthetics to familiar enemy design to the shape of rigid slopes. This kind of imitation wasn’t uncommon in Korea, where most developers at the time focused their development on the computers, usually copying something popular on consoles and then selling it to those who couldn’t afford them.

It doesn’t quite control like a Mario game, though. You tackle the game as either Lychnis or Iris – Lychnis wields a sword as his weapon, while Iris shoots energy balls from her staff, which have longer range but snaps slower than the sword. She can also do a double jump, while Lychnis does a wall kick instead. Both are very handy maneuver as this game doesn’t let you change the direction in mid-air. For unclear reason, Lychnis is the only character who can take on bonus stages, in which he has to complete platforming challenges. 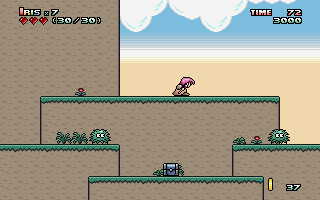 The game starts off in forest area, and generally it doesn’t stray too far from usual platforming ensemble – ice world has penguins, water world has marine creatures, fire world has volcanoes that spout out harmful rocks (something later introduced to the plumber’s games in the NSMB series), castle world has Raiders of the Lost Ark-esque rolling boulders, and so on. A few levels directly reference gimmicks from Super Mario World, such as autoscrolling stages and the raft ride. Hidden inside levels are cards that grant access to secret shop, which sells equipment and health potions to aid your journey. It’s not a terribly long game overall, with only 15 levels.

Though the basics in Lychnis are fine, there’re many issues that make it less than enjoyable. The biggest problem is that the level design is very uneven. Some levels are padded out with convoluted obstacles that like to test your patience, while others are so simple that they can be completed around one or two minute. The quality takes a nosedive in the last several levels, which can only be described as some barren corridors with randomly placed enemies. A few levels add alternative paths, but exploring them is often an annoyance than a reward of its own, as they actually teleport you back to previous points of the level. Bottomless pits are commonplace, and since your character tends to bounce off backward whenever they touch anything harmful, there’re too many occasions where a single hit can easily send you to death.

On the bright side, there’re a few nice touch. The game opens up with animated cinema, which shows off some nice artwork of main cast. When you pick your character at the beginning, the one not chosen will sneer at the other, as if having to save the world is a minor inconvenience to them. Similarly, even though most enemies are pretty small, which look awfully tiny on VGA display, how they’re making silly face when knocked out is cute to look at. The game could’ve used more of detail like this.

Its only boss fight is the penultimate battle against Sakiski, which is also a weird one to be put in a platformer. You need to take him down in 1-on-1 fight, but this is done from matching images in a slot machine game, whose result decides whether your attack will successfully land on him. The roulettes run so fast that you barely have control over them, and Sakiski takes tons of damage before he eventually goes down, so some luck is definitely required here. Needless to say, it doesn’t really fit to a game like this, and it may ruin the entire run unless the player have saved enough money and purchased the best armors available to defend oneself from his deadly spell.

On surface, Lychnis emulates the feels of Nintendo platformers, but it’s missing personality and meticulous design of their games. Plus, part of it seems just unfinished – if you look at the map, there’re big red beacons the game simply skips, implying something big was planned in the development before they were cut. It’s easily bested by the same year’s Jazz Jackrabbit. Still, it’s technologically impressive to see a DOS platformer that runs closely to console games, with smooth scrolling, responsive controls, and bright graphics. 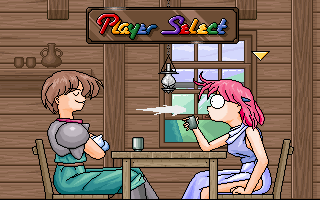 Lychnis is less known for itself and more for that it was a career starting point for many veteran Korean developers. The game was a commercial debut for both company involved, Gravity and Softmax; the former grew into an MMORPG farm years later, starting from their cash cow Ragnarok Online, while the latter would focus on darker, edgier RPGs like War of Genesis and Magna Carta. Likewise, a number of staffs that worked on this game ended up getting their own company in the 21st century. Lastly, its music was contributed by the musician group SoundTeMP, one of their first works alongside Mantra’s Ys II remake. Their score in Lychnis is thoroughly mediocre, but they’d go on creating some of the most memorable soundtrack ever heard in Korea, demonstrating their mastery over different genres for games like Fortress 2 Blue and Talesweaver.