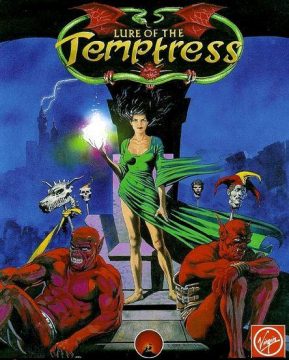 The city of Turnvale has been invaded by an orc-like race called the Skorl, who are led by a cryptically gorgeous enchantress named Selena. The royals have been slain or captured, and caught amongst the chaos is a peasant named Diermot, the player character. After escaping from prison with the help of a court jester named Ratpouch, the unlikely duo is tasked with bringing together the town’s resistance movement and driving out the horrible creatures that have overrun their city. 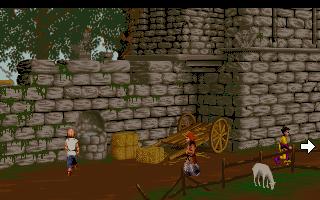 Lure of the Temptress is the first game developed by Revolution Software, who would later go on to bigger and better things with the Broken Sword series. Everyone has to start somewhere, of course, and their first product is almost more of a tech demo than an actual game. It’s the inception of their Virtual Theater engine, which allows for the many NPCs to wander freely around town, entirely separate from the actions of the player. It does a fine job of creating a bustling, living town, yes, but it’s a pain when you find someone specific to talk to, which either means bumbling around until you bump into them, or finding a place they frequent and hanging out for a bit. The repetitive, labyrinthine nature of Turnvale doesn’t help matters, as it’s easy to get lost until you’ve got a grip on the layout. But this is all pretty much the entirety of your quest – finding people, talking to them, trading items, and occasionally using them in some way to solve a simple puzzle. Technically it’s not a long game, but all of this stalking pads it out considerably. A majority of the game takes place in the city, too, leaving this adventure feeling strangely constricted, and the generic medieval setting does little to liven up things up.

While interesting from a technological standpoint, beneath the surface, the Virtual Theater engine just doesn’t work very well. One of its most prominent elements is the ability to order Ratpouch to carry about various commands, as his skills are needed for certain tasks, like pushing bricks or picking locks. He’ll usually follow you around, but you can also tell him to walk to anywhere in town, and off he’ll go. You can string together several verbs and nouns into relatively complicated sentences and watch him carry them out. This is all in theory, of course. In reality, the sketchy pathfinding and erratic movement of the other NPCs create situations wherein everyone bumps into each other chaotically until they all forget what they were supposed to be doing. Other townspeople constantly get in your way, causing your character to stop, and lots of secondary conversations happen directly over your dialogues, devolving many situations into massively cluttered headaches. 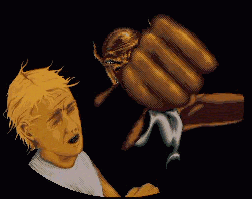 At least the game’s got a good sense of humor. The animated cinema of the Skorl punching poor Diermot right in the face is a never ending source of amusement. And while Ratpouch isn’t the swiftest of companions, he’s willing to chime in with goofy non sequiturs (“I’ve never trusted blacksmiths, not since my sister went to have her teeth pulled.”) and stupid jokes (“What do you give a Skorl with diarrhea? Plenty of room!”) He’ll occasionally egg you on to drop this whole questing bit and just go get wasted, or have an elaborate conversation with a dimwitted barbarian about his lifestyle choice. Some other dialogues amuse – watch as a Skorl wanders into a restaurant and causes a scene when he learns they are all out of squirrels – but such scenes are the only savior in an otherwise incredibly dull adventure.