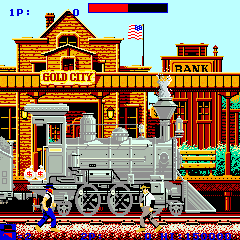 Video games where a character walks across the screen beating up anyone that gets in their way are nothing new, beat-em-ups are among the most prolific types of game one can find. But in the years before the massive popularity of Technos’ Double Dragon and Capcom’s Final Fight would codify the “rules” and structure of the genre for the next decade, Data East had a few breakthroughs of their own. Soon after effectively creating the fighting game genre with Karate Champ in 1984, we would also see them take a major stride into beat-em-up territory with Express Raider.

The premise is simple. Contrary to most beat-em-ups, the player is not off to save the world, rescue their kidnapped beloved, thwart the designs of corrupt politicians, or even avenge the death of a family member. Instead, there’s only one goal in Express Raider, and that’s to steal as much money as possible from every train in the wild west. 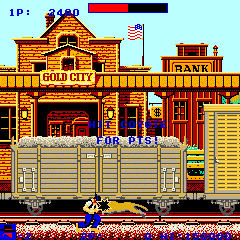 Express Raider has a lot going on in it that keeps it unique despite looking simplistic on the surface. Most interestingly, the game’s controls make it a clear transitional step from the action in Karate Champ to Data East’s later massive arcade hit, Bad Dudes vs. Dragon Ninja. Each of the game’s infinite levels are broken into three sections. The first involves our intrepid raider having to quickly punch out a train conductor and board the level’s locomotive. After that the player gets to brawl their way from the back of the train to the engine (where several large money bags are stored). The final part of each level is a daring chase against another train while on horseback. A new (and very nice looking) large sprite of the raider atop his horse is used for these scenes, and provide some simple but addictive shooting action thanks to the various cartoony opponents popping out of each train car, and cheese ball western flick music. Players can also avoid incoming projectiles by leaning to one side of their horse.

These fun shooting sections make for a nice graphical showcase, and each level opening with the raider having to actually board the train is a nice detail (and like Karate Champ, it offers the opportunity for bonus points by punching out some wild animals). The real meat of the game, however, takes place on the trains proper. Here players get to pick their way across the top of each car, fighting a variety of opponents along the way. Karate Champ fans will find the controls familiar in these segments. Players can use the joystick to jump and move around, but also to direct a variety of punches and kicks when used in conjunction with the game’s one button. It’s all surprisingly merciful by early 80s arcade standards. Instead of being knocked out by a single enemy attack, the game has a half-full health gauge at the top of the screen… that actually increases every time the player successfully strikes an enemy!

This is genius. The tug-of-war created here encourages players to experiment with the raider’s various moves to keep closing in on and efficiently eliminating each enemy. It’s a legitimately incredible way to create a sense of urgency complemented by making one’s way across a fast moving train. Express Raider and the few other games using this style of health bar are now long forgotten. 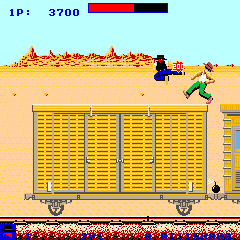 On top of that, players going for a high score will also want to pay attention to the raider’s versatile fisticuffs. You receive more points for hitting enemies with riskier moves, another way to encourage players to quickly close the gap between enemies. The game also rewards this with its checkpoint system. Instead of having to retake every train from the beginning of the stage, when you lose a life, the action restarts at the same car you were defeated on. This makes every opponent beaten and car jumped across feel like an accomplishment.

Express Raider carves a unique niche for itself, foretelling a change in arcade game design where getting the high score was gradually starting to matter less to the average arcade goer, in the face of wanting to see fantastical graphics and large, colorful character sprites. It satisfies both by having a bright and endearing look to it while still maintaining a scoring system that favors skilled play. That its primary action scenes are also the basis for what would be one of Data East’s most popular games, Bad Dudes, makes it even more impressive.

The game also has a final, more lethal way to add a sense of urgency to the proceedings. In later stages (or earlier, depending on the greed of the arcade operator’s preferred dip switch settings), Express Raider provides an increase in difficulty not just with more durable enemies, but with an explosive placed on the couplings between each train car. There’s a time limit now, and you’ll often have to make some daring, last second leaps from one car to the next just to stay alive if an opponent isn’t beaten before each explosive detonates. 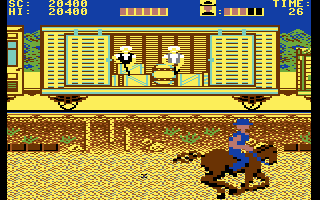 Express Raider was popular enough to get ported to the Commodore 64, ZX Spectrum, and Amstrad CPC (via U.S. Gold). The people responsible for these ports – Melinda Légradi, Paul Zsadanyi, Zoltan Farkas, Istvan Ratkai, etc. – will be unfamiliar to Data East fans, as these conversions are the only games any of them have ever worked on. Even so, Express Raider remains fun on home computer systems.

All things considered, the Amstrad CPC version is better at capturing the feel of the arcade. While a quick screen wipe takes us from car to car instead of the smooth scrolling of the original, the CPC gives us much nicer colors than the C64 version, and also maintains the arcade’s extra layer of parallax scrolling in its backgrounds. The C64 conversion is still good, but the colors are murky and indistinct. It also features a few oddly proportioned enemies, often appearing almost as tall as the train cars they emerge from. The ZX Spectrum version uses the uncolored, outlined sprites the system is known for while still maintaining a color palette as bright (if not as varied) as the CPC version.

Fortunately, in 2010 the Wii and PlayStation Network were treated to the release of a few classic Data East games, and a perfect arcade port of Express Raider is among them. This is the best way for new players to experience this rather fun game. 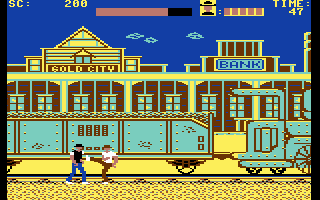 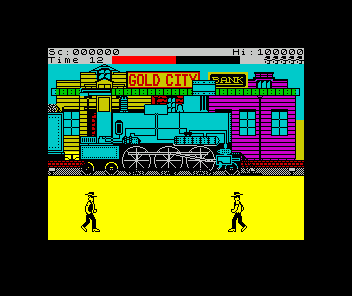