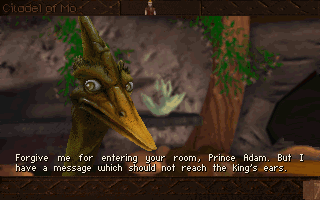 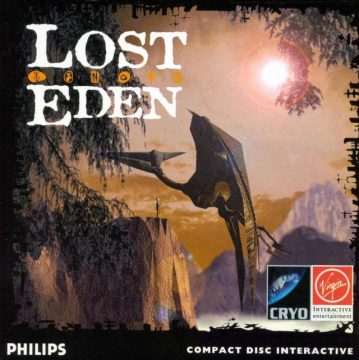 Released in early 1995, Lost Eden is an adventure game by Cryo (makers of the incredible Dune; the quasi-adventure game, not the real time strategy title by Westwood), with input from famed Fighting Fantasy Gamebooks author and Lionhead co-founder Steve Jackson. It has a strong emphasis on computer generated visuals and was released for numerous platforms.

The story revolves around silent protagonist Adam in an alternate reality Earth called Eden (later on you meet a woman called Eve). It’s a world where sentient dinosaurs live alongside tribes of humans and apemen. All are being wiped out by the evil Moorkus Rex and his army of tyrannical Tyrannosaurus (called Tyranns – get it?). It wasn’t always like this though: Adam’s great-grandfather, Priam, had built giant citadels to keep the Tyranns at bay. Unfortunately his son, Vangor, was hungry for power and so destroyed the citadels (save one which has become their home), along with the knowledge of how to construct them. Next in line to the throne was Adam’s father, Gregor, who in the game is a feeble old man afraid of conflict. Adam now carries the sins of his forefathers, but is determined to stop Moorkus Rex. He realizes that to do this he must rediscover how Priam built the ancient citadels – and the first part of the game is some rudimentary puzzle solving whereupon you end up in the remaining Citadel’s basement to find that dinosaurs worked together with humans in the past, with Priam commanding them to build citadels via a magical flute. So off Adam goes to unite the land. 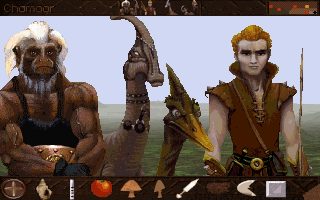 Anyone familiar with Dune may see some slight similarities here, though Lost Eden doesn’t include any kind of strategy elements like Dune had. Once outside of Adam’s home Citadel, which plays like a stereotypical adventure for 20 minutes, the game shifts to a series of five maps you need to unlock. Each is made from a grid measuring 4 by 12 for a total of 48 positions, each represented by a static CG landscape image. You click the cursor to move in one of four compass directions and the CG image changes. Those set over water can’t be accessed, so some maps have closer to 40 positions, and certain areas such as beaches and forests will have items (gold, apples, mushrooms, bird nests) which need to be collected ad nauseam.

This forms the bulk of the game – you randomly wander the maps (actually, astute players should start in one corner and systematically travel in horizontal lines) collecting items while on occasion bumping into dinosaurs and humanoids. The humanoids tend to be in fixed locations, but the dinosaurs move around randomly and there’s no way to tell where they are, so you need to scan all 48 positions, sometimes repeatedly. You feed the brontosaurus mushrooms and then play a flute, after which they start building a citadel. Later on raptors must be given gold to fight the Tyranns, and triceratops given bird nests to strengthen the citadels. Apples must be dropped in a body of water to lure a dinosaur that reveals which special weapon must be used in that area (these weapons are acquired as part of the story later).

Exploration is reminiscent of Myst, but whereas Myst had fantastical CG locations, Lost Eden’s are a series of generic, poorly rendered landscapes, none of which have any bearing on the gameplay. It’s akin to playing hide-and-seek using a deck of playing cards, but not the fun kind with bare naked ladies on them, rather the kind with pictures of nondescript lawns.

How much influence Steve Jackson had is debatable (the credits say “special participation of”), but this what he said in the manual:

“These days the quest is on for the ultimate Adventure Game – the Interactive Movie. In this respect, Lost Eden is something of a milestone. Cryo’s painstaking design and programming work has created nothing short of an Adventure Gaming masterpiece. The action is full-screen. The animations are stunningly realistic. Game control – the Interface – is unobtrusive. And in no other game that I have played have the game characters been developed so carefully. The result is an Adventure Game with a unique feel to it. [… ] I have thoroughly enjoyed being involved with its development. And I’m sure you will share my enthusiasm when you immerse yourself in the adventure plot.”

The majority of what he says is demonstrably incorrect. For starters, the joints of some dinosaurs are stunningly unrealistic in the CG videos, and almost throughout the game feels unfinished. A seasoned and determined adventurer could easily complete it in less than a Sunday. The Shell of Tau gives clues to the few puzzles which exist, none of which are remotely taxing (the best is a three question quiz, where the answers are quite obviously items representing the sun, moon and earth). Otherwise there are no dialogue trees, making conversations brief and linear. For the most part you’ll be collecting mushrooms and gold to start citadels, occasionally being given a key item once completed, until near the end where you’re tasked with traipsing back over all the maps to find triceratops.

All of the game’s challenge comes from randomization and sheer luck during exploration. A key item, the Sun Stone, is hidden in a cave in the upper left of one map – there’s never a clue you need to visit this area, but considering that the dinosaurs move randomly, the easiest way to progress is to explore every single area. There’s an inevitability to the game, where not only can you not lose, but winning doesn’t require much thought. Which is unfortunate, since it had great potential. Lost Eden’s strongest points are how utterly balls-to-wall strange it is and the ingenious music throughout (it has an ethnic vibe to it, with tribal chants and cries). Characters are bizarre (one tribe look like Maori heads, others appear made of shell), the ever-present CG is of a surreal quality found only in games from the early ‘80s, and all the dialogue replete with absurd fantasy names is voiced with absolute seriousness. Steve Jackson is correct in saying the game’s premise and atmosphere is unique, but the actual gameplay seems determined to prevent you from enjoying it. Those curious of Cryo’s ability are better off seeking out KGB or Dune; Lost Eden is merely a strange curio. It is, at least, infinitely more interesting the incredibly drab Dragon Lore, released the year prior and at least a fair stretch better than the middling CG adventure game affairs that typified Cryo’s output until their closure in 2002.

Under a Killing Moon
Night mode