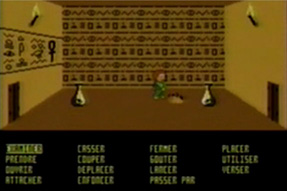 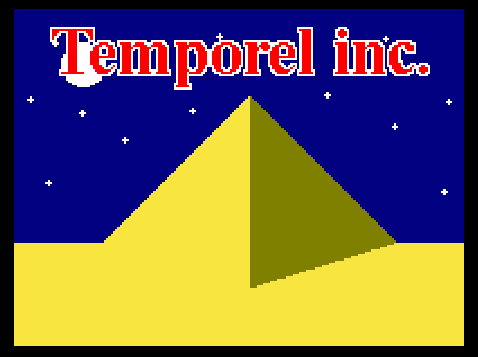 As streaming services continue overtaking physical media, the idea that a video game may vanish entirely once it or its platform is no longer supported has become a very real fear among classic gaming enthusiasts. This is already true of countless games created for old, obsolete mobile phone platforms, pulled from marketplaces before anyone cared to archive them.

But this isn’t a new phenomenon. While most games released in the previous decades are still playable throughs ports or emulation, the ’80s and ’90s also saw gaming platforms that eschewed physical supports for games and the ownership they imply, leaving their libraries to disappear along with the services through which they were once available.

Such is the case of the Videoway (or Vidéoway), a subscription-based, interactive television service launched by the Quebec-based cable distributor Videotron in 1989. Billed as the first of its kind in North America, and also distributed in parts of the UK, the Videoway service and its dedicated terminal granted access to premium tv content, while also serving as a sort of primitive Internet and video game console, as the terminal contained a custom-built 8-bit computer. Users could consult weather forecasts, pay bills, access entertainment news, send messages to other users, or even participate in a dating service, with the information being transmitted through the TV cable rather than a phone line through a Canadian variant of the Videotex technology. Likewise, the games were downloaded to the terminal’s RAM every time you picked them from the menu, and deleted when you were done.

There were card games and board games like poker, blackjack, or parcheesi. There were ports of early ’80s arcade or computer titles like Q*Bert, Burger Time, or Mr. Chin, an otherwise Japan-exclusive MSX title by future Kirby-creators HAL Laboratory, in which a Chinese restaurant cook / dubious stereotype tries to keep plates balanced on top of various poles. A fan-favorite was the suprisingly fun bowling simulation, fittingly titled Bowling. 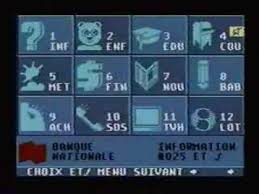 To promote this aspect of the Videoway, Videotron created the Masters Club (Club des Maitres), through which players could be awarded ranks from “Apprentice” to “Grand Master” by reaching high scores in select Videoway games, as well as a low-budget TV show where teams of kids would compete at said games and others in order to earn prizes. At the peak of its popularity, in the early ’90s, the Videoway had a user base of about 180,000. 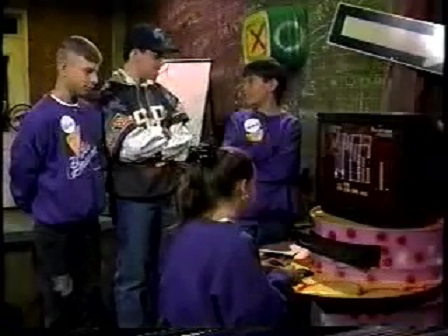 One of the hosts of Les Branchés interviewing
a Videoway Grand Master / small child, 1992.

The most complex of its games, however, was an original title by the name of Temporel inc. Conceived by a small team of programmers at Loto-Québec, a government-run corporation in charge of casinos, lotteries, and video poker machines, Temporel was a time-traveling adventure game taking place entirely within an Egyptian pyramid. While originally developed in French, an English-language version was also available in England at the time, and possibly along the Canadian East Coast as well.

Unfortunately, as of this writing, there is no way to play the original game. Due to their method of distribution, none of the Videoway games have been preserved, and as far as anyone knows, the original code is either lost or stored away in a vault somewhere. For this reason, efforts at creating a Videoway emulator have proven fruitless.

But there is a twist. Using an old playthrough of the entire game recorded on a VHS tape, a longtime fan re-created Temporel as a Flash game in 2015. While this remake is only available in French, a separate, dual-language remake is also being developed for the NES and Colecovision, set to be released as a physical cartridge under the title of Dead Tomb. 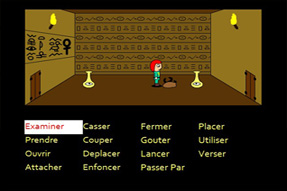 So what is it all about? Well, as an employee of the titular Temporel, inc. in the year 3014, you are tasked with traveling to the Egypt of 13,000 years ago in order to study the last ice age. Unfortunately, due to lax maintenance, your space-and-time-travelling ship encounters technical difficulties along the way, forcing you to land on top of a pyramid. You’re just one diamond-based power generator short of completing your repairs when the pharaoh’s soldiers surprise you, knocking you out and leaving you trapped in a room at the bottom of the pyramid. Your goal, then, is to make it back to the top, and hopefully find a diamond along the way to power your ship with.

The game is not quite a point-and-click adventure, though it looks like one. There is no cursor; instead, the player moves the character around using the arrows on the remote, and interacts with whatever object it may be facing through options in a menu. And while early point-n-click games like The Secret of Monkey Island have been criticized for having too many useless (or rarely useful) options available, Temporel has even more. Let’s say you enter a room and find a rock in the middle. Not only can you Pick it up or try to Use it, maybe On another item, but you may also try to Move it, Throw it, Break it, Attach it (to something), Place it, Taste it, Pour it, etc. Once you’ve settled on what you will do and how, you need to confirm your choice again for it to actually happen. It’s a cumbersome system that could have easily been streamlined had the developers not been so concerned with providing accurate verb choices for every possible situation, and it means that the familiar routine of simply trying out every possible option whenever you get stuck becomes particularly tedious. Thankfully, the puzzles are mostly logical, at least by video game standards, but they do require a lot of back-and-forth between the different rooms as you rarely have the right item in your inventory to trigger what needs to be triggered when you first encounter some suspicious place or object. 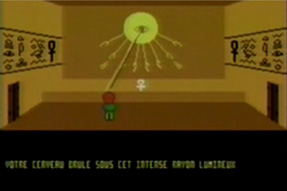 Outside of the rooms where the puzzles are found, you navigate your way through the pyramids’s corridors as a circle of light in the dark, stumbling around for the next room; in the remake, this has been made easier as you can now see your little sprite and the area around him clearly. While the game can be completed in less than an hour once you know what to do, it’ll take several more to figure out all the puzzles and make it to the end on your own. As the Videoway lacked a save function, the game uses a password system.

Most Videoway games tend to look like what you’d find on the Colecovision or MSX computer. While the different rooms tend to look very similar, this is easily the best-looking game on the system, roughly on par with a NES title. The remake only has one song playing throughout, while the original game had no music. 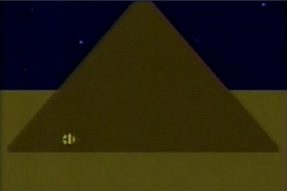 This is what the game looks like in between rooms.

Many game studios operate out of Montreal and Quebec City now, from divisions of huge companies like Ubisoft and EA to indie units like Sabotage Studios of The Messenger fame. In the early ’90s, however, there was no game industry in Quebec. Thus Temporel stands as a true curiosity, a commercial video game developed in a place where there was no such thing as a professional game developer, for a Videotex service/8-bit console that worked (almost) like Google’s Stadia 30 years before its time – and perhaps the Stadia’s time hasn’t come quite yet, either. Under the circumstances, it’s really not half bad; fans of old adventure games, who may not mind things such as arcane, cluttered interfaces, might get some fun out of it.

Though the Videoway went out of vogue somewhere in the ’90s, it wasn’t officially discontinued until 2006, by which point Temporel and its simple, early ’80s-style arcade game counterparts were already nostalgic for those who’d grown up with the service. Today, however, this nostalgia can only be experienced through a handful of old videos and a couple of fan remakes.

http://www.temporel-inc.com/ – Homepage of the free remake, and source of the original game screenshots.

https://www.youtube.com/watch?v=XqY2gZld2xg – A preview of the upcoming Dead Tomb for the NES.