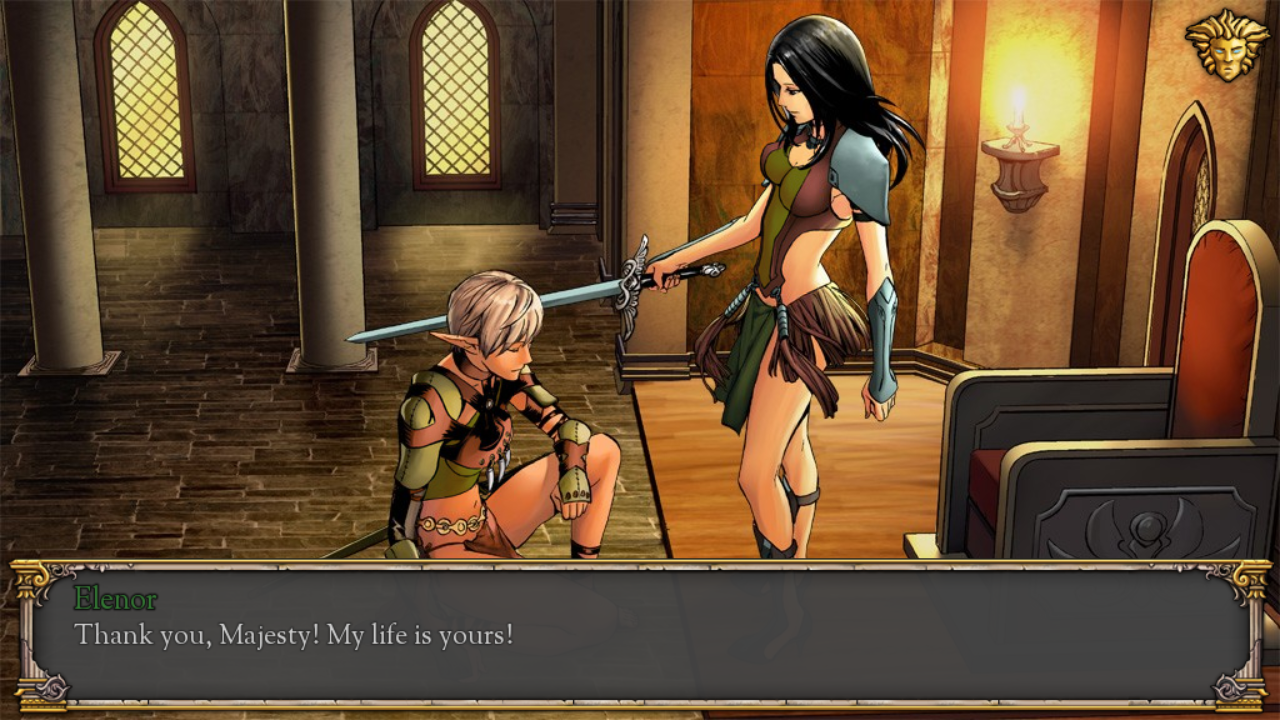 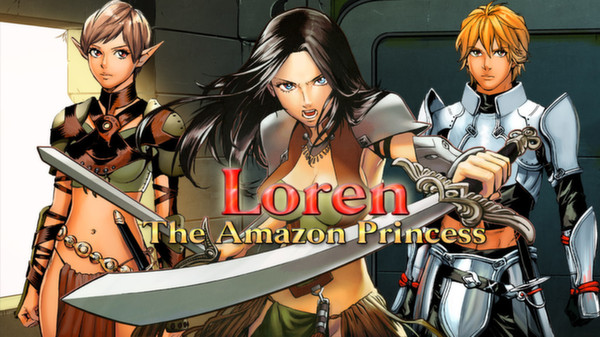 Visual Novels traditionally have been an inherently Japanese genre. Only fairly recently they gained popularity among American creators, so you may be surprised to read that an Italian designer has thrown his hat into the genre as well. Riva Celso has been making games since 2003, and his Winter Wolves group works mainly within the realms of visual novels. The group is somewhat infamous for their high output with wildly varying quality, but Loren the Amazon Princess is definitely one of their better releases. The game is a cross between visual novel and RPG, and it manages to string quite the tale, even if it doesn’t stray too far from the classic fantasy formula, at least initially. With the expansion, The Castle of N’mar, the game becomes somewhat subversive to what the plain version says and implies.

The game is set in the land of Aravorn, where the princess of the Amazons, Loren, finds that her mother has gone missing. From here, you journey alongside her as a slave, either the male human Saren or the female elf Elenor, gifted with powerful healing magic and your choice of warrior or thief class. The starting goal is to find Loren’s mother, but the story quickly becomes more complicated as it is revealed that demons being lead by a mysterious armored man named Fost are trying to start a war between humans and elves. Loren finds a sacred blade during the first chapter and becomes the hero that will save the world… or so she would if she fully realized the importance of the blade from the start. 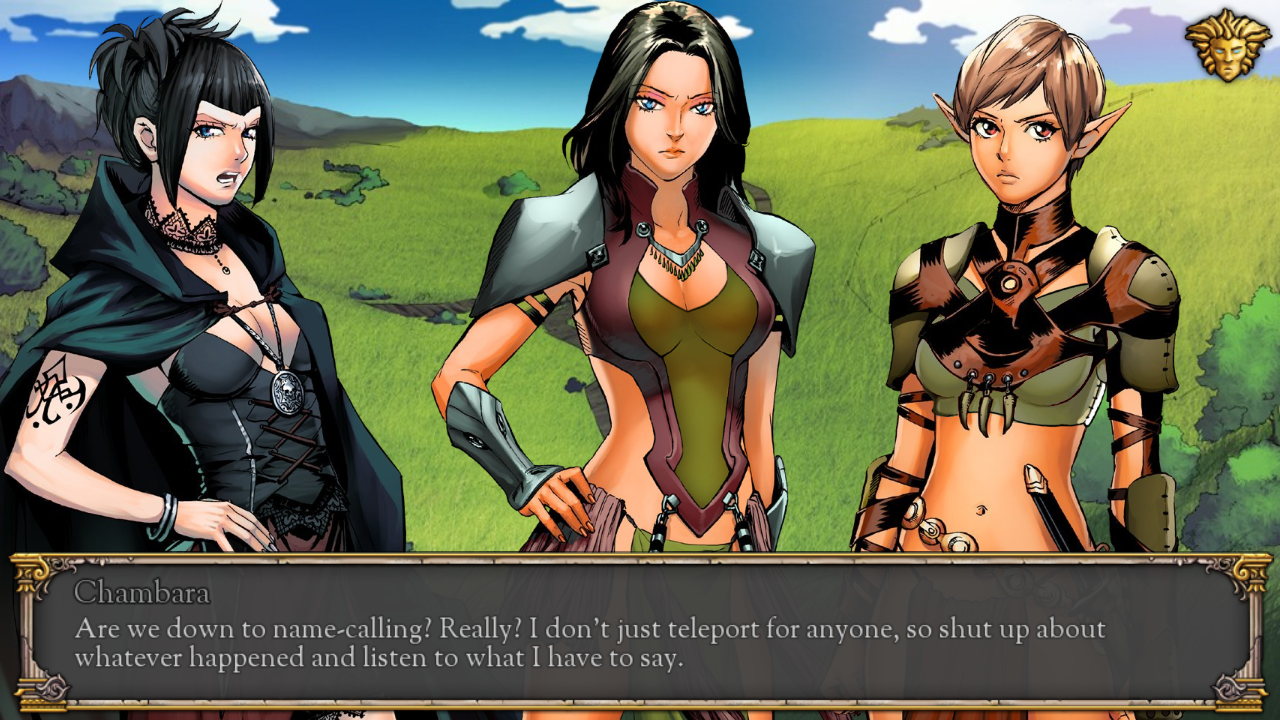 The yarn told is basic fantasy fair. Evil is on the rise, different peoples have to unite to survive, a bunch of strangers of different lands become close allies, and so forth. The interesting part is that Loren, by all accounts the central character, is not the main character. Instead, your player character is the real star and decides how everything plays out. As far as visual novels go, Loren has limited choices that are relatively easy to read (up until a series of tests during the final area of the game). You mainly branch out into different scenarios that wind back around into the main story, while having the ability to romance other party members through one of the most simplistic systems ever found in a visual novel.

At certain points during discussions in camp or throughout the story, you can choose to reply to a character in either a joking, friendly or forceful manner. Occasionally, there is also a fourth option simply called “Romance,” and it’s exactly what it says. If you can get affection with a character to five before chapter four and see the proper cutscenes that trigger in the camp, you can end up in a relationship with them, or even trigger a special scene if you’ve been romancing several characters. There’s no complexity to it, the only interesting part comes from being able to affect your character’s personality, which impacts the game’s mood significantly. A friendly character is completely different from a snarky joker (there’s even a point where a wizard will turn you to stone for annoying him). 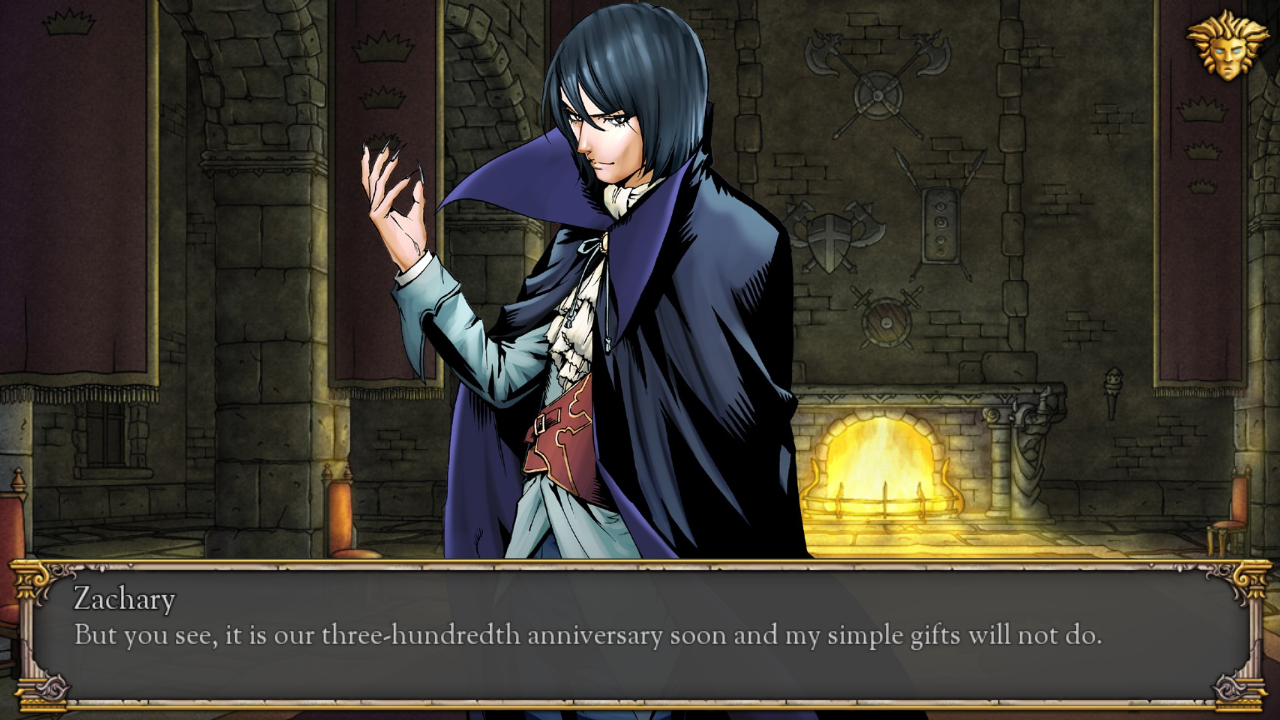 The one really notable part of the romance system is that the game only has two truly straight characters (with three in gray areas). Everyone else is bisexual or gay, something of a rarity in games like this. The end result is that the player character, no matter which is chosen, has a romantic path with a given party member, with gender changing the dynamic. Loren’s path is a good example, as Saren’s version adds in some different context and a new scene based around the established role of men within Amazon society.

The story becomes more interesting with the Castle of N’mar expansion, which adds three former minor characters as possible party members (plus one unexpected new member), new events, and a new series of quests in chapter three that can radically change the game’s ending. The material added here challenges the main story’s idea that demons are inherently evil beings, showing more complex third parties that aren’t necessarily good nor evil. Among the new party members, one has demonic powers, another practices dark magic, and the third is a repenting monk, not to mention the surprise of the last party member. 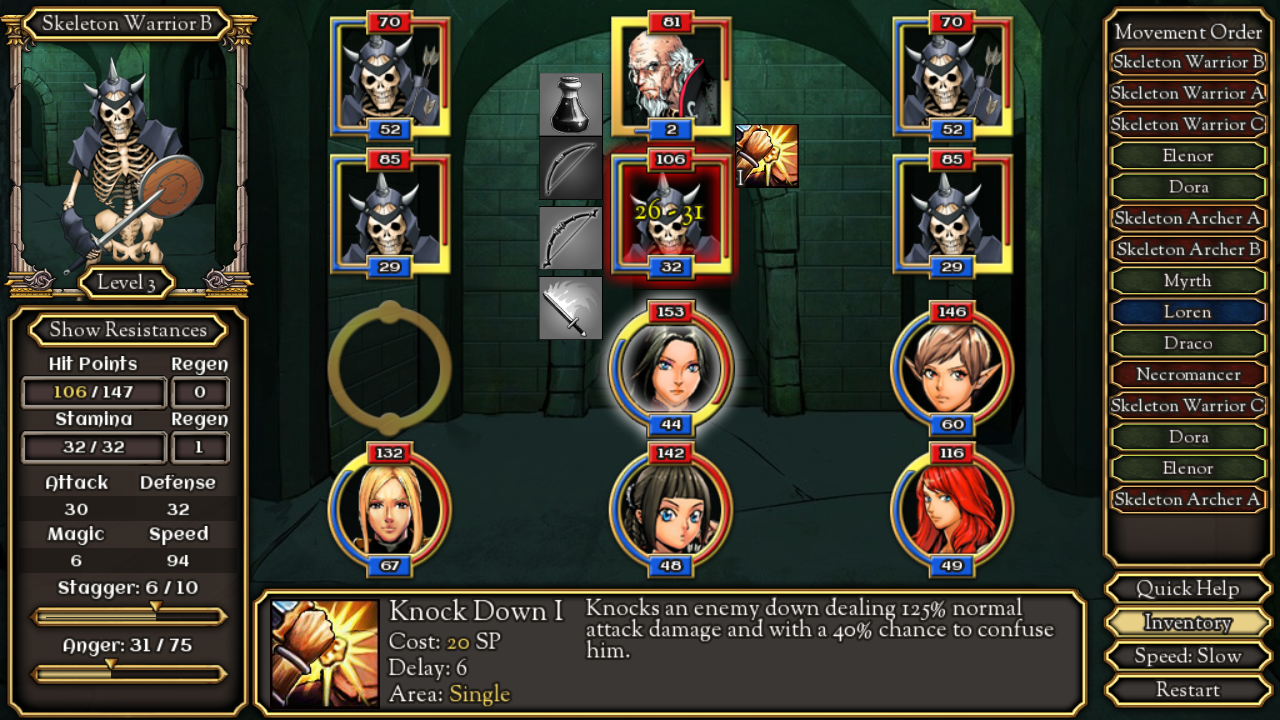 The conversations that play out among these now fleshed-out characters provide a bit more complexity to the otherwise simple story, resulting in a true ending that is meant to set up a sequel sometime in the future. It also expands on the ideas of clashing cultures through added character quests, exploring societies like the barbarians and the lizardmen. These quests add a lot of depth and back story to most every party member.

While the visual novel elements are incredibly bare bones and only saved by the strong personalities of the characters and the lively dialog, the battle mechanics are another story entirely. Loren the Amazon Princess puts heavy focus on status effects, buffs and debuffs. As the game continues, characters gain more skills that add ailments or affect stats, and these can all stack on each other. Yes, someone can both be frozen and burned. On top of that, some of the most powerful skills can only be done while enemies have the proper ailment attached to them, especially with thief class skills. Enemies play by the same rules as well, as several will focus on slowing down your party through different status effects of their own. 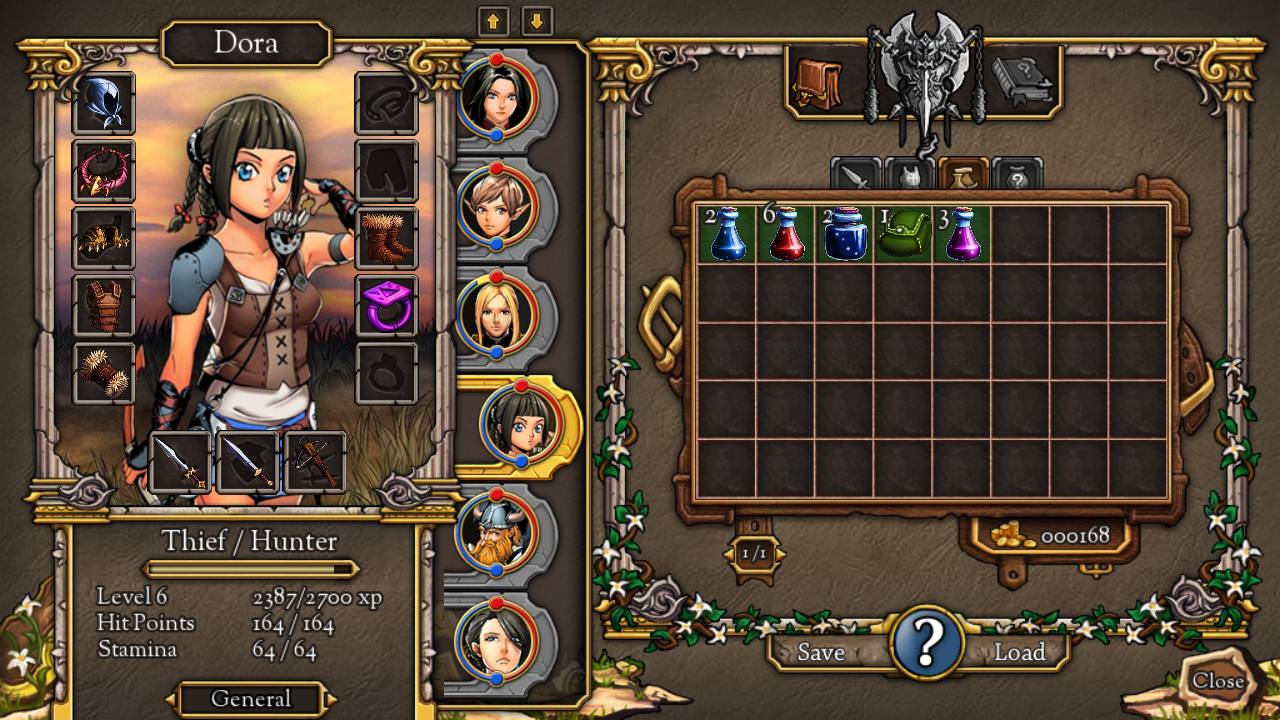 This results in a surprisingly complex system that becomes addicting with the leveling system. You can customize character stats and skills manually to best fit your battle style, meaning characters can be completely different from playthrough to playthrough. For example, the dwarf thief Dora can gain powerful attacks from her thief skill branches that require other status ailments to be used to cause more damage, or you can focus on her personal skill tree to gain more blunt damage dealing moves, like an area-of-effect rain of arrows. You can also give most of the mages their own powerful personal spells, or throw in mage class skills that are useful for support, like healing ailments or supplying skill points to other party members. The game even lets you play in two different modes, one that offers steady progression, and another that slows down progression, but gives every character a ton of skills to play with at the start.

The battles have a very simple look to them, putting emphasis on function rather than style. Characters are placed out in two by three boards on each side of the screen in square or circle borders, and you simply click over one of the borders and select an option from the titles that appear on the side. The combat display offers a lot of information, from the order of character moves, which changes based on the selected moves, up to a bar that shows how far a character is from staggering or how close an enemy is to becoming angry and aggressive, making it easier to plan out moves. 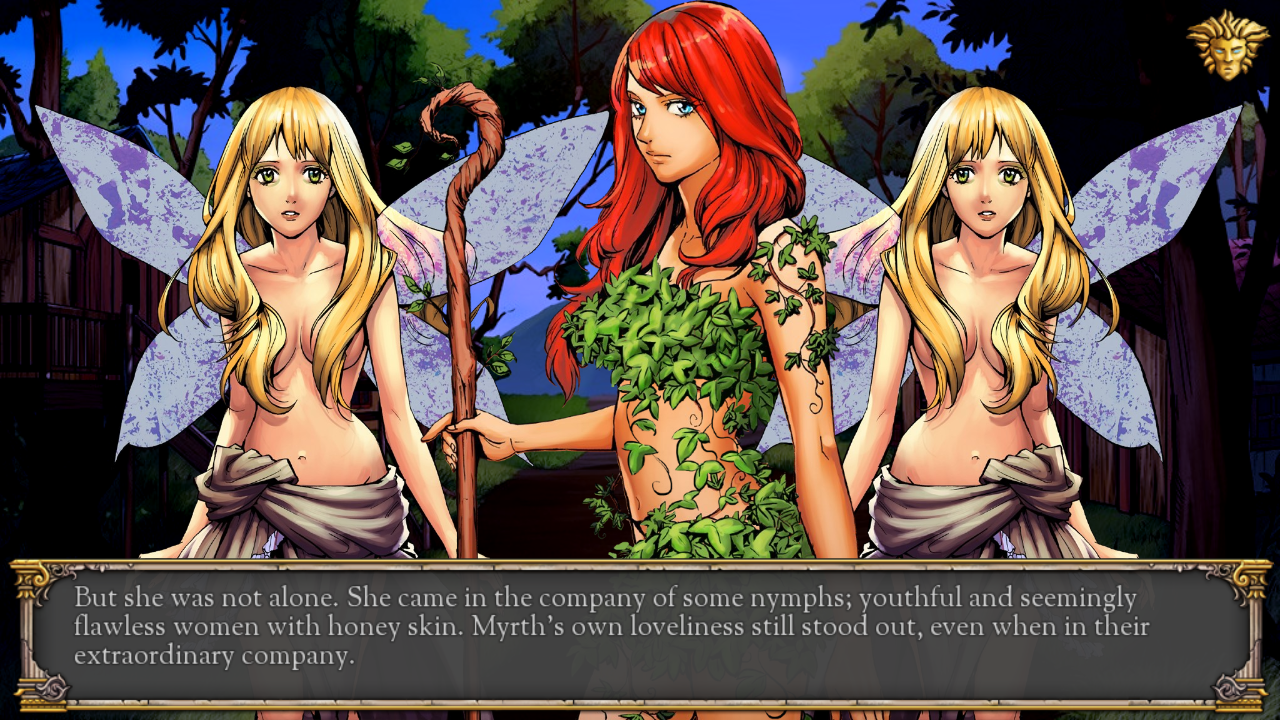 The game was obviously made to the best of the team’s ability within the given limitations. Aside from two strange moments (including one pitiful battle with a dragon), the character portraits all look wonderful. Backgrounds do get recycled, especially in expansion material, but they’re all used in the proper places. The music is wonderful and makes great use of an orchestrated style, with a strong mix of fitting themes for every moment. The grand and epic pieces really stand out, but so do the more reserved themes, such as the game’s main theme. It’s all sweeping and engaging stuff, while battle voices that trigger while using skills or fighting are surprisingly well acted.

The intricate battle system mixed with the witty and fun writing on display makes for a surprisingly addictive game and a jewel within Winter Wolves’ library. It’s definitely something that should be tried by any fan of western role-play games or visual novels, and something other RPGs could take a few ideas from.