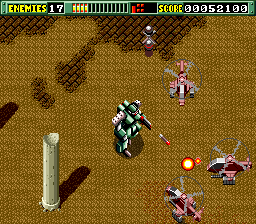 While Telenet released its official sequel to Final Zone, the by now independent Wolf Team was working on this spin-off. While it appears to have been self-published in Japan, the American release still went through Telenet’s American label Renovation Games. Since the US version was simply titled Final Zone, many took it as the first game in the series and Final Zone II as its sequel. The player once again jumps into Bowie’s N.A.P., but the mechanics are very different from the other two games, and there are no dialog scenes this time. There is a story in the manual, but it is little more than a verbose way of saying “here’s a mecha, now go blow shit up!”

The most obvious change is the shift to an isometric perspective, but the stages in general are very different. The player gets to roam around them freely, but they wrap around after four or five screens in each directions. The goal each time is to destroy a certain amount of targets, which appear randomly over the map, with no point of orientation and no apparent pattern. Sometimes it takes minutes for any new targets to show up at all. That doesn’t mean the stages are empty, though. Small drone-like enemies keep spawning constantly to keep you on your toes.

The N.A.P. is much bigger in this game and more of a proper mecha than just a suit of power armor. It’s stuffed with different weapon systems from lasers and bazookas to flame throwers and a hookshot. Each weapon can be equipped as primary or secondary, resulting in much different firing modes. The primary (“Hand”) mode has usually just a straightforward attack, while the secondary (“Option”) is more destructive and covers wider angles, but its ammunition is limited. As the mecha gets damaged, more and more weapons are destroyed, but sometimes drones show up to drop off recharges. Much of the selection is filler, though. A lot of the weapons feel very similar, while some others are just plain worthless. 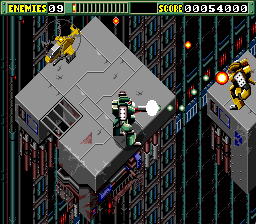 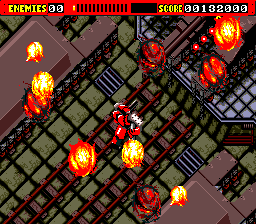 Each of the game’s seven stages is followed by a boss fight, which takes place in confined quarters. Most of them are just similar mechas with different patterns, but there are some exceptions: The first stage has you attack a military train and take out all its guns in an auto-scrolling shoot-em-up stage, of which there are three in the entire game. Another one is just a huge immobile cannon guarded by smaller turrets.

Unfortunately, the controls just don’t work well enough for the fast-paced action game this wants to be. When moving while shooting, the mecha strafes instead of turning, so you have to release the fire button to turn around, but it’s all really unresponsive and most of the time you just find yourself running backwards into enemies instead of aiming at them. The game is relentless in throwing more enemies at you, anyway. The mecha’s health bar is pretty long, but it doesn’t get recharged after a stage, and the supply packages only ever restore one measly unit. This means you basically run on one health bar for the entire game. It’s possible to continue after losing, but this restarts the level, resets the score and is limited to five times on the easy difficulty level, three on normal and only one on hard. 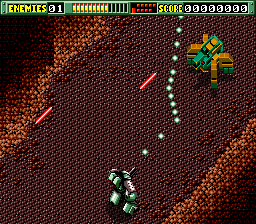 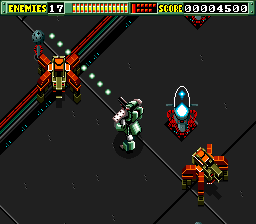 The action soon starts to feel repetitive, and the closely zoomed-in view is a bit too claustrophobic, aside from the fact that because of it you often see enemies almost too late to react. All in all, FZ Senki Axis is not as terrible as the first game in the series, but also not as solid as the second.

FZ Senki Axis was first made for X68000 computers, but of course that version remained exclusive to Japan, leaving Western audiences with the Genesis port. It is essentially the same game, although a few boss fights are changed, some of the stages swapped around, and the stage 6 boss and stage 7 simply cut from the game (the original boss for stage 7 now appears at the end of stage 6). Also gone are the intro and ending sequences, which went without any dialog or narration to begin with, so no “story” per se is lost. It’s still a bit unfortunate, as they did look quite good and helped to build up atmosphere, a task that’s now left to the music alone. The soundtrack is once again quite excellent, although its constantly frenetic rhythms that seem to scream “CRISIS!” all the time can get a bit tiresome – relaxation is only allowed after beating the game, which probably most players never did. 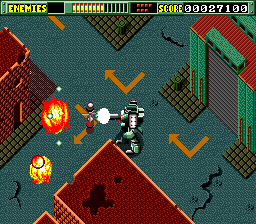 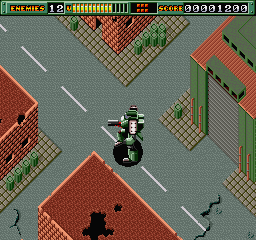