Bio-Hazard Battle, or Crying: Aseimei Sensou (or “Sub-Life Battle”, roughly) in Japan, is an unusual game even for Sega. Published in 1992 for the Sega Genesis/Mega Drive, it’s one of Sega’s few horizontal shoot-em-ups besides Fantasy Zone. It also has the distinction of being built entirely around biological themes. Rather than the Giger-esque visuals of R-Type or the gore piles of most other organic shooters, Bio-Hazard Battle draws its inspiration from nature. Just about everything in the game looks like some twisted or corrupted version of an existing animal, even the player ships, which are the sort of creepy crawlies reserved for the final stages in other shooters. 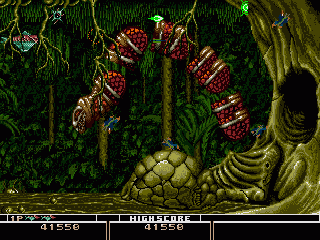 As far as the story goes, a massive biological war has broken out across the surface of the planet Avaron, rendering it inhospitable for human life. The few remaining survivors aboard the space station OP Odysseus are put into cyrosleep, waiting until the day it may be habitable again. It isn’t until hundreds of years have passed that they are finally awoken. As the pilot of one of four bioships, a mixture of machine and living being, you are tasked with finding a new home for the survivors, as well as clearing out any biological contamination that you happen to come across. 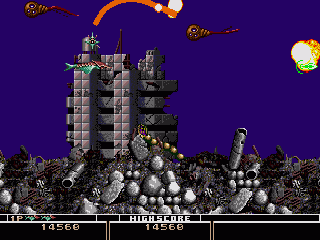 In terms of mechanics, Bio-Hazard Battle is a fairly typical. The game offers the usual assortment of options, as well as a two-player mode. The two-player mode is unusual in that the player ships cannot fire through each other, requiring a modicum of teamwork to progress. In another unusual move, running into obstacles doesn’t kill the player, although they will die if they spawn in a wall or get crushed against the screen. 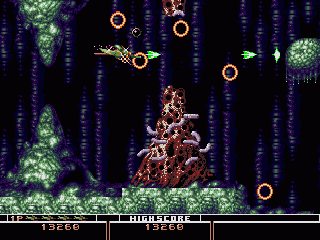 The player has two default weapons: a standard pea shooter, and a charge shot called the Plasma Wall. In addition, the player ship is always accompanied by an orbiting option, or Power Star, that fires whatever sub-weapon is currently equipped. This satellite weapon moves in the opposite direction the player does, and shields the player from enemy fire. It also damages enemies on contact, which can be used to the player’s advantage. 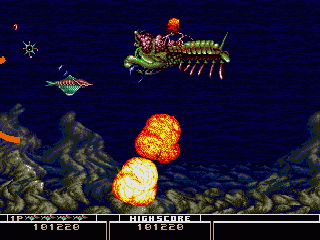 There are seven sub-weapons in total, spread over four colors: green, yellow, red and blue. Each sub-weapon can be upgraded a total of three times by collecting the same color multiple times in a row. The power level will remain the same if the player switches to a new weapon, and one power level is lost upon death. Each ship has four different sub-weapons, one for each color, and all ships have at least one weapon in common with another. The default sub-weapon is the green implosion pod, which acts like a spread gun. 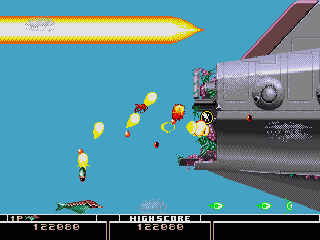 There are 4 ships to choose from, each with a different load out. Electra’s design can best be described as some sort of flying shrimp, and a good starting ship for beginners. All of its weapons are easy to aim, with two of them homing in on enemies. Its only weakness is that it has no spreading or bouncing weapon. Looking not unlike a golden, armored brain, Polyxena is arguably the best ship in the game, as it has a weapon for every situation. It’s also the only other ship that has access to the powerful homing laser. 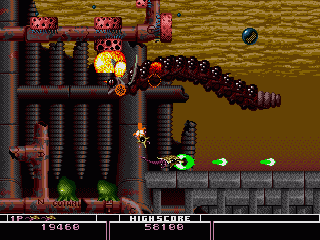 Hecuba is a large grasshopper that’s for more experienced players. Its sub-weapons are specialized towards power, making it difficult to use. To compensate for this, Hecuba is the only ship that has two bullet destroying weapons. Orestes is the polar opposite of Hecuba, being balanced towards rapid fire weapons, which is appropriate given it looks like a dragon fly. Orestes has no homing weapons, nor does it have a weapon capable of destroying bullets. This can make navigating some sections very tricky. 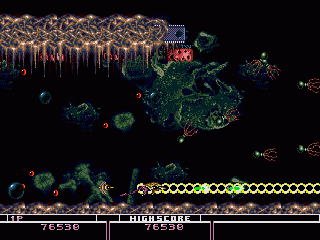 Right from the beginning, Bio-Hazard Battle goes out of its way to leave a lasting impression on the player. The first stage begins with the player’s ship being launched into the atmosphere of Avaron, where it quickly descends to swelling fanfare. The pacing is pitch perfect, with waves of enemies that almost seem to move to the beat of the music. Each of the following seven stages introduces something new, be it an enemy or environmental gimmick. Most of the stages take place in natural locations such as jungles, caves and even the ocean, but a few see the player flying through the ruins of former cities and abandoned research facilities. There’s even a battleship stage, where the player has to take out a remnant bioweapon piece by piece. 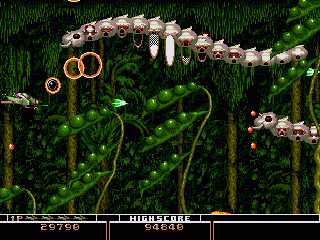 The visuals are hit or miss, with chunky sprites, flat backgrounds and the occasional garish palette, but thankfully, the bestiary more than makes up for any graphical shortcomings. The screen is often filled with literal swarms of nasties, occasionally causing the game to slow to a crawl as the processor tries to keep up with the action. The game also features some of the most well animated multi-segmented beasts ever seen in a shooter, with a new variant appearing in every stage. The most fantastic enemies are the bosses, however, particularly the bony, Giger-esque snake that is featured on the box art, or the giant shrimp that shields itself with muck dripping from the walls of a cave.

Tying the package together is the bass heavy soundtrack. The music syncs up perfectly with the on screen action, with enemies often appearing as if on cue. The soundtrack has a booming, thunderous quality to it that works well with the organic visuals. A few may find the soundtrack to be grating, however, especially given the limitations of the Genesis’ sound chip. The boss theme is particularly egregious, consisting mostly of a blaring klaxon while gong is struck in the background. 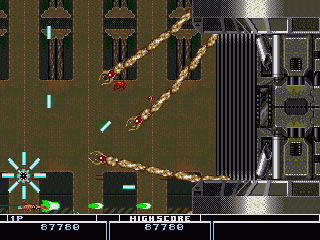 Bio-Hazard Battle‘s first four stages aren’t particularly difficult, but the difficulty quickly ramps up by the fifth. Bullets start to fill the screen, and enemy swarms become more numerous. The player’s hitbox is fairly large, so destroying enemies before they appear is more important than trying to dodge their shots. Losing a single power level in the later stages can be disastrous, leading to countless deaths as the player struggles to defeat stronger foes.

There are a few regional differences between the two versions. Besides the different box art and title screen, Crying lacks an autofire option. This makes it incredibly difficult to play, as it was not designed to be played without it 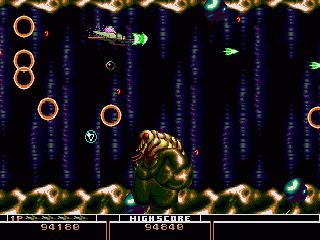 While not one of the system’s better shooters compared to the likes of Thunder Force, Gleylancer and Eliminate Down, very few games can match Bio-Hazard Battle in terms of atmosphere or visuals. There’s a real sense of foreboding as the player slowly works their way back to the true source of the bio war, with the final stage being incredibly memorable.

Bio-Hazard Battle was re-released on the Wii’s Virtual Console service in 2007, and on Steam as part of the Sega Classic series in 2010. It also appears on the Sega Genesis Classic Collection Gold Edition compilation for Windows PCs.