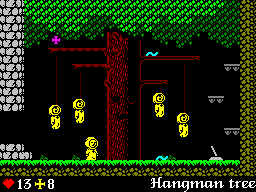 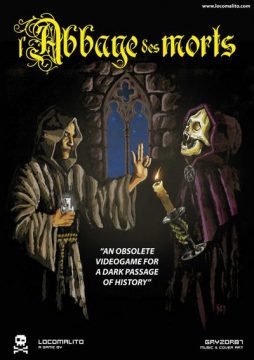 Modern games designed to evoke the popular titles of yesteryear are ubiquitous. However, few manage to duplicate not just the look and sound, but the successful atmosphere and structural limits of those same classics while still remaining fun to play. One game that does pull it off is l’Abbaye des Morts. A 2010 game from Locomalito, it’s a great effort that creates a foreboding and dangerous game with respect to the style of many action originally made for the ZX Spectrum in the mid-80s. It’s also great to play a game made in this style that has such a violent tone to it without resorting to the excessive gore and shock visuals seen in games like Soft & Cuddly. The game is a side-scroller where the player must avoid enemies while collecting items in the vein of Manic Miner. However, l’Abbaye des Morts‘s focus on dark, moody backgrounds accompanied by large, single color sprites makes for a striking game, an aesthetic that easily complements its simple but sad story.

Most of that story is revealed as soon as players start the game. Players assume the role of Jean Raymond, a Cathar monk narrowly escaping a brutal purge of his fellow believers during the Albigensian Crusade. After hastily taking refuge in an abandoned abbey, he soon learns of the even more horrific mass murder that occurred in the abbey itself at the hands of a long dormant evil. Unfortunately for players, Jean Raymond is no Simon Belmont, he can jump and crawl to avoid obstacles, but has no way of attacking enemies. It’s an appropriate choice for the tone of the game, since the player has several lives with which to pick up where they left off but even brief contact with an enemy means death. Even if Jean Raymond touches spikes, or falls into water while trying to obtain a cross or heart item he instantly perishes (maybe he’s descended from the Belmont clan after all). 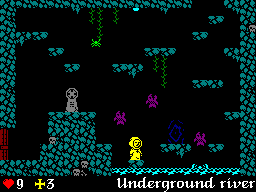 Twenty-Three screens await you. Will you unravel the dark secrets of The Abbey of Death?

With no means to attack enemies, it’s up to the player’s precise timing and platforming skills to solve the abbey’s mysteries and figure out a way to escape. In a twist worthy of SNK games like S.A.R.: Search and Rescue and Cyber-Lip, however, Jean Raymond’s way to salvation takes a few unexpected turns. Fortunately, each section of the abbey has a checkpoint to continue from upon death. Also, while some of the game’s twenty-three unique screens offer more desperate situations than others, there’s no time limit so players can carefully plan out their moves from place to place. There are also helpful hints scattered throughout the game to guide Jean Raymond in the right direction. While the presentation of these clues may remind players of the scrolls in Castlevania II: Simon’s Quest, stylistically they bear a much stronger resemblance to the 80s Spanish computer game classic La Abadia del Crimen. The music is also an effective part of the game’s atmosphere, its simple but very effective work by Locomalito collaborator Gryzor87 (who is also responsible for the game’s dramatic cover artwork).

Locomalito prides himself on creating short, challenging action games to recreate the feel of going to the arcades in the 80s and early 90s. This makes l’Abbaye des Morts a bit of an outlier with its backtracking and gloomy setting compared to his more recent works like Maldita Castilla and Gaurodan. However, the same level of dedication and quality is present. While this particular game is from 2010 one can already see the dedication to not just the looks of old games but to the responsive controls and easy to pick up action that has earned him ongoing praise from retro gaming community. Not one to compromise the spirit of the game for action, l’Abbaye des Morts even features a few puzzles that must be solved to complete it. A couple of these are quite devilish and will keep some players stumped for a time, but the game’s length is generally short.

As Locomalito prefers games that can be completed within an hour, adventure and platformer games of the ZX Spectrum are ideal to imitate for a more deliberately paced and atmospheric game. Like Heavy on the Magick and other titles of its kind, in l’Abbaye des Morts something visually unique is happening on every screen. This constant variety of enemies and obstacles work well with the simple controls to make a game that’s easy to play through in short bursts while still providing a fun and varied experience.

According to Locomalito’s website, the game was inspired during a stay in the former Languedoc area of France (focus of the Albigensian Crusade in the 13th century). Work actually began on the game during the trip, and it was completed in two weeks. Ports to other platforms soon followed, with very subtle changes to the game’s graphics. The most impressive of these is a version that will function on an actual ZX Spectrum realized by an Italian musician and 80s computer game aficionado who goes by the name of Darkhorace, along with another fan who calls themselves Jerri. It also has a few subtle changes to enemy movement patterns. While the music is gone, and the graphics aren’t quite as smooth as the 2010 PC game, it’s great to see the atmosphere and style of the game able to work on the actual machine it was designed in homage of. 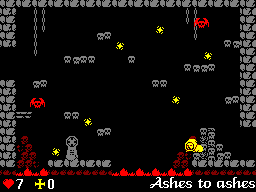 One year later, Alain Thellier would also create an excellent release of l’Abbaye des Morts for the Commodore Amiga. This version offers an option for “16-bit” graphics, creating a nice approximation of the enhanced conversions that would often grace the Amiga. While there are again a few very subtle changes to certain enemy placements, the soundtrack is kept intact. This was followed up by a release for the Mega Drive / Genesis, which also includes graphic display options replicating a whole variety of retro computers. No matter which version of l’Abbaye des Morts one plays, it’s a tightly made platformer with a very effectively executed atmosphere and a relatively unique premise. While the details of Jean Raymond’s adventure are of course abstracted due to the self imposed limitations of creating a game evocative of 80s computer systems, the use of color and variety of scenery and enemies in the game keep it interesting and fun to play.