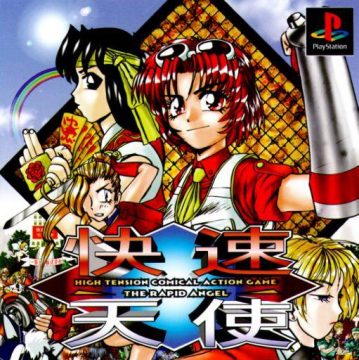 Sony of America’s infamous anti-2D policy during the PSOne era is well known, but the business politics of Sony Japan couldn’t have been more different, and an excellent example of this is Kaisoku Tenshi: High Tension Comical Action Game The Rapid Angel (for the sake of sanity henceforth referred to as Rapid Angel). Resembling at first glance a sprite-scaling belt scroll brawler perhaps similar to Guardian Heroes or Panzer Bandit, Rapid Angel on extended play comes across like the first experimental product of a fresh development team. Filled with a multitude of idiosyncrasies and sometimes haphazard design, not to mention budget cinemas which look as if they’ve been animated in MS Paint, Rapid Angel still manages to hold a certain charm – assuming you dig the almost “doujin” vibe. 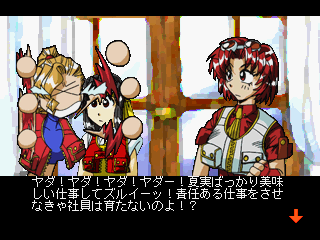 Previously only available in Japan, The Rapid Angel was an extremely niche title spoken about only by super hardcore importers. After years of obscurity though it has finally made its way to the west thanks to MonkeyPaw Games, who published it as a download title on the US PSN’s Import PS1 Section. It’s still in Japanese, but that shouldn’t prevent one from playing through it. Additionally, MonkeyPaw Games has provided translated instructions on their website.

The main story revolves around three young women and their boss, who run a small express delivery company, the Kaisoku Tenshi (which simply translates to “Rapid Angel”). Their latest job sends one of them off on a merry romp across a landscape of rustic villages, caves and big cities. But of course this wouldn’t make a video game story if something wasn’t fishy about that parcel, and the conspiracy involving mad scientists, corrupt politicians, kung fu maidens and a duo of wizards unravels. Oh, and there’s also a cat right at the start of the game who is in actual fact a wizard in disguise and ties the entire thing together; no, seriously, if you attack that cat you get the bad ending. Prior to starting the game, and punctuating several levels, are lengthy full-voiced cut-scenes explaining the surprisingly complex narrative. These are actually kinda funny, containing jokes, several play-on-words (including one where the protagonist answers her phone and mistakenly thinks the person has introduced themselves as “Mr Hello”) and tons of typical Japanese slapstick. Without experience of spoken Japanese you’re going to really struggle to make any sense of it and, while this contains a degree of charm in itself akin to the glory days of importing, most players will likely skip these, at least the second time through. 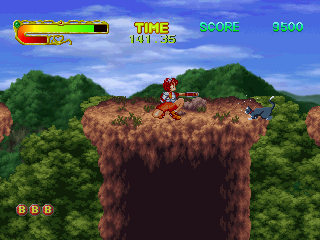 Which segues nicely with one of the game’s main attractions. You start off choosing one of three heroines, but upon completion of the game (remember, do not attack the cat), you unlock a further two characters. Each character controls drastically differently and has has different cut-scenes (save for the last one, who doesn’t have any cutscenes at all), plus in the case of unlocked characters they start on different stages. 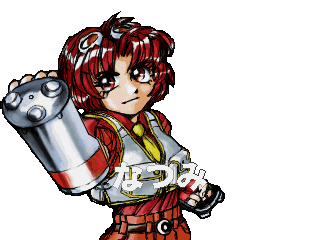 Natsumi seems like she’s coming straight out of a belt scrolling brawler, focusing on combos and a number of special attacks. Her major weakness is a lack of range. 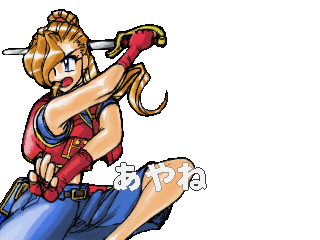 Ayane is more your typical action-platformer hero, fighting with a sword and a rather limited moveset. She’s the most well-rounded one of the trio and easiest to get into. 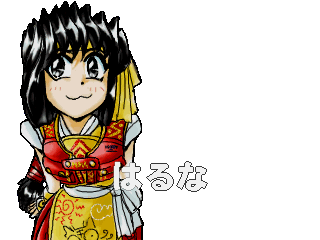 The naive Haruna prefers to stand the distance to her enemies, as she predominantly fights with projectiles. At first she would appear as the weakest of the three, but her range and a variety of hard-to-execute special attacks actually put her ahead of her colleagues. 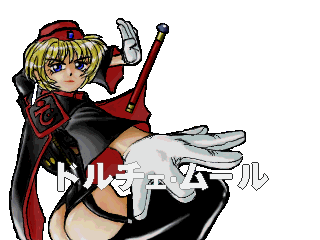 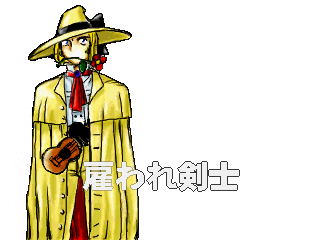 He plays an ukulele and is paid to prevent our heroines from ever reaching their destination. He actually doesn’t play a very big role in the story, but he’s cool, and that should be reason enough to have him as a secret playable character. 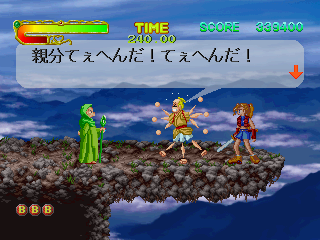 Also, as you encounter several opponents throughout the game you’ll need to answer questions/make choices, which affect the way the game plays out. In some cases you can entirely skip certain bosses or sections, and sometimes the results of your choice aren’t apparent for some time – granting mercy to a young wizard may come back to haunt you later, for example. If you can’t read the text in the choice bubbles though, well, just spin the barrel and hope the chamber’s empty.

The different playable characters add a degree of pseudo-depth to the brawling mechanics, but in truth the enemy situations seldom warrant the range of abilities on offer. The choice of character most of all determines the difficulty level, as their abilities are wildly unbalanced. Haruna’s ranged attacks, for example, render most bosses entirely harmless, while some of the more mobile ones are hardest to beat with her. The unlockable characters also play rather annoying because they end their combos with lengthy attack animations.

But no matter which character or difficulty option you chose, the game always ranges between easy and laughably easy. Often the simplest way to deal with attacking soldiers is to just jump over them and run along, while many bosses, including the final one, are easily disposed of by just standing in front of them and mashing attack. Jumping is so floaty that you don’t even need the double jump it gives you. Most of the difficulty comes from the fact that the game doesn’t refill your health at the start of a new level, but the occasional healing items and unlimited retries more than make up for it.

Which isn’t to say the game lacks diversity, because it changes style like a schizophrenic on acid, one moment belt-fighter then scaling mountains, disabling traps, falling through sections of scenery into mysterious new parts of the stage, and at one point in the cave even pretending it’s a Metroidvania, until you’ve found the pickaxe and dispatched some wizards. Mostly though it’s just nuts, in the nicest way possible. 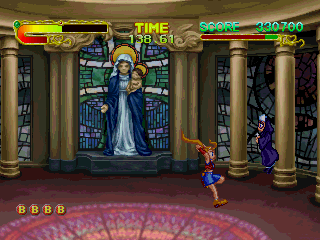 The Rapid Angel is extremely rough around the edges and despite this, or rather because of it, there’s a strange hypnotic lure, like some kind of upmarket grindhouse film. Your mileage is likely directly connected to how much you liked any of the 16-bit output from Telenet / Wolfteam / RiOT – that whole messy web of subsidiaries and divisions, who produced a wide range of quality for the PC Engine and Mega Drive, such as El Viento and Valis. None of their games were masterpieces, but they had a kind of unpolished charm peculiar to a very specific era in gaming history. These types of games, with less polish than others, satisfied a very specific kind of appetite and, whatever your views on them, they certainly don’t make them like this anymore.

There’s just too much personality in Rapid Angel for a start. As mentioned, achieving the good or bad ending is dependant on whether you leave or attack a cat found in the game’s first 30 seconds. There’s five characters, all with significantly different gameplay and personality. Dialogue is at best spaced out and sounds as if recorded by the programmers’ wives. Locations don’t tie together and there’s a rambunctious sense of pacing. Plus huge amounts of man-hours were wasted in trivial things that you will only glance at for a few seconds, like an animated sprite for a ramen shop, or someone selling vegetables on a bridge, or any number of other backgrounds elements. Which isn’t a bad thing, the level of detail here is totally awesome, but in all likelihood they were spending more time on that than sharpening the combat mechanics. The ability to make choices that affect the game’s progression is also a cool touch, not quite Mass Effect 2 in terms of scope but nice enough if you like experimenting. There’s a whole bunch of stuff that would never fly in today’s focus tested development world. 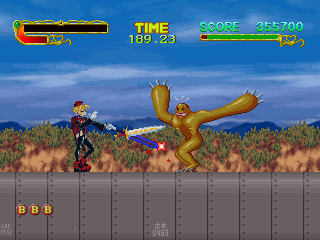 Additionally, particular mention must go to the two player mode, which also differs from the norm. Choosing two players allows a friend to control a tiny, immortal cherub, which can fly around the screen freely shooting at enemies. Some reviewers have criticised this, arguing instead for traditional 2P mode with both characters on-screen. Apart from the problem of sprite size and dimensional range which makes this wholly unfeasible, these people are missing something important: how many games allow a second, less skilled player to enjoy the fun of playing, assisting rather than hindering player one, and still enjoying themselves? Sonic the Hedgehog 2 springs to mind, since a second (possibly much younger) player could take the controls and do their thing, safe from harm while proving beneficial. This is great, it encourages people with a huge gap in age or proficiency to play together. It also prevents the kind of fights that occur with something like The Blues Brothers, where the two players would often only end up arguing over the fact that they’re hampering each other. A game like Final Fight has a working two player mode because the playing field is pseudo-3D, with a vertical range to move in, Rapid Angel is pure 2D with the vertical range facilitating jumping, which would obviously prove problematic during combat. The employed solution is elegant and has its merits!

And there you have it. Rapid Angel is a title filled with unusual but unrefined ideas, seemingly from an inexperienced team, or perhaps an experienced team with no budget and no need to adhere to any kind of implied guidelines. This refusal to conform is what makes it interesting. There’s plenty of replay value thanks to the variety of characters, a wacky over-the-top story and action sequences, different endings and cut-scenes, and a definite charm. It’s not to everyone’s tastes, but if you can appreciate something off the beaten track, out of the norm, and a little odd in places, you might get a kick out of it.