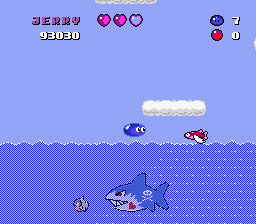 Game Freak’s ambitious initial title was followed up by a much more standard platformer. Funny enough, it was also one of the first of a minor trend of platformers where you play as a blue gelatinous ball, like the later Putty and Claymates games. You play as Prince Jerry Bean (GET IT!?), a young man or royalty sent to marry your betrothed Princess Emi after the passing of your father and king. However, your younger brother Prince Tom Bean (GET IT!?!?) wishes to be crowned the king instead. Tom hires a wizard to zap Jerry into the beany blob and takes off with Emi in tow. It’s up to you to save Emi and stop Tom and the wizard and change back to normal. 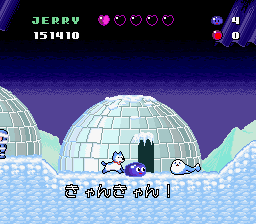 As an early SNES title, it isn’t far removed from the platforming faire of the NES days. The blue slimeball Jerry heads left to right using the standard 2-button attack/run and jump methods perfected with Super Mario Bros. years before. Aside from the music and sound effects, there is little push to take much advantage of the 16-bit system, lacking transparency effects for the underwater segments. The only real attempt to showcase the new console’s visual capabilities was the Mode 7 scrolling on the moon, though many first gen SNES games abused that built-in graphic setting. Luckily, a certain level of charm in the blocky build of the colorful sprites holds up today better than during its debut. 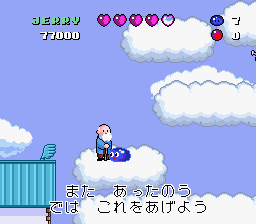 Playing as a slime ball brings a few spins to the platforming mix. Since Jerry has no limbs, he has to find other means of offense. He can stretch up or squished down around or on enemies to knock them away, or fling balls or other power ups he collects and stores in his jelly mass. His slurping goo form can also climb walls and on ceilings or slip through pipes to traverse levels or save his slimy bacon from plummeting into a pit. He can collect items in flowers throughout the levels, gathering multiple balls as ammo, a steel ball that weighs Jerry down but can be flung over and over again, a hi-jump booster, or a seed he can plant for a beanstalk to climb. Each stage has posts that spell out J-E-R-R-Y, which grant two extra lives to Jerry Bean if he touches them all and serve as checkpoints. 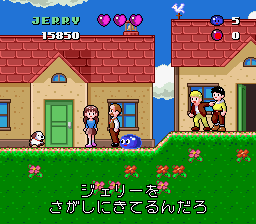 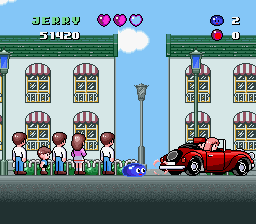 Much like the Mario series, the kingdom seems to stretch a myriad of biospheres. The game leads through many stock level themes with a beginning grassland leading to an urban area, desert palace, the aformentioned moon, the arctic, a beach, a dark castle, and more. In between each stage is a city, town, or village to head through, chatting with townsfolk and earning 1ups from the helpful but mysterious elderly mentor watching out for the cursed prince. The populated locales do spread to strange areas like a mountain villa, a collection of igloos, a cloudy heavens inhabited by angels, even a few people living inside the belly of a whale. They serve as breathers with plenty of tips, flavor text, and free extra men– er, slimes. The Magician’s controlled army are quite cutesy, with walking mice and googly-eyed boulders, living flames, penguins patrolling the landscape en masse. A few out-there foes stand guard, like unfrozen cavemen, naked fire-breathers, spatula-throwing chefs, to even a constellation as a boss. 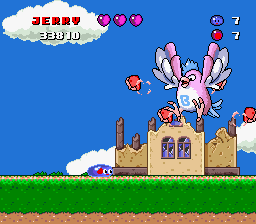 The soundtrack for Jerry Boy / Smart Ball deserves attention as it was partially created to show the power of the sound chip. It doesn’t reach the technical heights of Yuzo Koshiro’s early SNES work ActRaiser, but tries better than many titles of the time that fell back on the built-in soundbank of overused filtered Mario Paint Flower trumpet and Seinfeld-like bass guitar backbeat. Much of the OST was headlined by veteran producer and keyboardist Yasuhiko Fukuda (credited as Hirohiko Fukuda). Known for his work with 80s bands like YOU and QUYS and composing the soundtrack for the anime They Were Eleven but before working on many of the Bomberman titles, Fukuda brings his chops at creating a eclectic mix of genres for the score. Yasuhiko was also assisted with 2 other new starlets to bring the music to this game, one of them an up-and-coming Akira Yamaoka getting his start producing chiptune tracks unlike his industrial edge to them. 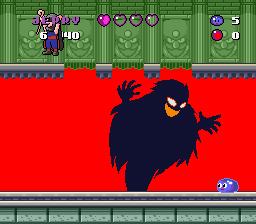 The biggest issue with Smart Ball is the sloppy controls. Jerry tends to stick to walls and likes to fall off ceilings if scooted off the wrong way. Much of these problems stem from wrestling with the D-pad and especially the Run/Attack button. Jerry is a pokey blue slime by default and barely moves on walls and never on the ceiling unless he’s moving fast enough. Even jumping high enough without a hi-jump power-up inside is difficult without enough dashing momentum. The second problem is the sharing of run and attack on the same button like on the NES. Like Fire Mario, Jerry tosses a projectile as he starts picking up speed due to the shared button, but Jerry’s ammo is very limited, costing precious balls due to having to perform a required running start or wall climb. Since any power up not health or a 1up supercedes your gathered balls, it’s very quick to lose any added firepower Jerry might have. It’s best to stock up on regenerating flowers for a bunch of balls and hope for the best, though their weak throwing arc still requires the blue bean to stick close to baddies. Death can come quick due to level design or devious enemy placement, but the generous extra lives and multiple checkpoints helps curtail the cheapness. These faults knock the game down to merely “okay” status as the lack of a rush on Sony’s side might’ve given time to tighten the controls – or at least move to use at least 3 buttons on the control pad. 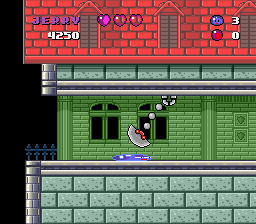 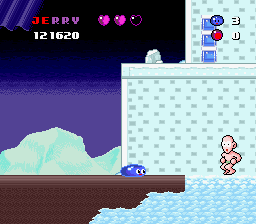 Production came about due to Tajiri’s advisor ties to Sony months before release of the Super Famicom. Due to the DSP soundchip being manufactured by Sony, the company wanted a game to promote the capabilities near the launch date. Submitted ideas within Game Freak were tossed around, originating as a silly premise of creating an RPG with the protagonist as a low-level entry enemy staple slime. Over time, the RPG elements were removed to make the game more actiony while using the slime’s powers for platform elements. The effort turned to be a means to be as opposite a title as Quinty was in order to become a bigger seller. An early prototype under its original monicker “Jelly Bean” was showcased at trade shows and a few gaming magazines, revealing a more “realistic” (for the time) graphical style before going with a more cartoon vibe all around. In fact, more gag and comical one-off enemies were planned to crop up within the game but had to be trimmed out due to memory concerns, leaving only the rare out-there enemy like the wide-eyed running man. Aside from the name and title screen change, the US version Smart Ballremoved the story intro and every town/NPC interacted segment, trimming out a large chunk of the levels and much of the life of the game to focus on the action. The only cutscene left is right after the final boss is defeated with Emi running into the now-human-again Jerry before they console Tom. The Japanese text accompanying the scene was removed entirely. The only mention of the wizard and the curse along with any plot was placed within the US instruction manual. Once again, Sugimori’s cute anime cover was replaced with extreme airbrushed 90s attitude with flaming meteors, a strange representation of the giant bird boss, and Sony Imagesoft’s logo taking a huge chunk of the corner. The title was changed to differentiate itself from the similarly titled but more lackluster Ocean-developed Jelly Boy. These changes hindered the game’s chances of standing out in the wave of titles for the SNES, causing it to drift out into forgotten waters. 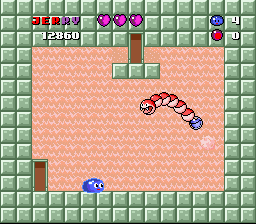 Aside from the game proper, a brief manga adaptation was released in Japan, Serialized in Family Computer Magazine and drawn by Ken Sugimori, it’s a cute but simple retelling of the backstory and game’s progression. A collected trade of the run was published in 1993, containing interviews and documents of the making of Jerry Boy, along with a bonus mini-story named “Jerry Girl” which focuses on a high school girl named Cherry Fujio asking the wizard from the game to grant her better stretching and flexibility for rhythmic gymnastics and being turned into a slime. After that, the IP would lay dormant for good, except for a planned sequel that never saw the light of day.