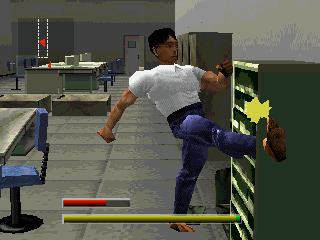 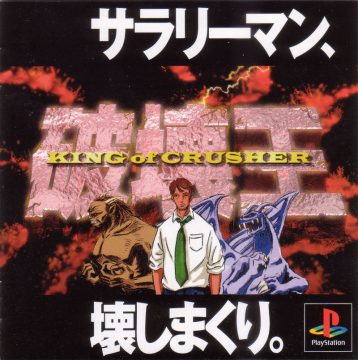 (WARNING: This review spoils the ending of Hakaiou: King of Crusher, as part of the overall thematic analysis. If you’d prefer to go into the game blind, avoid reading this review.)

Hakaiou: King of Crusher is a fascinating game. On the surface, it seems very much like a typical example of bakage: a competently designed game that’s more memorable for its bizarre concept and imagery. You play as a salaryman who gets bitten by a bug, becomes consumed with rage, and rampages through Tokyo and New York as he gradually transforms into a Godzilla-styled monster. Its premise is hilarious, but the execution is only so-so. However, on further inspection, it’s possible to view it as a game where all its ideas, strengths and flaws are in the name of exploring a singular theme: the folly of trying to find true, selfish freedom in life. 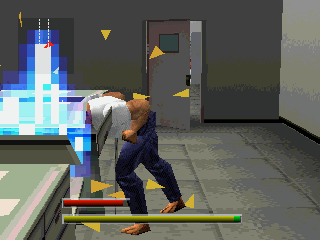 This is an idea that’s stated from the very beginning, through the uncannily animated CGI cutscenes that precede each level. A salaryman sits in his kitchen, his wife recently having given birth to a sleeping baby, when a strange demonic bug flies in and bites the man. That unsettles him plenty, but what really sends him into a flying rage is when the bug whispers an idea into his ear – everything in your life is holding you back, and the only way to achieve true freedom is to destroy it all.

To that end, the man starts destroying everything in his apartment, causing his wife to take the child and run for it. From here, the core gameplay loop is established: smash up as many objects as possible in order to fill the red meter so that you can go to the next level when you reach the end, and continue destroying objects to refill the constantly depleting yellow meter that threatens to end your rampage. Each level repeats this same idea with different settings and threats, which increase in intensity from cops and dogs to helicopters and tanks over time. 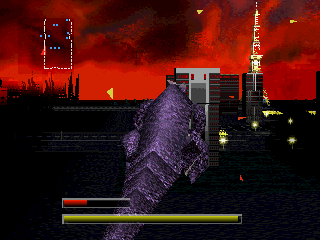 Every few levels, you transform into gradually bigger and more powerful monsters, and the scale of your destructive range widens with it. Starting from your weedy little apartment, you’ll go on to destroy offices, neighborhoods, gas stations, city blocks, countryside dams, and the whole of New York City. However, nothing ever really changes. Despite each level ending with the misspelt message “Accomplised! Now you are free.”, you’re not really free. You simply move on to the next level and do exactly the same thing as you did before: smash stuff and avoid getting damaged.

The bug repeatedly insists that you will attain true freedom through the joy of destruction, but you’re condemned to the restrictions of your rage: you can only destroy, and are alternatively hunted down and feared by those left in your wake. You’ve simply changed one set of circumstances for another, and this is something further emphasized by the mundanity of the gameplay. 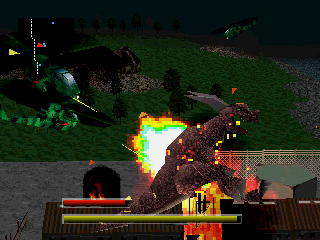 Your moveset is very limited with only three attacks, meaning you’ll be punching, kicking or head-butting everything over and over again. Collision detection is often dodgy, so trying to destroy a building can be more irritating than it’s worth. Helicopters and tanks repeatedly pelt you with gunfire and missiles, which combined with your slow movement make the bigger stages incredibly tedious.

This also extends to the presentation. Graphically, the game is somewhat impressive with its variety of destructible objects (including many New York landmarks such as, yes, the World Trade Center) and the occasionally cool skybox or suggested lighting through textures. However, the limited camera angles and hard-to-read color schemes make it hard to see where you’re going, and otherwise satisfying rampages become irritating. The sound design uses a handful of sparse, weak noises that lend little impact to the destruction you leave behind, while the hip-hop/rock music by Kouhei Tsuchiya grates with its repetitive beats interspersed with more whispered promises from the bug. 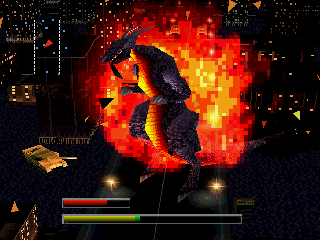 This is not a game where destroying buildings is fun, just frustrating – but that’s kinda the point. As your destructive rage increases, it becomes more and more clear how your selfish pursuit of freedom comes at the cost of the freedom of others. Rampaging through the streets of Tokyo and New York, you kill thousands if not millions of people, ignoring their wishes and desires simply because they’re not yours. What a truly selfish act: to value your own free will – an illusion of free will, at that – so much that you not only ignore but obliterate the free will of other people.

This comes to a head in the game’s finale, where you come to face to face with the Statue of Liberty: a symbol of the very freedom you are simultaneously seeking and destroying. Before you fight her, she asks you to consider the futility of your endeavor, that you will not really be free if you carry on like this. But of course, you ignore her and destroy her utterly. In the ashes of this fight, you discover a crying baby – the same baby your wife gave birth to and took with her when this destruction began. Your child. At this point, whether you realize it or not, you finally have a choice. 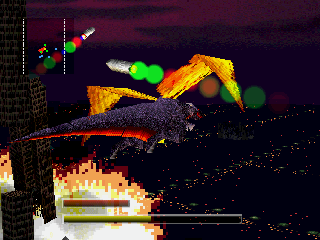 If you destroy the baby, you will return to being a normal salaryman, but discover that your child has been turned into a demon – the sins of the father are passed down to the son, and perpetuate the cycle of destruction you and likely others before you have wrought. But you can choose to leave the baby be and allow the yellow meter to drain. Doing this takes you back to the beginning of the game, back to the kitchen with you, your wife and child enjoying a peaceful breakfast. The demonic bug appears once more, but you kill it this time and proceed to hold the child in your arms.

Perhaps you can never attain true freedom, totally unrestrained by the restrictions of your reality, but you do have freedom in whatever circumstances you find yourself in. You have the freedom to be a kind person, a better person for yourself, the people you love and those around you, and the freedom to go and extend that kindness in the hope of creating a better world.

Hakaioh: King of Crusher is not the only game to utilize everything it has to express a theme, and certainly nowhere near the best or most renowned example of that kind of game. It’s possible that this review is overanalyzing what’s actually just a strange game. However, it’s worth celebrating nonetheless for what it suggests, and how it manages to go about that. Not bad for an otherwise goofy game about smashing buildings; not bad at all. 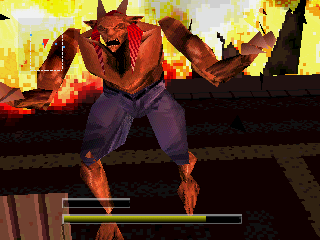 Most of the people who worked on King of Crusher only seemed to have done one or two other projects, but one name that stood out was character designer Naomi Iwata. Naomi Iwata is a mangaka likely best known for his blocky character designs in the TV shows Gregory Horror Show, Pecola and Midnight Horror School, for which he also wrote the scripts.

A Spanish fan translation patch, created by Mr. Nobody – https://www.romhacking.net/translations/5824/