Inherit the Earth: Quest for the Orb, designed by The Dreamers Guild and published by New World Computing, tells the story of our planet far in the future, when humans have gone extinct. In their stead are “morphs,” or anthropomorphic – walking and talking – versions of various animals. All of the different animal tribes live together in a rather tense balance, because each of their inherent characteristics causes tension. The elks are proud warriors, while the boars are loud, messy and stupid. The rats are old and wise, and the dogs are loveable, although a bit dim. The foxes are sly and clever, which is exactly what gets them into trouble at the outset.

In the midst of a festival, it is announced that the Orb, a mystical object from ages long past, has gone missing. Despite having only circumstantial evidence, Rif the fox is accused of being the perpetrator, for his race is known for being sneaky. He maintains his innocence, but his ladyfriend Rhene is taken hostage by the Boar King, as an “incentive” to stay on track as he attempts to get the Orb back. Still not quite trusting him, the Boar and Elk tribe send their own members, Eeah and Okk, to travel along with Rif to not only provide aid, but to keep him in check. Right at the beginning the trio discovers that the Orb was actually stolen by a member of the Raccoon tribe, who has long since disappeared, so their adventure takes them far away from home as they search the land for the mysterious thief. Along the way, they’ll run in with the other races on the planet, and explore the ruins of the long departed humans.

The point and click interface is pretty standard, although Inherit the Earth sets itself apart through its fairly large game world. Many adventure games consist of static screens, which are also in Inherit the Earth, but many of the towns and caves are expansive areas constructed with tiles, making them feel more like an RPG. There’s also an overworld map which is used to travel between locations. Although this provides a sense of scale, all of the running around feels remarkably tedious. Rif moves awfully slowly for a fox, and much of the time is spent meandering through dead space. The towns consist of a handful of buildings, most of which are useless, and the few important ones are unmarked. There are townspeople, too, although they rarely have anything useful to say. What’s worse in the game’s proclivity towards mazes. Not including the towns, there are four of them, and even the easier ones aren’t so much difficult as just really long, especially the ones you need to navigate through multiple times. There’s no doubt that this is all padding, because the game would be really short without these. 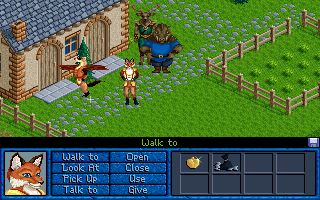 That’s not the say the game is all bad though.Inherit the Earth has maintained some measure of cult popularity, largely with the furry fanbase, for obvious reasons. According to one of the developers, the publisher was unaware that there was an adult population that might be interested in something like this, so the game was largely cut back and aimed at a younger audience. It’s pretty easy to tell, because the puzzles are quite straightforward and simplistic. Eeah and Okk serve little purpose, because the few times when they’re needed, the game automatically commands them to act.

Thematically, some of the violence had to be cut out, and some of the backstory involving the disappearance of the humans had to be removed, considering it had originally involved a nuclear holocaust. This is unfortunate, because the last third of the game, when you leave behind the Renaissance faire trappings of the rest of the world and delve into the depths of a run-down military base, is where the story really starts to get interesting.

Even though Inherit the Earth purports to be a kiddie game, it’s still far better than the average edutainment software, and in spite of its relative simplicity, maintains some appeal for an older crowd. Despite some of the repetitive scenery, the background artwork is excellent, full of lush greenery in the beginning stages, switching to a modern technological backdrop in later segments. The writing is decent, with each race possessing its own mannerisms, and the voice acting in the CD-ROM release is surprisingly professional. Rif is a likeable leader, and there are more than a few references that kids probably wouldn’t appreciate, including an homage to the Abbott and Costello “Who’s on First?” bit and a scene with poker-playing dogs, in reference to the famous paintings by C. M. Coolidge. A good amount of the humor stems from the way Rif tricks his opponents, which is best exemplified when he needs to grab some clay from the mud pool in the hall of the Boar King. He charges in and grovels: “I was going to come in here and beg for mercy. I was going to plead for clemency. I was going to grovel at your feet and appeal to you for the release of my friend. I was going to strip myself of every vestige of dignity I have left for your pleasure! But now…” – Rif covertly pockets some of the clay he needs – “I don’t think I’m going to.” He then promptly takes off. The Boar King blinks, perplexed. “Did I miss something?”

As a whole, Inherit the Earth is a fairly decent game, albeit one that could’ve probably used some trimming to improve the pacing. The Dreamers Guild intended for a sequel – the ending even featured a “To Be Continued” line – which never actually happened. Still, the developers have maintained an extreme amount of devotion to this little game. In 2000, they formed a company called Wyrmkeep Entertainment and ported the game, originally released for DOS and Amiga platforms, to Windows, Macintosh and Linux. These versions are still available on sale from the company’s website, and the game has also since been added to SCUMMVM, allowing it for play on nearly every platform.

In 2005, the artist started up a webcomic that acts as a follow-up, which focuses on the adventures of Rif and Rhene and includes many of the same characters. Their website even has a little mini game using upgraded graphics from Inherit the Earth, although it’s a simple Flash matching puzzle. In 2009 the game was ported to iPhone. 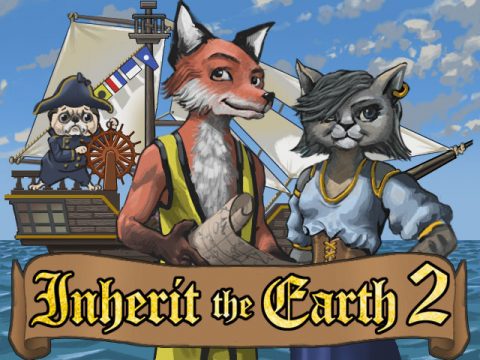 In early 2013, Wyrmkeep Entertainment tried to get Inherit the Earth 2 funded via Kickstarter, but the pitch wasn’t all that impressive, and after a slow start, Wyrmkeep cancelled the campaign. At least in the aftermath the original game appeared on GOG.com, making it yet more accessible to buy.

Under a Killing Moon
Night mode