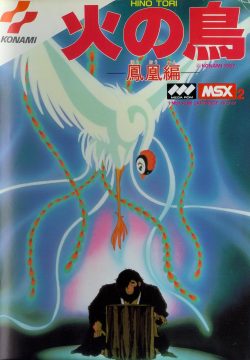 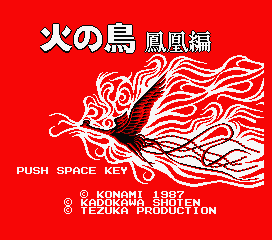 The MSX2 game from Konami is loosely similar in concept to the Famicom game, but now it’s an overhead shoot-em-up. You still control Gao, though the setup is much different. After killing his wife, he became overwhelmed with grief, and must fight the evil within his mind. However, much of the game still looks like Nara-era Japan. There’s no time travel or connection to the other volumes of the Hi no Tori saga. This version of the game also doesn’t have a subtitle at all. 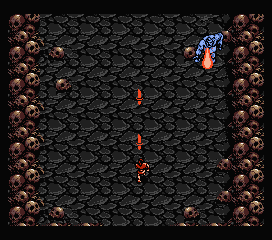 Gao marches forward automatically, somewhat similar to Popolon in Konami’s Knightmare. You begin the game with only throwing swords, but by collecting phoenix feathers, you can obtain new weapons. (Press F2 during gameplay to bring up the equipment menu.) You can also jump, which is helpful in avoiding enemy fire and leaping over water (though you can still wade through it unharmed).

The main element that the two games have in common is the looping, and finding warps between areas. Each stage loops and consists of several paths that run parallel to each other. You can switch between them by exiting the screen on the left or right sides of the screen. In order to progress, you need to find certain keys to open specific doors before you can fight the boss. Because of the scrolling, it’s possible to be crushed by the scenery if you’re not careful. It’s an interesting way to structure a shooter, even though you have to play the same segment over and over until you find the correct path. In some cases you even need to return to previously completed stages to find the required items. 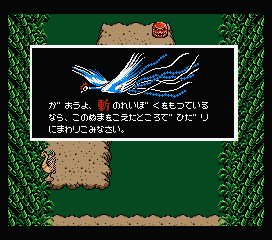 Obviously it’s easy to just play the game forever in circles and not really make any progress, so Phoenix statues are found throughout, which gives clues on how to proceed. An English fan translation exists to help parse these messages. You pick up automatically where you left off when you die, and when you run out of lives, you can resurrect at about the same spot, so death is more of an aggravation than a true setback. It’s still an extremely tough game, though, especially the boss fights. 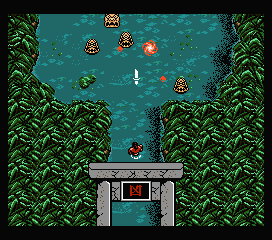 Thankfully there’s a password system that will help you through all six stages. Pause the game with the F1 key, then hit the Home key. It will give you your current password, and give the option to input another one. There’s also a cheat mode enabled by putting the Q*Bert cartridge in the second slot. 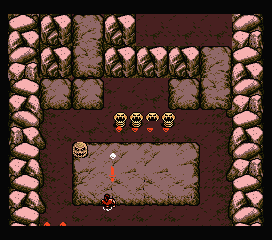 The screen scrolling is fairly smooth for an MSX game, if a little slow. The music is completely different from the Famicom game, and quite a bit better. The graphics are solid and make more a much more consistent looking experience, though conversely, it’s not quite as likeably weird. Like its Famicom brother, there are definitely better games in the genre available on the platform, but its structure makes it unique enough to make it worth checking out. 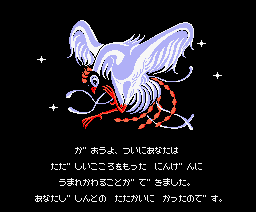