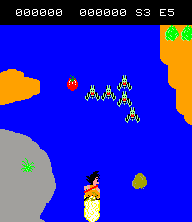 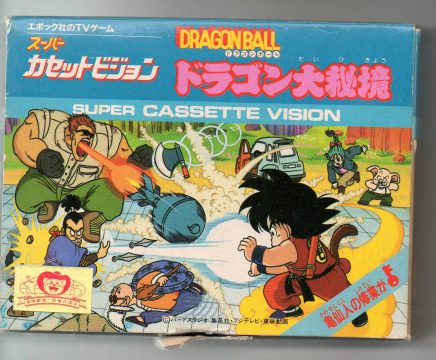 The Epoch Super Cassette Vision was released in 1984 to try and take on Nintendo’s Famicom, which had hit store shelves a year beforehand. It was the successor to a 1981 console named the Cassette Vision. While the Cassette Vision library will instantly remind anyone who even glances at it for a moment of the Atari VCS, the SCV could graphically stand up to – and even beat – many early Famicom titles. The system even managed to get released in Europe and sell moderately well under the name Yeno. However, the race was lost largely before it had truly begun and the SCV fell into obscurity, having only survived for two years. Epoch eventually began releasing games on the Famicom in 1989.

But even though the system had a very small library, it managed to acquire some pretty impressive licenses in its short time, including Doraemon, Lupin III, and even ports of some arcade and computer hits like Pole Position II and Boulder Dash. Amongst them also was Dragonball: Dragon Dai Hikyou. Interestingly enough, this game came out the exact same year as the much despised Dragonball: Shenlong no Nazo on the Famicom. If available release information is to be believed, however, Dragon Dai Hikyou preceded it by a good two months. And not only that, but for all its flaws, it’s still a much better product, though sadly the system’s swan song as well. 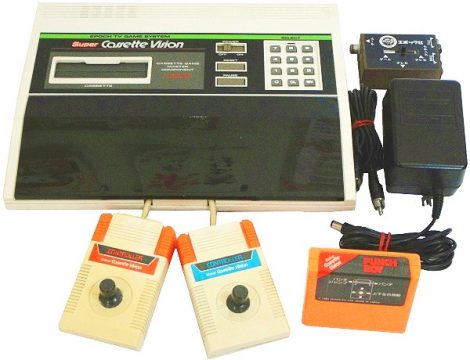 Right out of the gate the game surprises you by being… a shooter! Probably the last genre one would think of when someone says Dragonball. But remember that this was 1986, and the series wasn’t even halfway through its first, pre-“Z” phase.

You play as Goku, flying on the cloud Nimbus, using your staff (which bends so much it looks like it’s made of rubber) to attack airborne enemies while reserving your “Kamehameha” for ground based objects (think TwinBee, only much more destructive) though you can shoot stuff in front of you too, if you want. One of the first things a series-savvy player will notice are the faces of Gokus friends strewn all over the place. These award you points when collected, though sometimes they grant you other things like auto fire on the staff, the Kamehameha, or both (depending on whether you picked up Krillin, the Ox King, or Muten Roshi). Oddly, there is also a power-up needed in order to get to the top of the screen – at the start of the game, Goku can only go up halfway across the screen. Yeah, that’s no joke; you have to pick up a glowing red arrow which somehow gives Goku the ability to fly a tiny bit further ahead. You also lose it each time at the start of a new level. 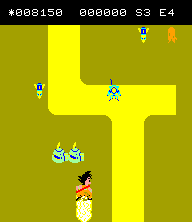 There are basically two types of enemies. Flying ones that try to bump into you in various ways (and the occasional fish), and ground based enemies throwing crap at you. This ranges from the giant rabbit to the Terminator cyborg thing to Pilaf. Some of them have an unique movement pattern: Pilaf will only run a short distance from the edge of the screen before leaving, the cyborg goes back and forth in short patterns, while the others usually just run from left to run/vice versa.

The end of each level consists of a large, seemingly barren area with many flying enemies and a whole bunch of containers on the ground. You have to bomb these to find the Dragonball that allows you to move on to the next level, and the area will loop around until you do. Sometimes you can find a sign that says “End” among these boxes. And what does it do? It kicks your ass back to the title screen. No, I mean it. It literally just restarts the game back to the title screen, at least from the first stage.

Finally, there is one more thing you can do in Dragonball: Dragon Dai Hikyou. A few times throughout the game you will see Muten Roshi standing on the ground below. If you touch him, you’re taken to a one-on-one duel with him, which takes place in a separate side view screen. The first fight is manageable, if a bit weird due to the odd hit detection and stiff jump controls, but the later two fights are impossible. Simply because Roshi can use the Kamehameha now and immediately starts spamming it right at the beginning of the fight. You have no time to run away and if you jump over the first one, you’ll descend so slowly that there is no chance to avoid the next one. Worst of all, the AI will spam these every time you land a hit, aside from going off on a timer, and it will never stop shooting until it hits you. If you manage to somehow avoid two shots, he simply shoots a third, and I never managed to dodge it. 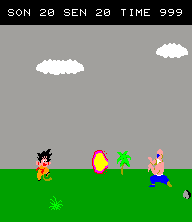 The graphics also aren’t too bad for 1984, even though you spend most of the game looking at Goku’s back and the characters’ faces are only seen during the fight with Muten Roshi. Compared to the Famicom game released two months later, they’re quite excellent. There also are some nice touches here or there, like when Bulma throws you a capsule from a ship and if you don’t catch it in time it hits the ground and turns into a vehicle of some kind.

Overall Dragonball: Dragon Dai Hikyou is a bit weird and has some odd concepts that one wouldn’t normally find in a shooter, even in one as vintage as this game. But at least they tried something else, and it mostly works. It’s worth giving this one a go, if only because it’s totally different then what one would expect. Super Cassette Vision emulation is still a bit iffy due to the system’s obscurity, but with some determination it’s possible to get the game running in MESS.