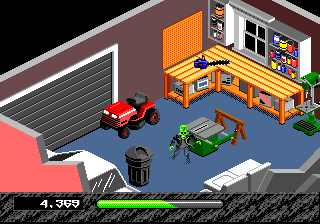 Vito Sardini is one cheap bastard. He owns and runs a skateboarding company and buys the cheapest parts to cut costs and obtain the maximum profit. The unsuspecting consumer (hint: that’s you) purchases one of Sardini’s poorly crafted skateboards and tests it outside when tragedy strikes: your board breaks from under you and you die upon impact.

But, you come back as a ghost! Given the new name Polterguy, you are now on a mission of revenge against the entire greedy Sardini family. How will you avenge your own death? By scaring the living crap out of each family member (four in all) of course! With each mansion the Sardini’s move to, it’s your job to make sure you give them hell and get them out.

The entire game you never interact directly with the Sardinis. In fact, they can’t even see you – since you are, after all, a ghost. The gameplay is centered around scaring them one by one, so the only way you can is from rigging or booby-trapping their furniture and personal possessions. This is where the game is at its absolute best. Most objects in the room can be rigged, in which you move your character next to the object and a little light will blink on the object. Depending on the color will determine on what style the object will be haunted. A blue light will mean that once you rig the object, it will shake violently and catch the attention of the Sardini who is in the room. They will examine the object, to which a hilarious animation of the object coming to life and the reaction of the person that is equally hilarious will appear. A green light lets you control the object to scare the Sardinis (like a remote controlled airplane or a chair that melts) while the yellow light signifies that you have to stay in that object until a Sardini family member comes by it to trigger the scare.

As mentioned earlier, each object has a different animation that is rather humorous and turns into a quest of seeing the effects of each object you can possess. An example would be inhabiting the TV, and then sitting back to watch the Sardini family member investigate it only to have the person on the screen kick right at them. Or having a cupid statue come to life and actually shoot arrows at the unsuspecting family. Or haunting a guitar that has its neck turn into a snake that breathes fire. Or jumping in a car and have a dismembered body show up in the trunk. Or inhabiting a chainsaw and…well, you get the picture. The animations of the reactions of the Sardinis are even more entertaining. Scaring the mother often causes her to faint, while most of the others usually just shake in place or drop their pants. My personal favorite would be when they piss on the spot, leaving a urine puddle on the ground.

However, the game isn’t all about scaring. In order to stay up in the land of the living, you must keep your ectoplasm bar. You lose ectoplasm for each scare you perform, but you can regain some back when you scare a member of the Sardini family out of the house, as they somehow leave a trail behind. If you run out of ectoplasm, you are sent to a cave like setting, frantically regaining your ectoplasm bar while avoiding obstacles such as punching walls. You can also acquire spells in this mode, such as Boo-Doo (which lets you throw an exploding object at people) and Ecto-Xtra (which doubles the amount of ectoplasm that is left after scaring someone). You can only do a spell once per house and unfortunately, they aren’t very useful.

The game is displayed on a 3/4 perspective, so controlling the Polterguy is a little awkward, and the controls are a bit loose as well. But the real disappointment would have to be the final boss. Not only is its appearance totally random (it’s almost as if they didn’t know how to end the game, so they threw it in there just for kicks) but it’s also incredibly tough. You don’t spend that much time fighting much of anything (only a few ecto-ghosts that attack you periodically after scaring a Sardini in the later mansions), so fighting him comes as a surprise and leaves you ill-prepared.

Haunting Starring Polterguy has its flaws – since it’s more focused entertaining the player with crazy animations than providing actual gameplay, it’s not too replayable. But what I’m trying to get at is just how innovative the game is. 1993 was a time were games were all about blasting the hell out of anything that moved or being extremely cool and jumping on enemies heads to save a princess or whatnot. This game had a totally different concept not only unheard of back then, but still isn’t exactly used today. The only game to really feature a similar concept is Nintendo’s underrated Geist for the GameCube. It’s even more surprising that such an interesting idea came out of Electronic Arts – now known for spewing out sequel after unimaginative sequel. Haunting is a snapshot back to their earlier, glory-filled days, and it’s really sad to think of what other interesting games they could’ve pumped out, had they chosen a more dignant path.

In 2006, EA released EA Replay, a collection of games that included the Strike series, the Road Rash series, Syndicate and included Haunting Starring Polterguy amongst others. The collection even has unlockable art for the games.