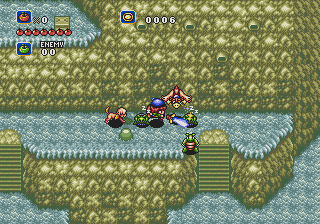 While the Genesis has a fondly regarded library of first-party titles, there’s many second-party exclusives that deserve as much recognition for what they accomplish. One of them is Crusader of Centy, a game that at first glance seems like SEGA’s equivalent of The Legend of Zelda: Link to the Past, but quickly becomes its own thing – a very compelling, enjoyable adventure worth playing.

Long ago, strange beasts that used to roam the earth were driven deep underground, but they’ve recently started to surface again. In the village of Soleil, a 14-year-old boy (named Corona in the US instruction manual) is given his father’s sword and told to go out into the world and become a warrior. However, on his journey, he’s given the ability to talk with animals and beasts, but can no longer communicate with his own kind. As he explores distant lands, he slowly starts to unravel the truth behind this world…

Centy is an action-RPG that plays from a top-down perspective, where your overall goal is to explore and overcome whatever obstacles face you. At first, all you can do is swing your sword, but you can learn to throw it at distant enemies and switches, jump over gaps, and lift certain objects to throw. Unlike Zelda, there aren’t any items to acquire, but there are animals you can befriend. You’ll find these animals on your travels, sometimes by helping them out or by buying them from a shop. The animals you buy have a one-time use, such as killing every enemy onscreen or bringing you back to life when you run out of health, while the ones you help out accompany you during gameplay.

You can pick two animals from the pause menu to accompany you, and each animal has a different ability. Some animals have an ability that’s activated with the C button, like an armadillo who turns into a platform for you to throw around, but most augment your abilities in some way. For example, Chilly the penguin gives your sword the power to freeze enemies when thrown, while having Flash the cheetah equipped will make you run much faster. You can even unlock more powerful abilities by having two certain animals at your side, encouraging you to experiment with different combinations and playstyles.

Also unlike Zelda, the world isn’t so neatly divided into overworlds, towns and dungeons. There are simply areas (accessed via a world map) that can change design or focus as soon as you hit the next screen. This lends a greater degree of variety in terms of level design, since it doesn’t have to conform to one specific location type or idea for the entire area. Occasionally, you’ll come up against frustrating obstacles such as wind that blows you about and secret doors hidden within walls, but the majority of levels successfully combine navigation, combat, platforming and puzzle solving. This also extends to the numerous boss battles, which employ unique strategies that you have to figure out to deal damage. Most of these result in enjoyably chaotic fights, though a couple of them are tedious in how they force you to wait before you can attack.

Something that Centy does remarkably well is creating a strong sense of spontaneity. From the unexpected level changes to amusing NPC encounters to the twists and turns of the story, you never quite know what’s going to happen as you head to the next area. Especially towards the end of the game when things start getting strange and esoteric, the whole game feels like a genuine journey full of surprises.

Aiding this is a well told narrative that’s got many light-hearted moments, but also contains many moments that are unsettling and heartwarming. While the plot often emphasizes the plight of the beasts you fight, there’s also a strong undercurrent throughout of self-improvement. Through your actions, characters frequently stop to consider themselves and their world before making the decision to become kinder, braver and ultimately better people. It’s handled with such a quiet confidence that the adventure becomes unexpectedly endearing, and what really elevates it above initial expectations.

That’s not to say Centy is without flaws. It’s quite slow to start off, since you need to grind for money to learn sword-throwing before you’re able to acquire any other abilities or animal buddies. While it mostly does a good job at explaining things to you, there are moments where you’ll have no idea what to do and could likely get stuck. Perhaps the biggest problem is that despite giving you a large world to explore, there’s only one route through the game. While there are sidequests to do, gold apples and cash bags to find, and even an optional area to tackle, you aren’t offered the ability to complete areas out of order or given multiple options at once to progress. It makes repeat playthroughs less enticing as a result.

Regardless, Crusader of Centy is a great adventure for that first playthrough, and one that’s strengthened by very solid presentation. The graphics have a bright and colorful artstyle, which is put to superb use through many distinct locations, changing palettes to reflect different moods for each area and a variety of impressive effects such as cloud shadows, footprints left in the sand and enemies utilizing multiple sprites. However, the effects can also cause the framerate to drop if there’s too many sprites onscreen.

Meanwhile, the music ranks as one of the Mega Drive’s more underappreciated soundtracks. Composed by Motokazu Shinoda (a pianist otherwise best known for scoring, of all things, Demon City Shinjuku), the tunes are bouncy and upbeat, backed by catchy melodies and excellent instrumentation. There’s also a selection of tracks that venture into other genres and make certain sections stand out, resulting in a varied and memorable soundtrack.

Interestingly, the game received two separate English translations for its American and European releases, done by Atlus and presumably SEGA respectively. As expected, there are various minor changes for animal and character names among other things, though the only real difference is in the tone. The European translation is more elaborate and serious, while the American translation is more concise and occasionally tongue-in-cheek. Though both translations are very good, the European one does a better job at hinting what you need to do and communicating certain information, so you’re best getting that version.

Like other Atlus published games, Crusader of Centy had a limited print run in North America and was perhaps overlooked in the interest towards next-gen consoles, meaning that physical copies are quite rare. Combined with the hugely increased price in pre-owned copies and a lack of re-releases, emulation is likely the only way to play this without spending a silly amount of money.

The developer, Nex Entertainment, would later create the cult classic action-RPG Linkle Liver Story for the Saturn. Many of the concepts seen in Centy such as animal buddies and a top-down perspective are carried over into Linkle, albeit at a slower pace with more RPG elements.