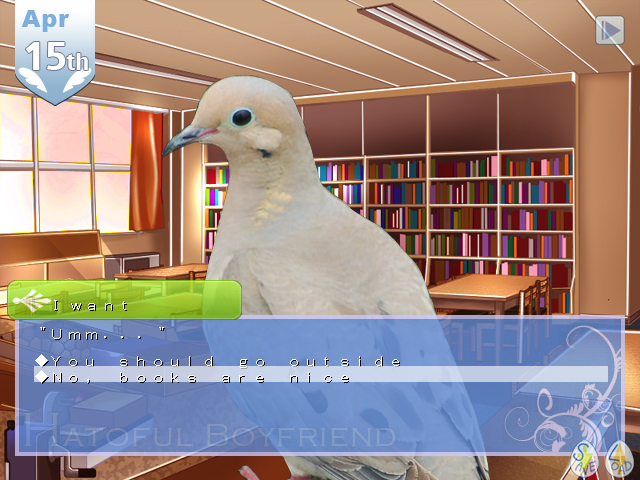 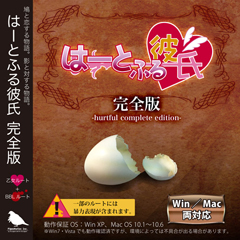 The Internet is full of surprises, though the jury’s ultimately still out on whether that’s a good thing. This particular instance definitely works in its favor. Hatoful Kareshi ~Kibou no Gakuen to Shiroi Tsubasa~ is one of those bazillions visual novels released each year in Japan. It’s the first game developed by the Hato-King doujin circle (who went by the name PigeoNation Inc. for this project), and it was digitally released for Windows and Mac in July 2011. Obviously, it’s only officially available in Japanese, but a swell guy named Nazerine decided to translate it all by himself, and merely five months after the original release, an English-language patch was made available. It’s now commercially available on Sony consoles.

Talking about the translation, the game’s title is a bit peculiar – indeed, it’s an untranslatable pun. “Hatoful” is a transliteration of はーとふる, who can be understood as both “Heartful” and “Hurtful” since they are pronounced the same way in Japanese (“hatoofuru”). The word “hato” is also a type of pigeon. The title can thus be translated to something along the line of “Heartful/Hurtful Boyfriend ~White Feathers in the School of Hope~”. Well, that’s pretty cool…but what sets this one apart from the scores of school romance visual novels that clutter up their shelves? The fact is Hatoful Kareshi isn’t exactly like the others. For sure, it has a whole load of clichés when it comes to character development or dialogues, amongst others. Friends from childhood? Check. A teacher to romance. Check. Character that’s actually dead? Check. (See Kanon, at the very least, for that reference.) Pudding obsessed characters who have their own blogs? Well, that’s…pretty original. It’s not an eroge either, but we can hardly call that something “original”. Why in the world, then? Well, what makes Hatoful Kareshi stands out is the fact that…

…the cast is comprised entirely of pigeons.

In this visual novel, you assume the role of a young girl (whose default name is Hiyoko Tousaka) who starts a new year at the bird school of St. PigeoNation. Which is odd because you are not a bird yourself. That’s right, you’re a human being in the flesh, and yet you attend a bird school, which means you’re the only human amongst the feathered students. The most unsettling part of this is the fact that the scenario actually jutifies this strange state of affairs. And in the creepiest way possible, on top of that, which won’t be spoiled here, but it’s probably worth the nervous breakdown it induces.

So, you start attending St. PigeonNation, and you meet your new (male) classmates, all of which are unfamiliar faces with the exception of Ryouta, your childhood friend. And, of course, all these playboys have the common trait of being birds. If the screenshots haven’t clued you in yet, they’re the real thing – not some kind of anthropomorphic furries or anything, the characters’ artwork are actual photographs. You can enable the display of human portraits, who are said to be the voice actors (even though there is no voice acting whatsoever) in order to catch a glimpse of what these birds would look like if they were bishounen… but these artwork only appear once per character and real men choose not to enable this option anyway, as a feeling of fondness towards birds is necessary to truly enjoy Hatoful Kareshi. Sort of.

In the end, it’s almost outstanding. It’s a very small-budget (if there was a budget at all) visual novel developed by an even smaller doujin circle, it’s available for download for free, and it’s about pigeons. And yet, the quality of production is certainly up to par. Of course, it’s incredibly campy, it’s even kusoge as its best! But the game in itself is actually well-paced, and perfectly enjoyable to play, and it’s on the level of many visual novels developed by more recognized doujin circles. Even the soundtrack, apart from its obligatory chessiness, fits the game very well.

Indeed, this is an interactive visual novel – at several points, you’ll be prompted for choices. Amongst them are of course multiple answers during dialogues, but it’s also possible to choose which class you attend for the day. There are three of them (maths, gym and music) and they’ll allow you to increase your stats in its matching field (wisdom, vitality and charisma, respectively). The decisions you make and the evolution of your stats will have an influence on the scenario and on the course of events associated with it, as well as the possibility to get more “intimate” with a bird in particular. Yeah, that’s right, each bird has its own ending! There’s even an unnecessarily dark “bad end” for avoiding any of the main love interests. Several playthroughs will be required to truly complete the game, and you’ll have to try different combinations of decisions and stats to unlock new paths. They even included 30 saves blocks as well as a fast-forward button to ease the tedium a bit. Of course, these are all basic elements of visual novel design, but a genuinely bad game would have managed to mess it up somehow… which is something Hatoful Kareshi didn’t fall down to. Hato-King really did take this project seriously!

That’s it. Hatoful Kareshi is a real blast. It does to visual novels what Cho Aniki does for shoot’em-up or WarioWare does for party games – it willingly creates something awkward, and does a great job out of it. Just try it out, should it be only for one ending – playthroughs are real short, often less than an hour, and always ludicrous.

By the way, it seems a (very) underground Japanese audience was not left unmoved by this visual novel’s odd charm to such great lengths, that a lot of official merchandises followed the release of the original game. A physical version of the game with additional content (new paths, new events and even a new character) was released as Hatoful Kareshi ~Kibou no Gakuen to Shiroi Tsubasa~ Plus for the price of ¥600 (around $8). Even better, a collector’s edition was also released as Hatoful Kareshi Kanzenban -hurtful complete edition- for the same price – it also serves as a “definitive” version of the game (with even more extra content) and contains a limited edition PigeoNation student ID card. Unfortunately, none of these versions have been translated (…yet?) More recently, what seems to be a sequel or spin-off titled Hatoful Kareshi HolidayStar has been released as well, but almost no comprehensible information is available on this topic as of his writing. A manga was also published, and goodies such as pin’s, postcards and cloth bags are available as well. But the most unbelievable is yet to come: Frontiers Works is currently working on a drama CD based off Hatoful Kareshi. Yup, the guys that produced audio dramas for series like Steins;Gate, Highurashi no Naku Koro ni or Lucky☆Star.

Once again: Try Hatoful Kareshi. Put your assumptions aside, and try it out. There are a bunch of walkthrough videos on YouTube, so you can watch them if you’re stuck, or simply if you don’t feel strong enough to play the game by yourself… which is understandable given how bizarre it is, but would still be a saddening error on your part.