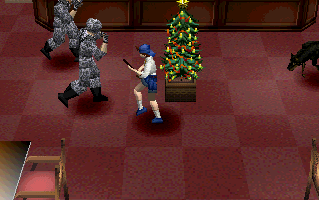 When 3D began taking over in the mid ’90s, the beat-em-up genre was already past its prime. Attempts at translating the genre into this new dimension were few and far between, and when the rare high profile release was widely cast as a disappointment (Fighting Force), many were quick to declare that “beat-em-ups don’t work in 3D”. This isn’t entirely true, as Sega’s Die Hard Arcade did a fine job of it.

The designers at Softmachine was probably familiar with it, and when this small, nearly anonymous outfit decided to step up and produce a 3D beat-em-up of their own after years of pachinko games and the like, they naturally took it as a model. While the original Dynamite Deka paralled the movie Die Hard closely enough in plot and premise to acquire its license outside of Japan, Crisis Beat turned to the Die Hard – inspired Under Siege – whether it did so before Dynamite Deka 2 is hard to establish, as they were both released the same year in Japan. In this 1992 Steven Seagal vehicle, a group of terrorists use the captain’s birthday party as a pretext to infiltrate and take over a large battleship with the help of a traitorous officer, holding most of its passengers hostage in the main room. All of these plot elements are repeated here with slight variations (it takes place on a cruise ship instead, for one), along with a specific scene in which a protagonist manages to call for help by radio, only for the would-be rescuers’ helicopter to be shot down by the terrorists before it can even land. 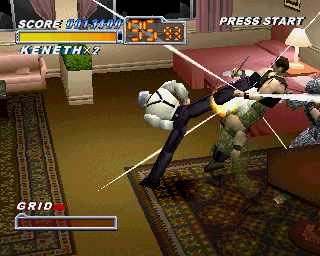 Whereas the American movie’s hero is a habitual superhuman Navy Seal with all-encompassing military knowledge, the cast of Crisis Beat has more of an anime feel, as demonstrated by the cover art. They are divided into two pairs, each of which goes through its own first stage before joining up for the rest of the game. Eiji Garland, a boyish NY detective prone to saying corny things pairs up with Julia Jefferson, a Belgian wrestler looking for her kidnapped friend (which just happens to a little girl). Meanwhile, Russian secret-agent-on-a-mission Keneth Kirova is too cool to take his hands out of his pockets and British teenage girl Han Feisu grabs a broom from a janitor’s closet to use as a weapon when the mayhem kicks off. The villains are also typical of Japanese entertainment, gibberish-spouting megalomaniacs killing for nonsense motives. Maybe that particular cliche is a response to the Aum Shinrikyo cult members’ poisoning dozens of strangers on the Tokyo Subway for similarly insane reasons? 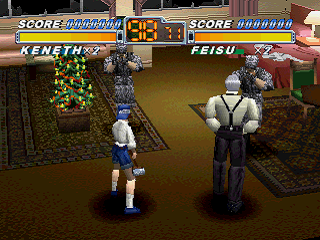 The mediocre story nonetheless has the merit of tying the action together and providing the occasional amusing moment, sometimes intentionally but mostly on account of its bad writing and Engrishy subtitles: 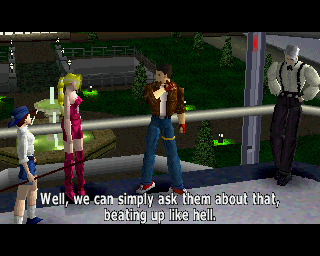 There’s a compelling reason to ignore said story, however; the English version being an European exclusive, it’s afflicted with the infamous PAL curse, slowed down to 50 frames per second rather than 60. This is not a game that can afford to be any slower and duller.

Initially it seems pretty fun. Punches and kicks have a nice, snappy feel, with efficient audio and visual cues to underline their impact. There are two attack buttons, one weak and one strong, than can be combined in a few different ways. Eiji, as the standard average fighter, is pretty boring, but pulling supplexes and screwdrivers as a lean young woman is rather cool, as are Keneth’s laid-back kicks and Han Fei’s fast-paced combos. This all goes to waste when you realize your enemies have no intention of hurting you. They may look like gun-wielding terrorists, but they’re really pacifists deep down; at least, that’s the only way to explain their complete lack of aggressiveness. When you do get hit, it’s usually with something pathetically weak. Even the bosses, as big and menacing as they get, can be pushed into a corner and bullied like schoolchildren. The only opponent to put up a fight is the final boss, and even then, only in his second form. This is a game you’re likely to finish with more lives than you started with, the very first time you play it. Setting it to Hard doesn’t help matters as it mostly just gives the terrorists more health, slowing down the pace even further. 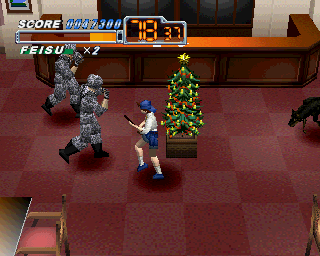 That leads to the second major flaw. The stages are divided into shorter scenes, in which you fight a certain group of enemies within a restricted area before running on to the next scene. Most of those scenes are too long, and there are usually too many per stage. For some reason, the first is the worst by far, particularly Eiji and Julia’s, so that by the time you reach the first boss you’re already desperately searching for ways to keep things exciting. The two attack buttons do allow for a few different combinations, but each character has a definitive combo, rendering the rest redundant. There is only one item that functions as a proper weapon, a knife or baton, it’s hard to tell. It which knocks opponents down in one hit, but does too little damage to be useful. For the rest of the weaponry, Crisis Beat takes a strangely passive approach; rather than letting you grab furniture to use as you please, you can walk up to it and press the attack button to either flip or spin it around on the spot, hopefully hitting a nearby enemy. Even machine guns just shoot by themselves as your character pulls a 360, emptying the clip at random. It’s a nice way to clear up a room, but it’d be a lot more fun if you could shoot them on your own. 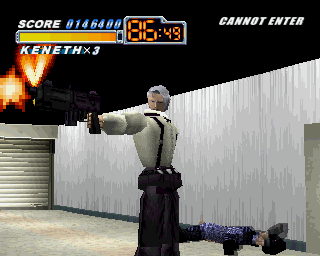 The one feature that really works is the so-called “Lock-On Counters”, which don’t actually involve countering anything, but are in fact flashy combos triggered by hitting an opponent whose back is to a piece of furniture, railing or window, usually resulting in a spectacular death and a large score bonus. Pulling them off is facilitated by the ability to grab and move enemies around, but they can only keep boredom at bay for so long. The intense arcade-style music helps, too… when it’s there. There are only ambient sounds during exterior sequences, which manages to make them even less exciting. 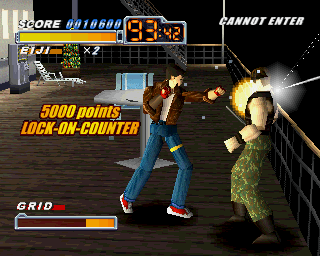 The graphics are about standard for a 3D PS1 game. In action, it doesn’t look so bad, and you can usually tell what’s what. It even adopts unusual camera angles at times for pretty interesting results. There’s also a handful of CG scenes thrown in. They stick to showing the ship, helicopters and explosions, so they haven’t aged too badly. 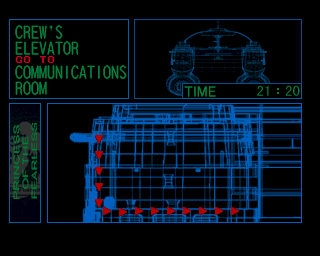 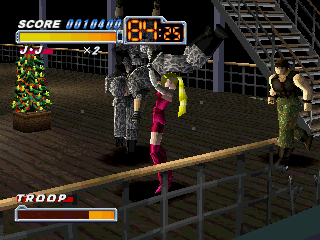 Crisis Beat got two budget re-releases in Europe and is available on the UK PlayStation Store as of this writing.