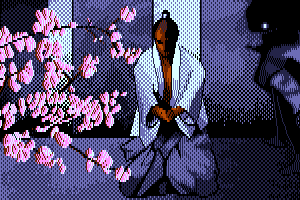 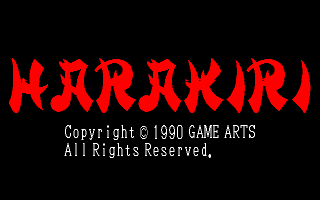 “I don’t know how much the rest of you know about Japanese culture (I’m an expert), but honor and shame are huge parts of it.”

This was a famous meme from video game forum NeoGAF, involving a poster who thought they knew much more about Japanese culture than they actually did. Incidentally, that same misinformed view plays the basis for the PC-88 strategy game Harakiri (though it was developed nearly two decades before the above message board post, obviously). It seems like a typical Sengoku-era simulation game, similar to the type made popular by Koei like Nobunaga’s Ambition, but it has a more subtly humorous bent to it, as it was purported to be designed by “JS Stainberg”, an American studying Japanese culture and history (and getting it wrong). For example, many of the generals you can play as have nothing to do with the Sengoku era. Many of these peculiarities will go over the heads of anyone unfamiliar with Japanese history, but there are some recognizable jokes – Ieyasu Tokugawa here is played by famed actor Mifune Toshiro, and one of the characters is basically Sho Kosugi, famous for any number of karate and ninja action movies. Among the usual combatants like cavalryman and samurai, there are also ninjas and sumo wrestlers. 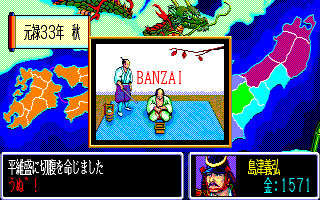 But by the far the most thematically amusing element is the “shame” statistic assigned to each daimyo, based on the long-held stereotypical view of the Japanese. If they win, it goes down; if they lose, it goes up. There’s no way to dismiss a failing daimyo and you can only command twenty at once, so to get rid of them, you order them to commit harakiri. It’s incredibly callous they way you can order your underlings to take their lives, and it’s an added joke that some characters start with incredibly high shame levels by default. Suitably, the foreign invaders, like Kublai Khan and Matthew Perry, start with zero shame levels, since it’s apparently such an innately Japanese concept. 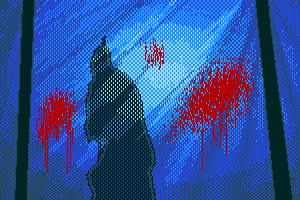 The theme of this game is also similar to Hudson’s Tengai Makyou series, seen elsewhere in this book. It was developed by Takeshi Miyaji, the founder of Game Arts, who also played pivotal roles in the Silpheed, Lunar, and Grandia series. The game’s system was reworked for the Mega CD game Tenkafubu: Eiyuutachi no Houkou, though without the parody elements. Incidentally, the Japanese retro game scene views the SNES title First Samurai, a Japanese-themed title developed by British studio Vivid Image, as a real-life example of a game based on the misconceptions of Japan by a foreigner.