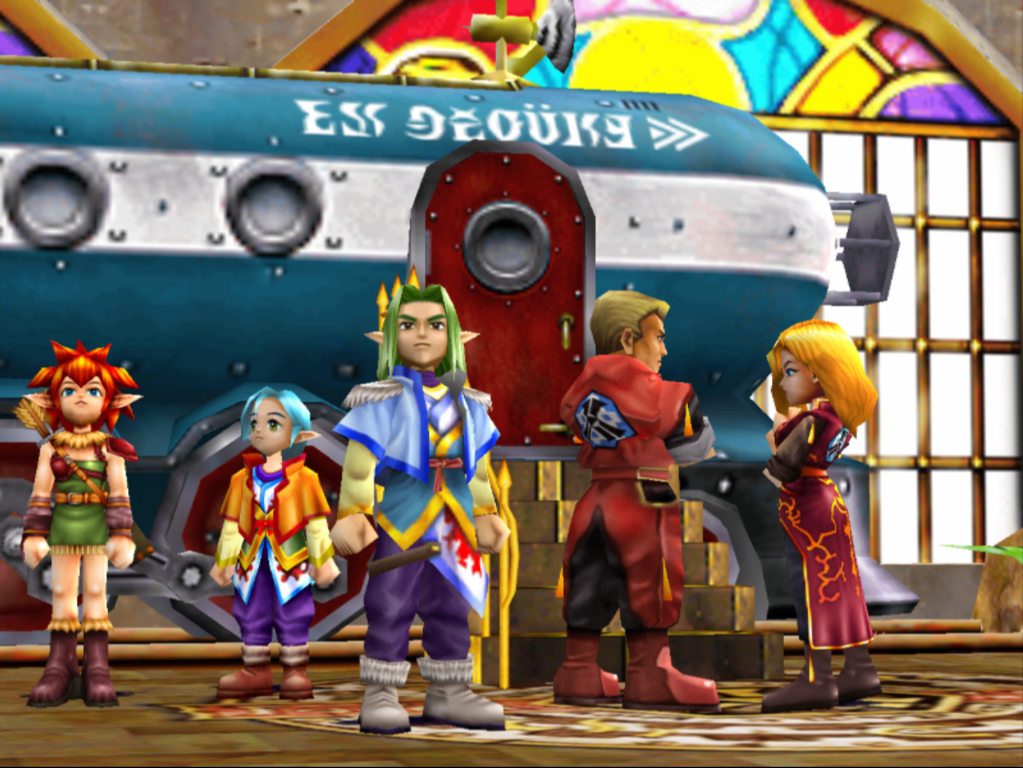 Grandia Xtreme is almost a good game. It hosts many of the themes and quirks that make Grandia games so endearing and its battle system vies with Grandia III for the best in the series, but it restricts itself with a thin narrative and endlessly repetitive, padded-out gameplay.

Evolution: The World of Sacred Device and its sequel Evolution: Far Off Promise (trimmed down and compiled into Evolution: Worlds for the Nintendo Gamecube in 2002) were middling 1999 Dreamcast JRPGs with a heavy focus on dungeon exploration–the sequel even including randomly generated maps–and a thin approach to narrative. Developed by Sting, later famous for such titles as Rivera: The Promised Land and Ygrassil Union but known at this point mostly for Treasure Hunter G and the original Baroque, Evolution is a totally fine experience. If simple to a fault, it had charming weapon-themed characters (the protagonists are named Mag Launcher and Linear Cannon), cute, colorful graphics, and rewarding dungeon crawling for those who enjoy that sort of thing. Evolution did not make outstanding sales, it did not make waves, but Game Arts decided it needed to emulate and surpass the Evolution formula. So it made Grandia Xtreme. 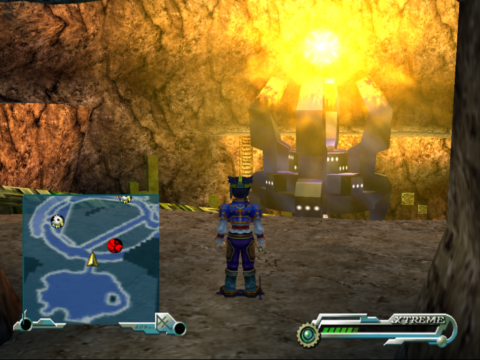 Xtreme takes place after a catastrophe known as the “Elemental Disorder,” which continues to cause devastating natural disasters according to the base four elements of water, fire, earth and wind. These disasters threaten the shaky peace established between the world’s three primary races: Humans, the elf-life Arcadians, and the beast-like Hazmans.

Humanity’s Nortis Army mobilizes to research the disorder. In doing so, it recruits seven individuals from all races to explore the ruins at the epicenter of each element’s disorder. 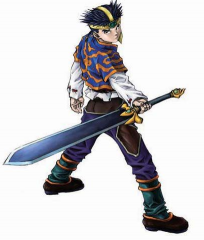 Primary protagonist and leader of the group. A young human ranger. Very close to Ryudo in terms of personality. More approachable though about as bratty. Uses swords. 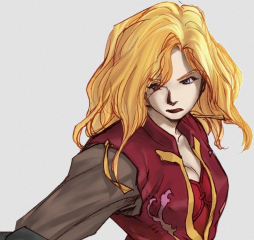 A Nortis sergeant with a flirty, easy-going personality. Uses sabres. 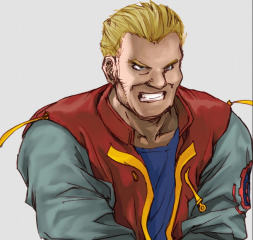 A brash Nortis soldier with a prejudice against Arcadians. Has a soft side. Interested in engineering. Uses longswords. 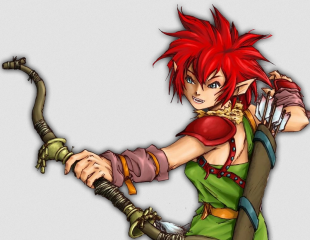 An Hazman archer. Carefree and a bit scatterbrained. Uses bow and arrow. 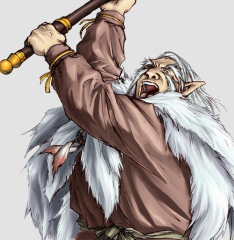 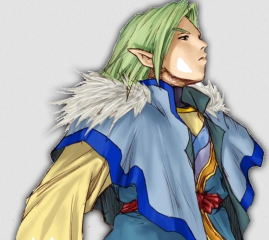 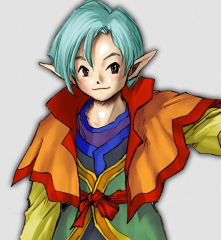 A timid Arcadian, only comfortable around Jaid. The fast, thief-type of the group. Uses knives.

And after the party explores the first four elemental ruins, one more character joins: 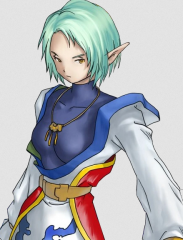 An Arcadian officer. She appears cold-blooded at first but eventually warms to the group. Uses daggers. 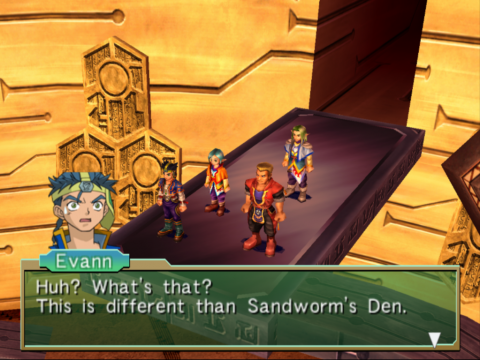 The characters, varied and with their weird nearly-normal names, are wonderfully designed, bright and colorful in that distinctively Grandia way. Kamui Fujiwara, who also designed characters for Terranigma and drew the manga adaptation of Dragon Quest VII, does a good job making them stand out and look interesting. There are some strange details, granted, like the visor on Evann’s headpiece that blocks out his peripheral vision on one side (this is actually a kind of Japanese biker helmet—check out Toshiro Mifune in the film Scandal for a real world example of one), but Xtreme is kind of a silly game anyway, so it’s suitable.

None of the characters are well-fleshed out in general, but they’re at least distinctive. Each has a simple but clear role in the group.

Four characters can be in the party at a time. Occasionally a character will be required to join the party for a dungeon, and this usually means they get some modicum of backstory during the pre- and post-dungeon crawling sessions. These scenes are never deep or especially interesting, but they’re welcome as they provide the characters with some amount of personality in an otherwise barebones narrative.

The voice acting isn’t good across the board. Titto, for instance, looks like a dainty cherub and sounds like a monotone stoner bro. The voice cast does have some interesting standouts, however, like Mark Hamill, who hams it up beautifully as Kroitz, Evann’s childhood rival and a leader in the Nortis Army. Evann himself is performed somewhat middlingly by Dean Cain, who starred as Superman/Clark Kent in Lois & Clark: The New Adventures of Superman and later gained infamy as a vocal Trump supporter, in his only video game voice acting role. He basically just yells all his lines. The oddest cast member is Lisa Loeb, 90s singer/songwriter of “Stay (I Missed You)” fame. She plays Lutina, and does a pretty okay job. 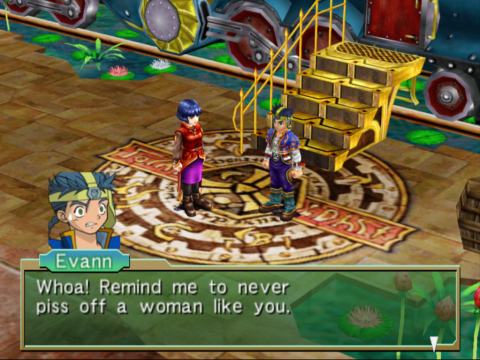 The graphics are pretty strong considering the time and scale of development. The colorful world may be a bit samey but it’s nice to look at. Monster designs can get downright gruesomely creative, carrying on an aesthetic established with the various manifestations of Valmar in Grandia II. The towns are amusing to walk through because most objects are interactive, with silly things like bottles rattling, barrels getting knocked over, and mounted fish springing around, just for the fun of it.

Grandia’s dungeons are par for the course in a Grandia game. Switches and levers, doors opening, bridges moving. Nothing special, little complexity. Lots and lots of on-screen monsters. One difference from past games is that in dungeons the point of view switches from overhead to a more behind-shoulders view.

You can’t save inside dungeons but have to travel back into town, which you can teleport to through Geo Gates. These are usually positioned at the very beginning and end of the dungeon. There are some Geo Gates you can only travel back through.

As the game goes on, it begins to introduce randomly generated dungeons, which is when Xtreme really begins to go downhill. The first four dungeons, while not exactly mind-blowing, are at least rewarding in the sense that there is a clear path to the finish line, you feel the sense of progress as you get further in, and they’re pretty to look at in the meantime. The first four dungeons will probably take the average player an hour or two to beat each, unless they go back to save. But once the game introduces randomly generated levels, it becomes interminable, seriously padding out the game in the most repetitive way possible.

Another egregious example of padding is how Xtreme occasionally closes all the Geogates you previously accessed. It is split up into four chapters, and Geogates close every time you complete a chapter. This is because the older dungeons are re-populated with more dangerous enemies – even bosses respawn – and the game rewards replaying these old dungeons because it makes level grinding easier. But in terms of design, in a game that is already so linear, with dungeons so similar to each other, it makes no sense to revisit old ones except to pad out the game’s length. 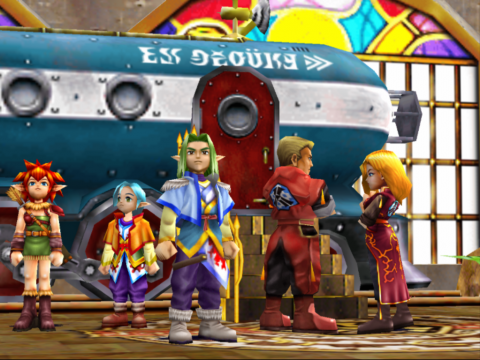 There is even a 100 level randomly generated bonus dungeon, the Vortex Corridor. This is accessed in the post-game, once you’ve finished the story proper. One walkthrough writer sums it up nicely by calling it “pure frustration.” It plays music from previous Grandia games, which is a nice touch, but the real reason to check it out is that it offers a secret second ending.

The battle system, as noted, is the real draw in Xtreme. Everything from previous games returns with some changes. For example, Mana Eggs are now part of an elaborate fusion system. You find plenty of base elemental eggs lying around in dungeons, and can equip them and swap them out just like Granda II, but now in town there is a way to fuse the eggs together to develop even more powerful magic. The fusions can be re-fused to make even more powerful magic. There are 42 eggs with eight levels of strength to be discovered.

Skill books return from Grandia II with a more in-depth approach. They offer characters physical bonuses to raise various stats, mental bonuses like higher elemental damage, combat bonuses like higher damage against certain enemy types, and “special” bonuses like better item drops and doubling experience. Skill books level up if equipped, and selling high-level skill books to the skillman nets you points for his shop, which offers items not found anywhere else.

Special skills also gain another level of intricacy here: Like magic, they level up with increased use. They still require SP to use like in Grandia II. Leveling them up means they are not only more powerful, but they are activated more quickly too. Characters all have four or five special skills total, and they’re important to keep up with because they’re the key to another facet of the battle system: Combination Arts. 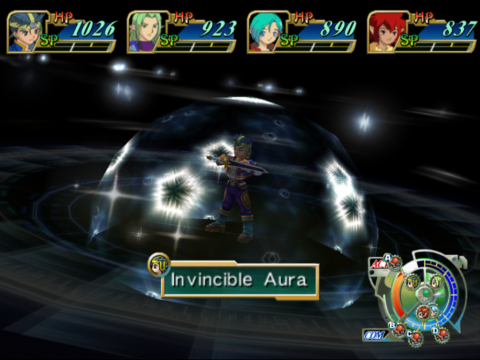 Combos are, as the name suggests, skills used by multiple characters at once. These are activated when one character uses a special skill and another character in the party has already unlocked a compatible skill. If Evann has X-Slash and Myam uses Spin Wheel, for example, their combo art Swallow Smash will activate. Although four characters can be in battle at a time, combos only ever go up to using three characters. These skills also drain SP for every character involved except on the first use. Often, in terms of strategy, they aren’t actually worth using for this reason.

Noriyuki Iwadare returns as composer. The theme song is another sweeping fanfare like past games, with brass and a majestic feel to it, reminiscent of certain tunes in Joe Hisaishi’s soundtrack for Castle in the Sky. The town music can be somewhat obnoxious with its repetitive, pounding beats, but the use of woodwind is a nice touch. The flamenco-style guitar in the regular battle music also makes for a great, unique sound.

The first shipment of Grandia Xtreme in Japan offered limited edition goodies like a branded clock, a Geogate diorama with a depiction of Evann, and a mini Grandia tote bag.

Xtreme is a good game stretched too thin. The art can be beautiful, the music fantastic. The battle system is fast, fun, dynamic, and the various characters offer a lot of different options for playstyles emphasizing speed, magic, strength or any combination thereof. Even the threadbare story and basic characters have their appeals. But its repetitive approach to dungeon design eventually makes it a chore to play.